Kingdom, Netflix’s newest original series, has arrived at a time where demand for fresh Korean content on digital platforms is red hot. After acquiring exclusivity rights to distribute hit Korean series Mr Sunshine globally, Netflix’s decision to finance and create a wholly original South Korean production is certainly a bold move for the streaming giant as it makes its own advance towards the world of Korean dramas.

And to show that they’re serious, Netflix has enlisted big names to breathe life into Kingdom. Writer Kim Eun-hee adapted her own web-toon, The Kingdom of the Gods, for the screen and was previously responsible for writing the extremely popular drama, Signal. Helming the series as its director is Kim Seong-hun, best known for popular films like crime-comedy A Hard Day (2014) and disaster picture, Tunnel (2016). The cast too is impressively stacked, comprising of name actors Bae Doona, Joo Ji-hoon and Ryu Seung-ryong in leading roles.

Furthermore, the series is an exciting fusion between historical drama and zombie horror which will only further whet the appetite of genre fans looking for something a little different.

Set in Joseon-era Korea, Kingdom is founded on a power struggle between the Hak-jo clan and the Crown Prince Lee Chang (Joo Ji-hoon). The chief councillor, Jo Hak-jo (Ryu Seung-ryong) has a strong monopoly of power in the imperial court and has maneuvered his daughter into the position of Empress. When the Emperor is incapacitated with a mysterious illness, the Crown Prince takes it upon himself to investigate his father’s illness and its connection to a mysterious illness breaking out in a village. 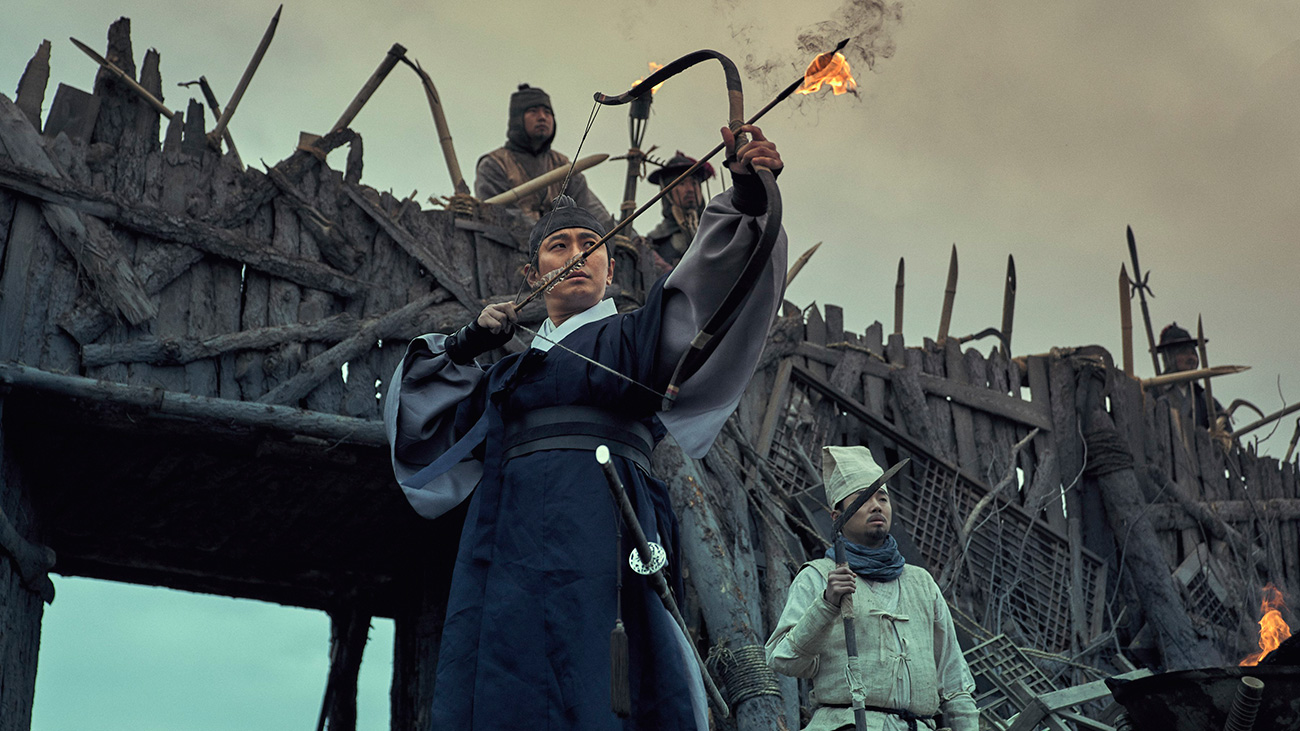 Though Kim Seung-hun may not seem like the most obvious choice to direct a story like Kingdom’s, he very gamely shows off what he can do with the budget Netflix has given him. Kim has produced some truly spectacular set-pieces in Kingdom which include memorable scenes of a village burning down from across a river and a haunting fight with zombies in a wheat field. There are also many stunning shots of the Joseon-era countryside. One shot in particular of a river surrounded by autumn colours may appear to exist purely as an aesthetic choice, but when the final revelation of the season sets in, it becomes clear just how purposeful every shot of this series is.

Director Kim’s flair for creating intense cinematic moments in confined spaces comes through in Kingdom as well, particularly during a harrowing zombie attack in a tiny village prison and chase sequences between the zombies and the villagers through the village’s crawl spaces.

As far as what you may expect from a fusion of Joseon-era politics and zombie horror, the series doesn’t necessarily tread new ground in either genre. What it does do however is package and deliver them in the best possible way. Most of the narrative beats that Kingdom undergoes will be familiar to anyone who has watched any number of East Asian historical dramas. The scheming chief councillor, the Empress and her secrets, the Crown Prince trying to prove his worth, ministers with their own agendas — these are all familiar characters. International viewers who may be less familiar with East Asian historical dramas however may find the series’ political intrigue, and how it relates to the zombies, entirely engaging, thus adding a layer of complexity and interest never before seen in the zombie genre.

Like South Korea’s other big zombie hit, Yeon Sang-ho’s Train to Busan (2016), and its prequel Seoul Station, Kingdom also uses the zombie genre for social commentary. The yangban (nobles) are portrayed as mercenary, self-serving and entitled, and even the matriarch of a noble family who only wants to preserve her son’s memory is ultimately foolish and leads to destruction. These terrible traits exhibited by the nobles are starker when the zombie epidemic hits and everyone is forced to make difficult decisions. It is clear that the peasants will always be the ones that ultimately suffer. Even before crisis strikes, it is already shown that people are suffering from famine while the nobles plot and struggle for power in their ivory tower. One of the key events that sets everything in motion happens as a result of a village’s starvation, after the government fails to send rations to help their people. The peasants are also frequently treated as disposable for the people in power.

As for the zombie aspect of Kingdom, it is a lot of fun for anyone who’s a fan of zombie media. They are the fast-moving kind, and are often depicted as having more in common with vampires (such as their fondness for biting the neck and a seeming aversion to the sunlight). As Kingdom’s social commentary indicates, the zombies are merely a fun, if gory, and entertaining feature for the real story to be told. Still, there’s plenty to enjoy with the zombies, especially when they attack the noblemen (they deserve it!), and when we discover more and more about their lore and how they came to be. 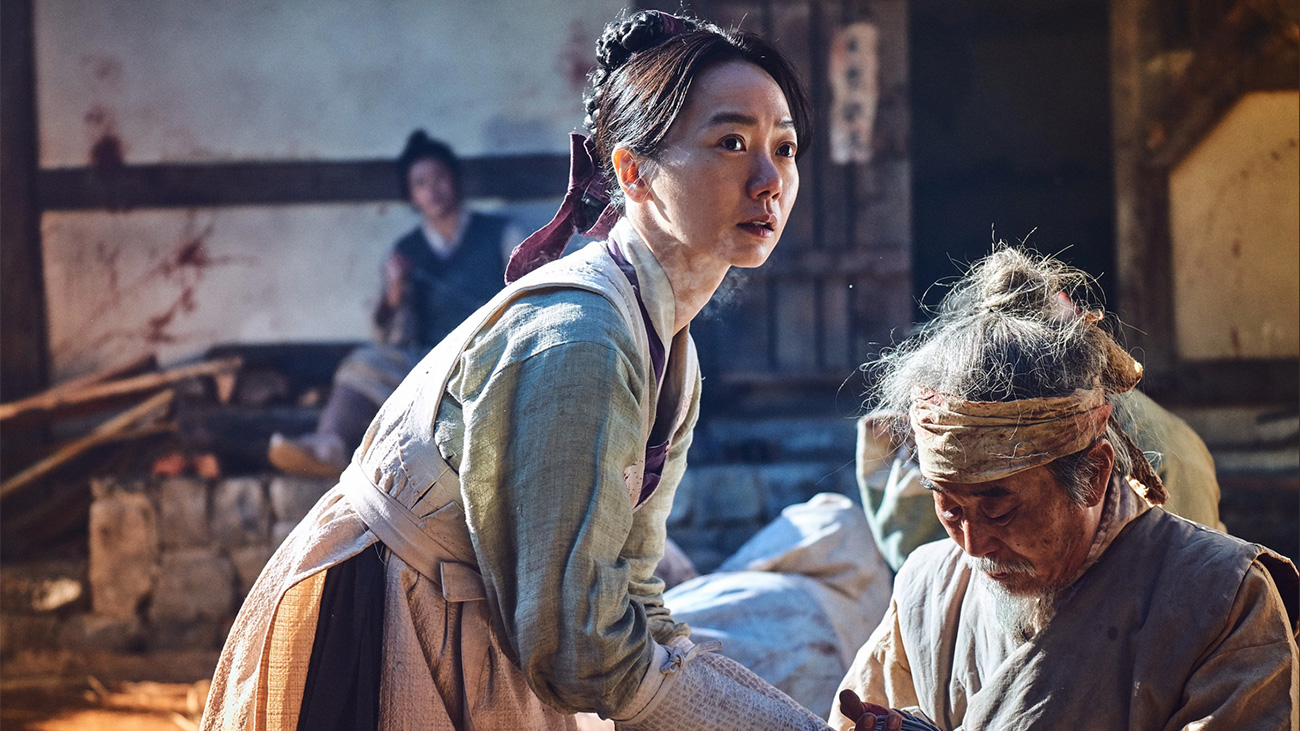 Performances are also uniformly good, which is to be expected when Kingdom was highly anticipated for its pedigree leading cast. Ryu Seung-ryong is not one of South Korea’s most respected actors for nothing. As the villain of the piece, there is a depth to his performance that asks the audience to keep questioning and understanding his intentions beyond just a greed for power. The writing for his character may not necessarily have that kind of complexity (as of now), but Ryu is certainly giving it all he’s got.

Joo Ji-hoon, who has recently experienced a new surge in his career after starring in the blockbuster hit series Along With the Gods, delivers a fine and complex performance as Crown Prince Lee Chang. He shows the Crown Prince as well-meaning but inexperienced, heroic yet burdened by his position. As the village healer Seo -bi, Bae Doona isn’t really given enough to do for an actress of her stature. She’s largely there to serve as exposition for the zombie lore, and she is reliably remarkable.

Other key performers include Kim Sung-kyu as the mysterious villager and hunter Yeong-shin, whose hinted past trauma will give more context to the crown’s treachery. Also, Kim Hye-jun holds her own against Ryu Seung-ryong as the Empress consort and daughter of Jo Hak-jo. For these supporting characters, hopefully the promise of a second season means that they will have more to do.

Although Kingdom’s short six-episode season may disappoint, particularly as its inaugural season only exists to set up what’s to come, a second season is already underway and will likely stream on Netflix the same time next year. Kingdom may not be the most groundbreaking piece of storytelling out there but it’s certainly worth checking out just based on its premise, high production values, sumptuous cinematography and gory zombie action. The series might have been a harder sell to a South Korean audience as a standard TV drama, but as a Netflix Original, Kingdom is the perfect entry point for Netflix to invite its international audience to discover and appreciate the nuances of modern South Korean horror and storytelling.