This article was created in partnership with Korean Film Festival in Australia (KOFFIA) to highlight the film, In Front of Your Face, directed by Hong Sang-Soo. The 2022 edition of the festival will be take place in various Australian cities from August 18 – September 11. For more information, visit the festival website.

“I just wanted to capture you on film.”

The cinematic output of South Korean auteur Hong Sang-Soo is unlike any other director, largely because few filmmakers make films the way Hong Sang-Soo does. Incredibly prolific, Hong has honed down a filmmaking method that is simple and fast: find actors and filming locations, write scenes on the days that you shoot them, use nearly everything you shoot, have the shoot and post-production process happen over mere weeks, and be your own director, screenwriter, editor and composer. Due to this lightning-fast method it’s not unusual for Hong to release several films in the one year.

This constant torrent of production has resulted in Hong often being accused of simply making the same film over and over again, and that such speed can only result in slight, surface cinema. Hong’s output, however, can’t be considered solely through each individual film standing alone. Hong has built himself a whole dang universe, with themes, narratives and character types constantly swirling through each film. Each film takes new routes and can be layered on top of each other to give new perspectives or reinforce and tell stories anew with each edition. The pleasure of experiencing Hong’s work grows the more of his films you have seen, but it does often seem intimidating to newcomers. Where to start?

Ironically often the most accessible entry points to Hong’s universe are those which stick out as a bit unusual within his wider landscape. In Front of Your Face, one of two new Hong entries in 2022 and screening at this year’s KOFFIA, seems like a straightforward story of an older woman returning home, with little of his usual narrative time-bending such as doubling back, splitting perspectives or repeating timeframes. He’s tricksy though, Hong – this narrative may largely unspool linearly but the emotional journey our heroine is undertaking sees her crashing again and again into spectres of her past. Hong’s casting of Lee Hye-Young as the film’s lead character Sang-Ok strengthens this sense of time collapsing in on itself – Lee, who was a popular star of Korean cinema in the 1980s and early 1990s, has rarely been seen on cinema screens since the 2000s, having largely continued her acting career on television drama series. 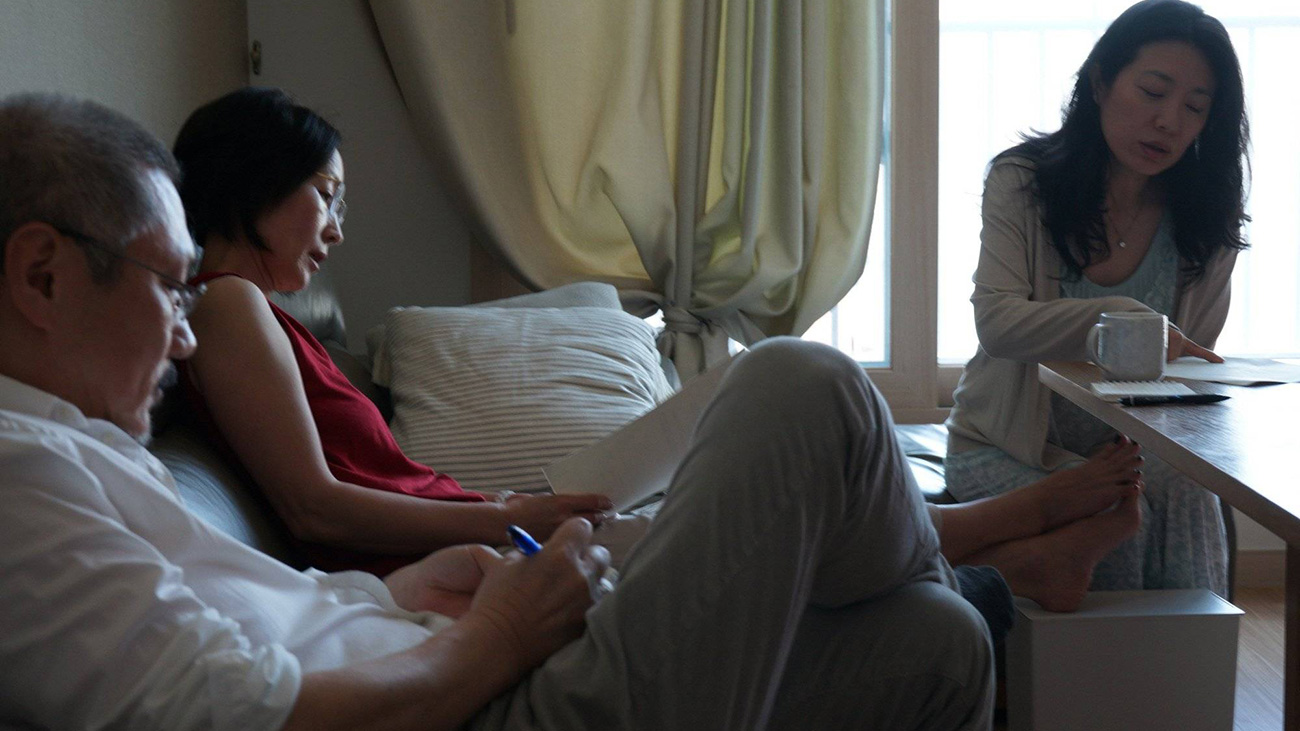 Director Hong’s (L) approach to filmmaking is fast yet extremely collaborative. It’s one of the reasons why he is able to produce several films in a calendar year.

In Front of Your Face opens with former actress Sang-Ok waking up on the couch in her sister’s high-rise apartment. Sang-Ok has been absent from South Korea for many years, and in interactions with her sister Jeong-Ok (Cho Yun-Hee) it becomes clear that neither woman is very familiar with the other. They gingerly circle each other in conversation, attempting to draw out facts big and small, while leaving much hanging in the air. Jeong-Ok is visibly shocked to learn that, far from the glamorous life she had assumed Sang-Ok was living in the US, her older sister has no savings and has been working in a menial service job.

Sang-Ok is eliding even bigger secrets from Jeong-Ok. As her younger sister chatters away formulating plans for Sang-Ok to move to an apartment nearby, the audience knows from witnessing private moments of Sang-Ok in pain and from her meditative voiceover which gently chants prayer-like thoughts, that her visit to Korea is likely to be her last one. Sang-Ok is experiencing a final return, to her family, to her past, to the cinema, through a commitment to living in the present and experiencing the “heaven” that is hiding in front of her face. 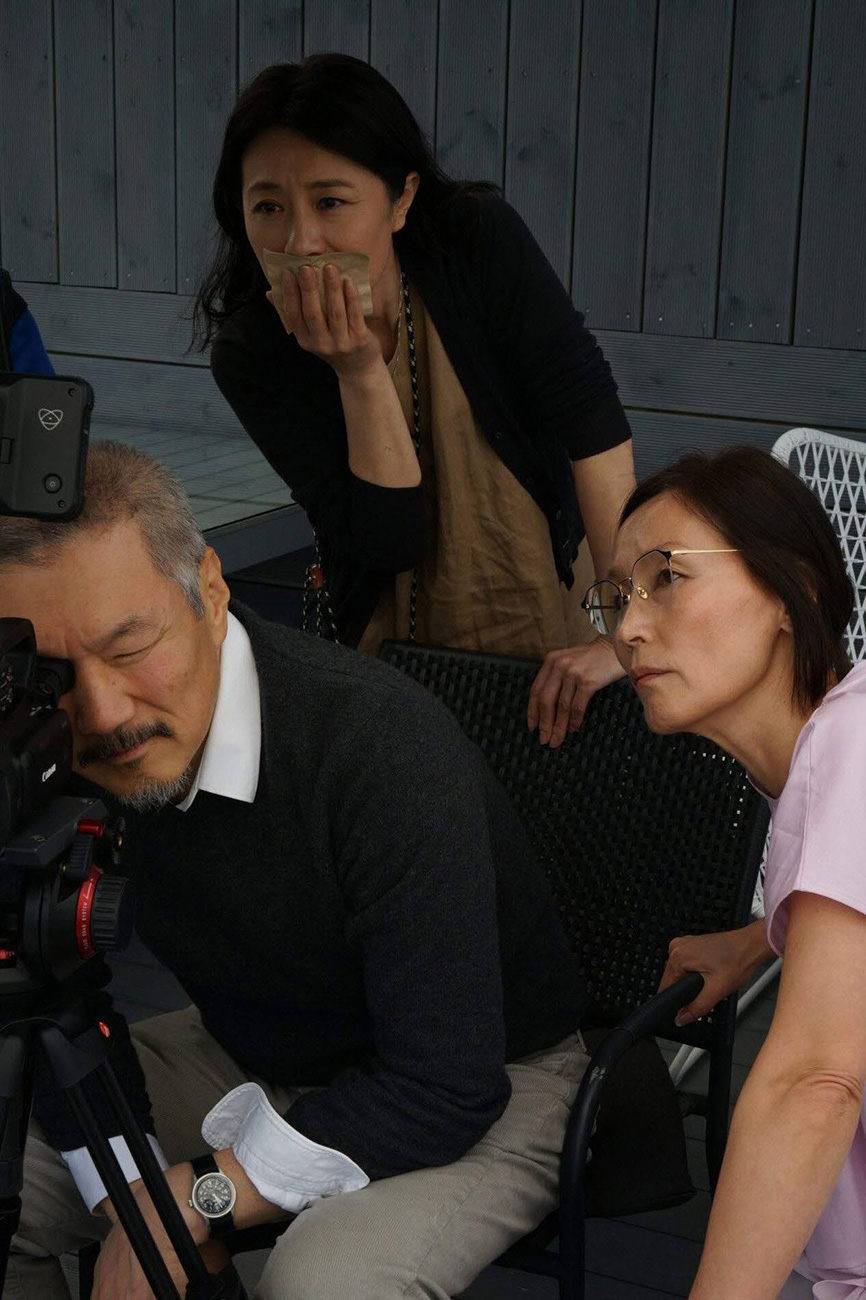 Director Hong’s (L) films are constantly evolving; each film grows from the other and, sometimes, they even talk freely with one another.

Hong’s consistent thematic focus is not just on the tricksiness of time and the failures of communication, but on the nature of making movies and the people who devote themselves to doing so. In the second half of In Front of Your Face,  Sang-Ok meet Song Jae-Won (Hong regular Kwon Hae-Hyo), a director who is nostalgic for Sang-Ok’s cinematic work in the 1990s and wants to have her star in his upcoming feature. Song sees this as a grand return to the screen for a beloved actress; for Sang-Ok it is something more loaded in the face of her new outlook on what it means to live.

Unlike other Hong films which tend to be full of characters struggling to say what they mean and being misunderstood or misconstrued by their fellows, Sang-Ok is the rare Hong protagonist who has what can be considered a strong, coherent philosophy brought on by the finality of her illness. Hong’s characters are more often than not flailing helplessly in their lives, unsure of making decisions, of what to do with their careers and romantic lives, and in confusion often just sit and drink soju about it. Sang-Ok, however, is unapologetically straightforward about how she has decided to live her few remaining days, contrasting starkly with Director Song, who is a much more familiar Hong character. Song is so overwhelmed in the face of Sang-Ok’s graceful explanation as to her new perspective on life that the audience can see his own outlook—one that’s beenbuilt up around his career and his ideas of cinema—crumble flimsily under the weight. Perhaps Hong’s small admission that cinema cannot always be an answer to what ails in life? Maybe!

Most Hong films viewed in isolation, with no knowledge of his greater oeuvre, cannot be a wholly satisfying experience, and anecdotally I have had many friends express to me frustration with Hong when they have seen only one or two of his films. But he is not a filmmaker to be clearly understood on the basis of one or two films alone. His films talk to each other, build upon each other, expand and contract. His cinema is a living organism that is constantly evolving.

To my mind, In Front of Your Face seems to talk most freely with recent Hong films Hotel By the River, in which an unwell father attempts to reconnect with his estranged children, and his other 2022 release The Novelist’s Film, which is focused on what it means to be a late-career artist. Hong’s latter day films are increasingly concerned with what it means to live, as an artist and as a human. What is satisfying? What brings meaning? And the answer to these questions seems to come back to simplicity. Commit to nothing that is uncertain. Nostalgia is only to be indulged in small doses and doesn’t result in anything satisfying. Small everyday occurrences are able to carry with them enormous emotional experiences. Find joy and people you love to spend time with. Enjoy the day.

In Front of Your Face is a gentle but no less powerful entryway into Hong’s universe. Just promise me that if this is your first, you won’t stop at one!