This review contains spoilers for The Witness.

Should you report a crime if it meant endangering your life and that of your loved ones? This is the central question that drives The Witness, a new film from director Jo Kyoo-jung that adds to South Korea’s already expansive collection of crime-thrillers. And while The Witness doesn’t exactly break new ground in the genre — which itself is a difficult feat for any new film when one considers the country’s quality output for suspenseful thrillers — it does provide some socially conscious commentary, posing interesting questions to its audience on, of all subjects, property value.

When salaryman Sang-hoon (Lee Sung-min) comes home after a night of drinking, he witnesses from the balcony of his home a brutal murder. Stunned by what he sees, he is suddenly surprised when his wife (Jin Kyung) turns on the light to their apartment, alerting the murderer (Kwak Si-yang). In a panic, Sang-hoon shuts the light but it’s too late – the killer knows which building and which apartment the light belonged to. For the remainder of the film, Sang-hoon is tormented by the killer and becomes increasingly paranoid that he is the next to go. 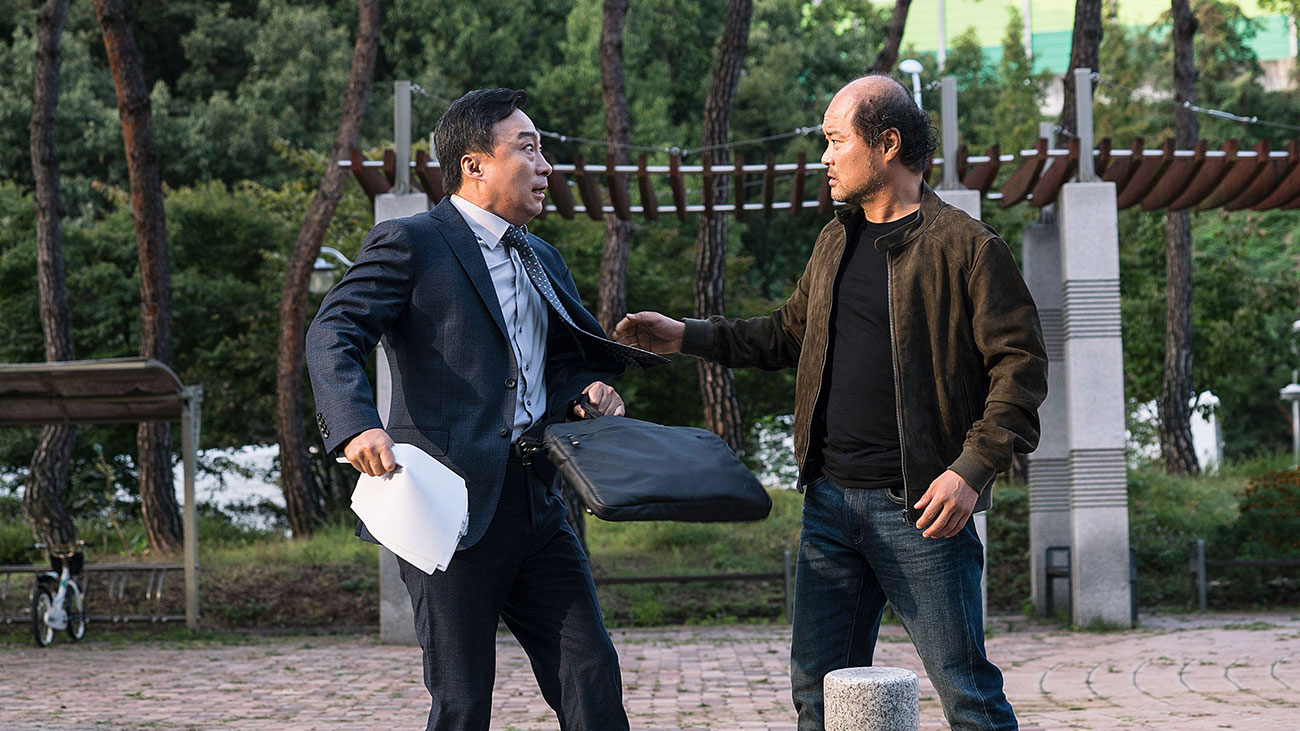 Arguably the film’s greatest source of disappointment is with its characters. Although Sang-hoon undergoes a transformative arc that forces him into taking more direct action, the character’s cowardliness for a majority of the film remains a frustrating sticking point as a viewer — especially when he is paralysed by fear and unable to communicate with detective Jae-yeop (Kim Sang-ho). Just as frustrating is the lack of characterisation for the killer, who could have been played by literally anyone. That the character is simply a mysterious force of evil that spontaneously shows up in the neighborhood and freely menaces Sang-hoon and those around him in broad daylight without any repercussion is also of massive concern.

But perhaps that’s the point as community pressure and inaction is a key observation that The Witness makes in its overall commentary around crime in relation to property value. Following the discovery of the murdered woman, a form is distributed around Sang-hoon’s community which asks tenants to not aid in the ongoing investigation, unless they want the long-term property value to drop. When a woman in the building goes missing, her husband posts missing persons flyers of his wife around the neighborhood but is reprimanded by the community who ask that he not make such a public commotion about a serious issue. And the final shot of the film, where Sang-hoon stands in the same spot where the victim was murdered and calls for help, is especially haunting.

These observations do elevate the film’s quality somewhat and, were the film to lean more heavily on such issues, rather than opt for the kind of film it ended up becoming, perhaps The Witness would have become a much more stronger and socially conscious film. Yet while it does feel like it wants to elaborate a little more on the bystander effect, what we end up being given in The Witness is ultimately a final product that’s very ‘by-the-numbers’, as far as Korean thrillers go.