It’s like the ultimate dare: find the most haunted house and enter it under a cloak of darkness and then go to the epicenter of fright, yes ‘that room’, and then enter. We’ve all been there in some degree, probably as a teenager, and scared the living daylights out of each other. Well, Gonjiam: Haunted Asylum is just about that but they’re older and producing a livestream web series called Horror Times.

Gonjiam is an actual asylum in South Korea that was shut down in a cloud of controversy. It is said that the asylum’s director murdered 30 inmates and then hung herself. The building is said to be covering the graves of resistance fighters killed in the Japanese occupation so that they would remain hidden. It is also rumoured to be the site of barbaric scientific experimentation on its patients during the ’50s and ’60s. Lastly, search the CNN’s top 7 freakiest places in the world and you will find Gonjiam listed as one of the most notorious and most haunted place in South Korea.

In the film, it’s a gang of seven that take up the dare. Their gear is sophisticated and they’re hunting for one million views and the associated advertising revenue on their livestream. That and some cheap thrills and scares for the night — or so they think.

Gonjiam: Haunted Asylum is director Jung Bum-sik’s latest feature. Renowned for his film The Epitaph (2007) this is his first foray into the ‘found footage’ subgenre of horror. Don’t let that put you off though as Gonjiam is an excellent example of this type of film with good tension and plenty of frights and delights. 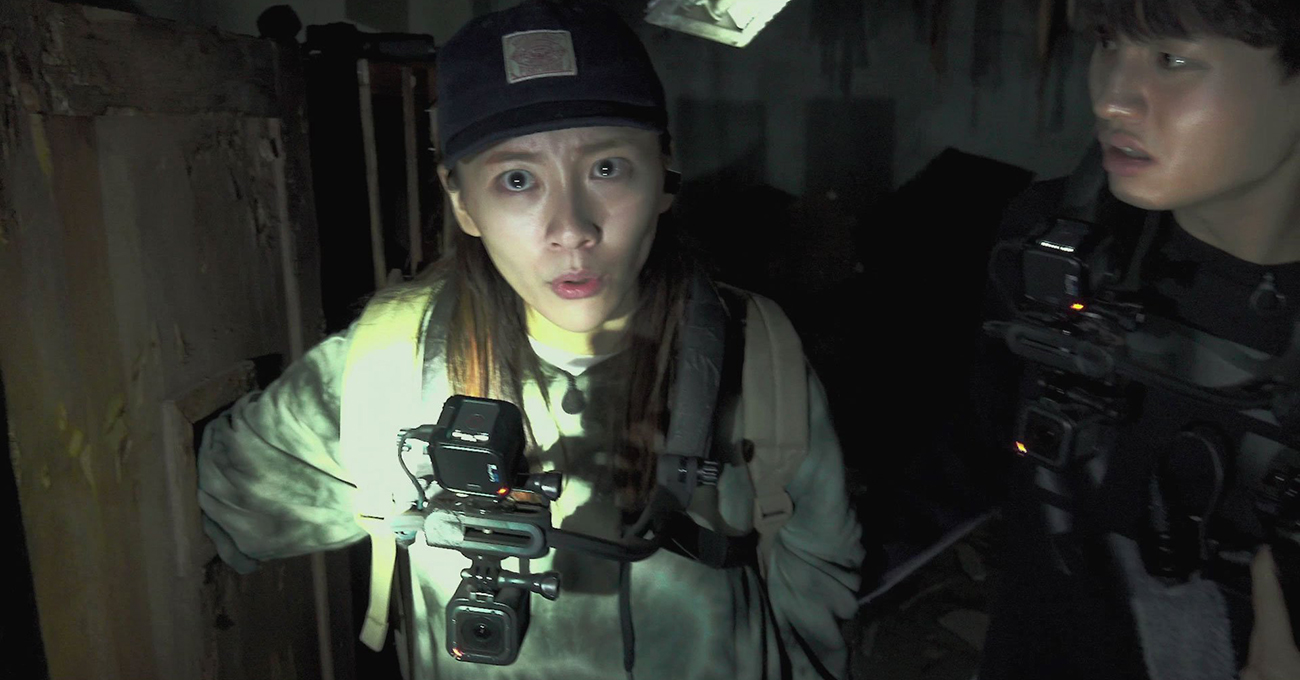 Filmmaker Adrian Tofei claims in his Found Footage Manifesto that a found footage film is technically a pseudo documentary film (and is certainly not a mockumentary, he points out). It “is a fictional film in which all or a substantial part of the picture is presented as being composed of recordings of real life events, seen through cameras that are part of the events. The cameras may be operated by one or more characters in the film or they may also record on their own (like surveillance cams)”.

Well, this is a modern version of found footage with the internet component and it’s like a behind-the-scenes of a live streaming event with the webcast footage inter-cut. The cast has recorded every shot and the results are quite startling with a claustrophobic aesthetic. Each member of the team has a neck cam, two cameras that simultaneously record a distorted head shot and their POV (point of view). Then there are a number of hand held cameras that are shared around and some locked-off cameras (surveillance) that have been set in the ‘hotspots’ of the asylum earlier that night. The result is an unsettling intercutting of overexposed, distorted close-ups and dark wider shots where you are drawn to the deep background with its obscured happenings.

Jung’s skillful blurring of fiction and reality is achieved by setting the film in the real, infamous location and using a cast of predominantly fresh, unknown faces who all use their real names. Coupled with the camera shots and the almost real time action, this all adds up to a very raw and immediate experience. In this sort of film, so much of its success hinders on the actors to create a real experience and despite their lack of screen credits the cast do a seamless job. All credit to them and the director for achieving what must be harder than in a traditional narrative film.

Apart from being a cracking fright night tale, Gonjiam: Haunted Asylum is jam-packed with Easter eggs for those with astute eyes and a good sense of Korean history. This is a trait of the director, to load his films with plenty of signs in the deep mise en scène. His famous film The Epitaph apparently still has undiscovered Easter eggs more than ten years later. 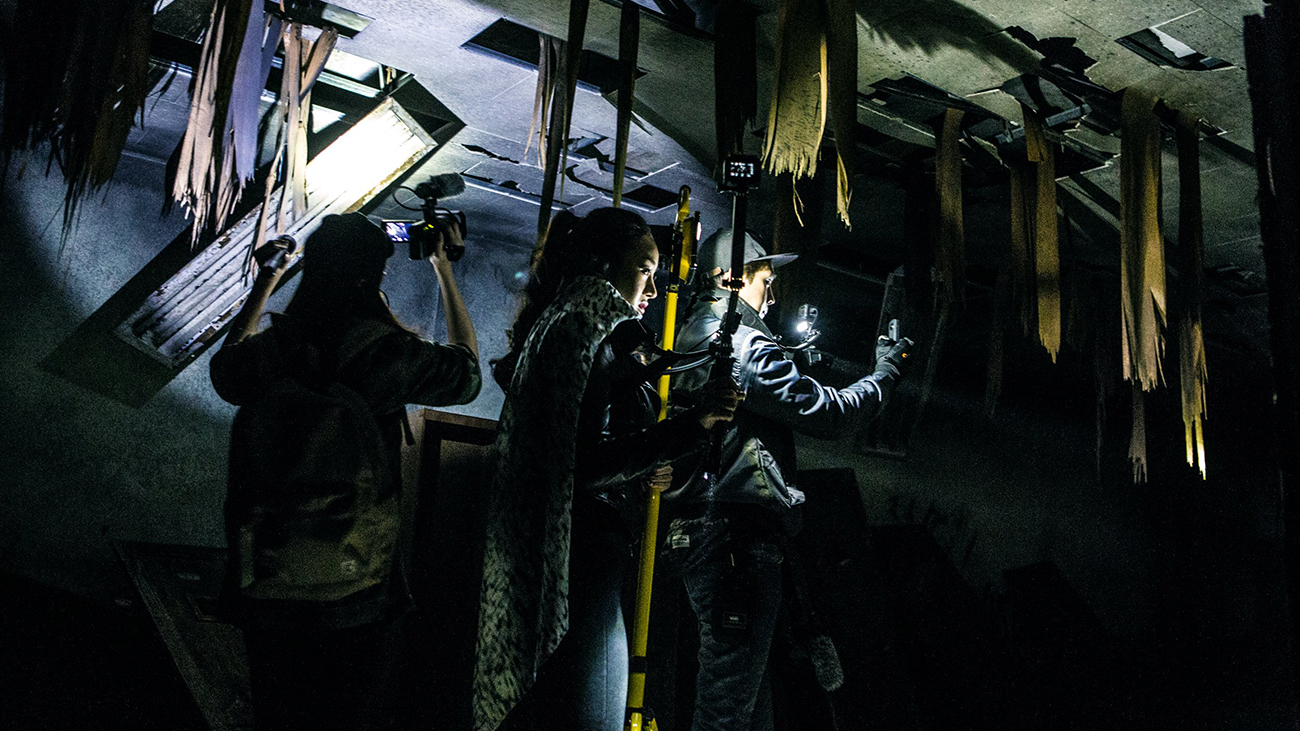 In Gonjiam: Haunted Asylum there are indicators that one of the group may indeed be more connected to the asylum then it appears on the surface. Look hard for the signs and you’ll see they are there. But the most intriguing hidden symbolism is the political commentary running throughout the film, particularly right to the very end. Recently impeached and imprisoned president Park Geun-hye and her father, Park Chung-hee the president/dictator from the ’60s and ’70s are both referenced within this film in various and sometimes subtle ways. The most obvious is the newsreel footage where they are awarding a medal to the director of Gonjiam but the references at times go a lot deeper.

In the background of one of the piece-to-camera shots, there is graffiti on the wall that says 304 Angels with a ribbon symbol. This is a direct reference to the Sewol Ferry disaster of 2014, one of Park Geun-hye’s darkest moments in her presidency, where she received major criticism for her lack of action and compassion. Jung also attempts to draw parallels with the director of the asylum, Park Ji-A, and South Korea’s impeached and subsequently jailed president, by purposely making them look similar and by also having the team in the film’s mysterious room 402 ankle-deep in water with even more water above them – perhaps similar to what it might be like in a sinking boat?

Other Easter eggs referencing Korean politics and historic events include:

All these Easter eggs aside however, Gonjiam: Haunted Asylum is an enjoyable though terrifying ride. And with all the different details hidden in the film, it really does make for a well-crafted horror.