Yoon Dan-bi’s Moving On feels like a memory; a snapshot of three generations of a family living under one roof during the summer. Sun peers in through the window as children idly hang around, siblings bicker and argue only to make up quickly, a daughter asks for money to get her eyes done, and a birthday is celebrated where a small child does a silly dance by sticking his arms into his pajamas. All of these moments are simple in scope carrying with it a deep sense of nostalgia, and yet Yoon Dan-bi mines every single frame for emotional impact and resonance. Instead of falling into many pratfalls that melodramatic family dramas can succumb to, Moving On is an exercise in naturalism; an honest film that bears its emotions plainly and matter of fact. It is a film that has the ability to go from funny to heartbreaking to heart-warming all within one scene, and this happens multiple times. The film feels like the work of a veteran years into their career, and yet it comes as a complete surprise to find out this is Yoon Dan-bi’s debut feature film. Equal parts coming-of-age story and family drama, Moving On is an impressive film, reaching far greater heights than its simple premise would lead one to believe.

Based in part on Director Yoon’s experiences with her own grandmother, the film begins with teenage Okju (Choi Jung-un) standing in the emptiness of her old home before her father Byunggi (Yang Heung-joo) and younger brother Dongju (Park Seung-jun) travel together to their new home. It’s a time of transition for Okju and Dongju, as their mother has left and forced the three of them to take residence with their grandfather (Kim Sang-dong), whom they are very inexperienced with. Before long, they’re joined by the fun Aunt Mijung (Park Hyun-young), and we begin to learn how each character deals with their respective problems, and what they choose to keep from one another. The simplicity of the narrative gives the illusion you’re in for a meandering slow moving bore, and yet the familial dynamics are the most engaging parts of the film.

Yoon Dan-bi’s gift for interconnecting these characters in the subtlest of ways has to be commended as it makes for a rewarding viewing experience when one notices the way certain scenes play out. There’s a brilliant moment where when Okju gives a boy she’s meeting (she never refers to him as boyfriend) sneakers; he doesn’t ask where she got them from, and she doesn’t say. Instead we’re left wondering for a brief period as the film moves away to focus on Byunggi playing a small prank on his son distracting us from the question, only for us to find out in the next scene that Byunggi sells the sneakers out of his van to support his family.

Take for instance Mijung who demonstrates a deep love for her family, but also harbors marital problems of her own. After a fight Mijung has with her husband, one that Okju is a witness to, one can’t help but notice that bottles and cans of alcohol appear frequently around her. When Byunggi confronts her about her marital problems she serves up the only explanation that works, “It was embarrassing.” In serving with the film’s interconnectedness, this line is then almost mirrored after Okju runs into trouble with the police attempting to sell sneakers. After explaining the nature of where the sneakers come from, she mutters “So embarrassing,” to her father, directly linking Okju to Mijung in the way they handle their problems. Or… take a scene where Grandpa sits listening to Chang Hyun Best’s “Regret” while Okju sits on the steps, out of view. “I think and think along the cosmos street/ heart aches missing you, yearning to go to you,” sings Chang as the pair grieve in their own way; for Okju, it’s her mother and for Grandpa, his wife who has long since died before the start of this movie. It’s a sequence that stands out as a highlight in a film filled with many highlights, allowing insight into a family that comes together without really knowing how to come together.

There’s never any grand revelation, no fancy editing or call backs to previous scenes so viewers get it, it just simply… happens, which is a huge strength of Moving On in allowing us to visually answer these questions without characters telling us directly. It never feels cagey, allowing each member of the family to breathe and simply exist without the necessary need for any of the drama to go over the top. It’s the way Moving On demonstrates how interconnected this family is, and how each member imparts a piece of them on to the other in one way or another. Moments like these quietly exist throughout the film, letting them widen our experience without forcing us into a feeling. It’s a tough line to balance and thankfully Moving On does gracefully, as one false step could send the film spinning into navel-gazing territory that is prone to haunt coming-of-age films (looking at you Submarine).

But Moving On is far smarter than, following in the footsteps of other great coming-of-age films like Peppermint Soda by Diane Kurys, and similar family dramas by Yasujiro Ozu with its largely unmoving camera, Naomi Kawase in its sincerity, and Hirokazu Kore-eda in the way actors work beautifully together. Yet in spite of that, Moving On never feels like a copy of a copy; Director Yoon’s method and graceful hand on familial drama feels unique by comparison to the aforementioned directors. The film is sentimental but not annoyingly so, sweet without being saccharine, and emotional without being manipulative – it just hits the right balance to make the most of every scene. A large part of that comes from Kim Gi-hyeon’s understated and nostalgic cinematography, each scene carrying with it a feeling of opening up a family photo-book. Despite taking place centrally in one location, it never feels claustrophobic as shots of wind billowing curtains, and balconies overlooking gardens give the sense of openness; as if free to exit and enter whenever one wishes. 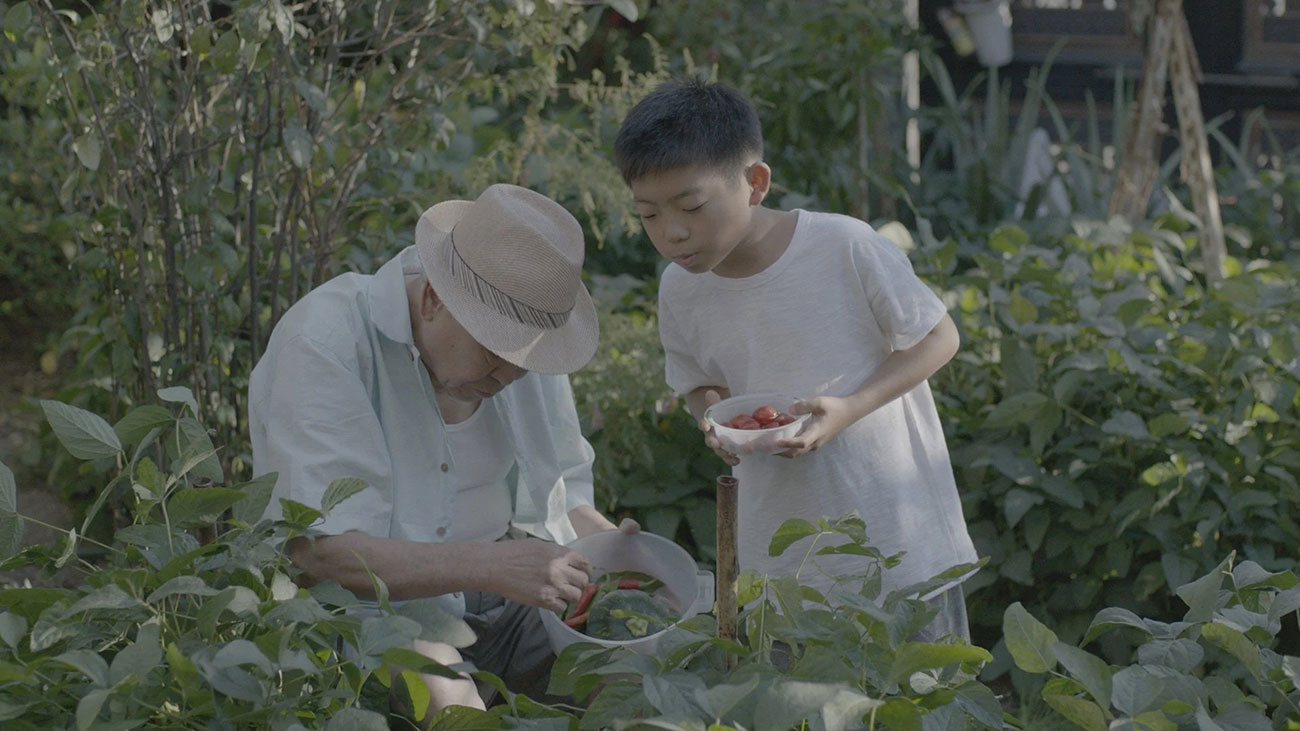 Choi Jung-un and Park Seung-jun make for great siblings, and were it not for this central pairing, the film probably wouldn’t work out nearly as well. They never feel as though they’re acting the part as siblings, but are in fact related by blood, siblings who bicker in equal measure, yet genuinely care for one another, each having their own feelings towards their current situation. While Dongju appears to be along for the ride, as being the younger sibling affords him the luxury of ignorance when it comes to inter-family drama, it’s Okju who carries much of the burden of knowledge with regards to everything going on around them without any understanding of how to express this sorrow and pain she’s feeling. Where Dongju hasn’t picked a side when it comes to their parent’s separation, Okju very clearly resents her mother, going so far as to reject gifts from her and demanding her brother not see her. But where Okju is weighted down by these things, Dongju moves effortlessly, providing the film with great moments of levity. Like all great little brothers, he may not be involved in the drama, but he is still necessary to the cohesiveness of the family. Without him, there’s a possibility that the film would lose its buoyancy.

Yoon Dan-bi goes to great lengths to separate the two of them not only by age, but by their temperament and respective understanding of the situation. This is to say, they’re great actors, and even the most hardened of individuals who swear they hate child actors can’t help but smile once Dongju slips his arms into his pajamas and starts dancing for his family. These feelings can’t be manufactured, they just happen, and with the power to conjure up feelings like that and make it appear so effortless that one has to commend Choi Jung-un and Park Seung-jun. From Choi Jung-un’s quiet demeanor holding in so much to the point of breaking, to Park Seung-jun’s excellent childish energy just wanting a good time, they carry the film and their dynamic is deeply appreciated.

A special mention has to go to Kim Sang-dong whose presence throughout the film is deeply felt, even if he never speaks above a whisper. Quiet, mostly silent, and tending to his own garden, he moves in and out of scenes without having much of any dialogue. This makes moments when he does speak all the more impactful, like when he breaks up a fight between Okju and Dongju. Instead of asking what’s happened, or why, he simply places a hand on Okju and gently says, “Come on, get back in your room,” before guiding a crying Dongju down the stairs, hand in hand. This scene, this moment, ruined me emotionally, my face slick with tears, my heart growing two sizes too big that day. Had this scene been handled by another director, they probably would have punched up the emotions to their extreme, music swelling to indicate drama, and some kind of speech about family, yet here the opposite happens and we’re treated by a genuinely touching and sweet moment of family resolve by a character we rarely hear from. 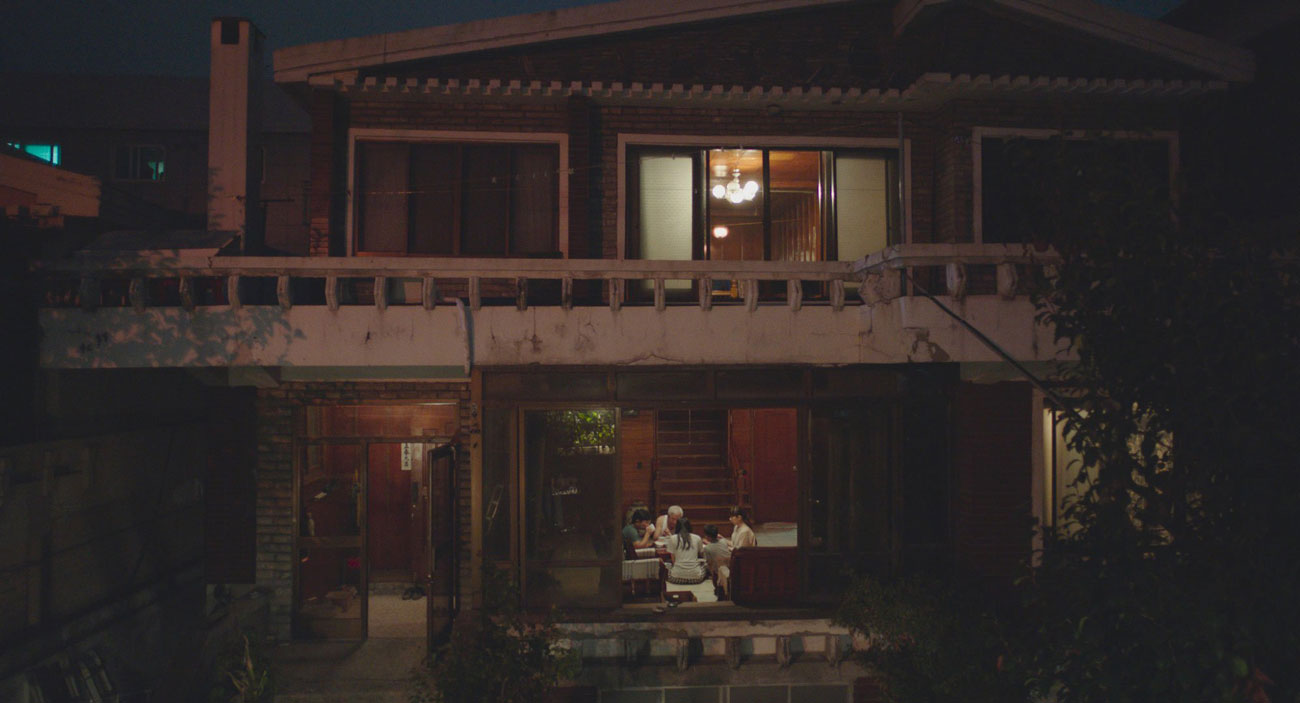 But where Kim Sang-dong may be the secret weapon of Moving On, it leads me to probably my biggest fault with the film, and that’s in the way it treats this character. It’s not that the character is bad because he’s not. It’s just that it might be the one cliche that can be leveraged at the film; the comparison to Ozu becoming more a bit on the nose in this regard. This isn’t a problem inherently, as the film isn’t attempting to surprise in that way, it just feels a bit trite. It’s an easily forgiven criticism, purely because Kim Sang-dong is great, his performance mirroring that of the late great Kirin Kiki’s performance in, to be honest, any number of Hirokazu Kore-eda’s films but in particular Shoplifters. It’s just a bit unfortunate that the one of the few stumbles this film comes across is a matter of it being cliche. But seeing Kim Sang-dong smiling and waving while watering his plants is a blessed image. Makes me miss my grandfather that’s for damn sure.

To be perfectly honest, Moving On might be my favourite film I’ve seen so far this year. From Kim Gi-hyeon’s picturesque cinematography to the A-level acting from everyone on screen to Director Yoon’s deft hand at making a personal story relatable and deeply resonant, the film excels on every level. It may not have the same level of flash as some other films in the genre but Yoon understands her strengths as a filmmaker and opts for a lighter approach: simple is more, and the most heart rending moments come from scenes where the dialogue never registers higher than a whisper. It takes a lot to make a family appear believable; to hit those notes of a family from bickering to genuine concern, and Moving On is in a class all its own.