In 2017, the #MeToo movement was in full swing. Women shared stories of the harassment, abuse, and misogyny they had experienced throughout their lives on social media and in major publications. It was at this moment the novel Kim Ji-young, Born 1982 became a sleeper hit in South Korea. Quickly, it received a film adaptation with well-known actors Jung Yu-mi and Gong Yoo taking the lead roles and Kim Do-young making her directorial debut.

Written by a former TV scriptwriter, Cho Nam-joo’s book received endorsements from leading politicians and K-pop idols, leading to an increase in sales. It also received plenty of criticism due to its ‘feminist’ label, a term still that’s incendiary in South Korea, and belief that the men in the book were unfairly characterised. Regardless, the book became the first in a decade to sell over a million copies in the country. Following the adaptation’s announcement, the film’s stars were flooded with hate comments online and the film received low ratings on web portals. However, upon its release in 2019, it topped the box office –– in a year notably filled with major scandals around the mistreatment of women by powerful men in South Korea.

With all this hype and controversy, you might imagine the book and film are filled with bombastic content. Instead, its story is quite ordinary and therein lies the point. Kim Ji-young, Born 1982 follows the life of everywoman Kim Ji-young (Jung Yu-mi) from childhood to motherhood, highlighting the sexism that has dogged her every step of the way: perverts who stand outside her school, men who follow her home, and spy cams installed in her workplace’s bathroom. Shortly after the birth of her first child, which prompted her to quit her marketing job, Ji-young experiences dissociative episodes. As if possessed, she behaves like other women she knows, such as her mother, and then has no memory of doing so. 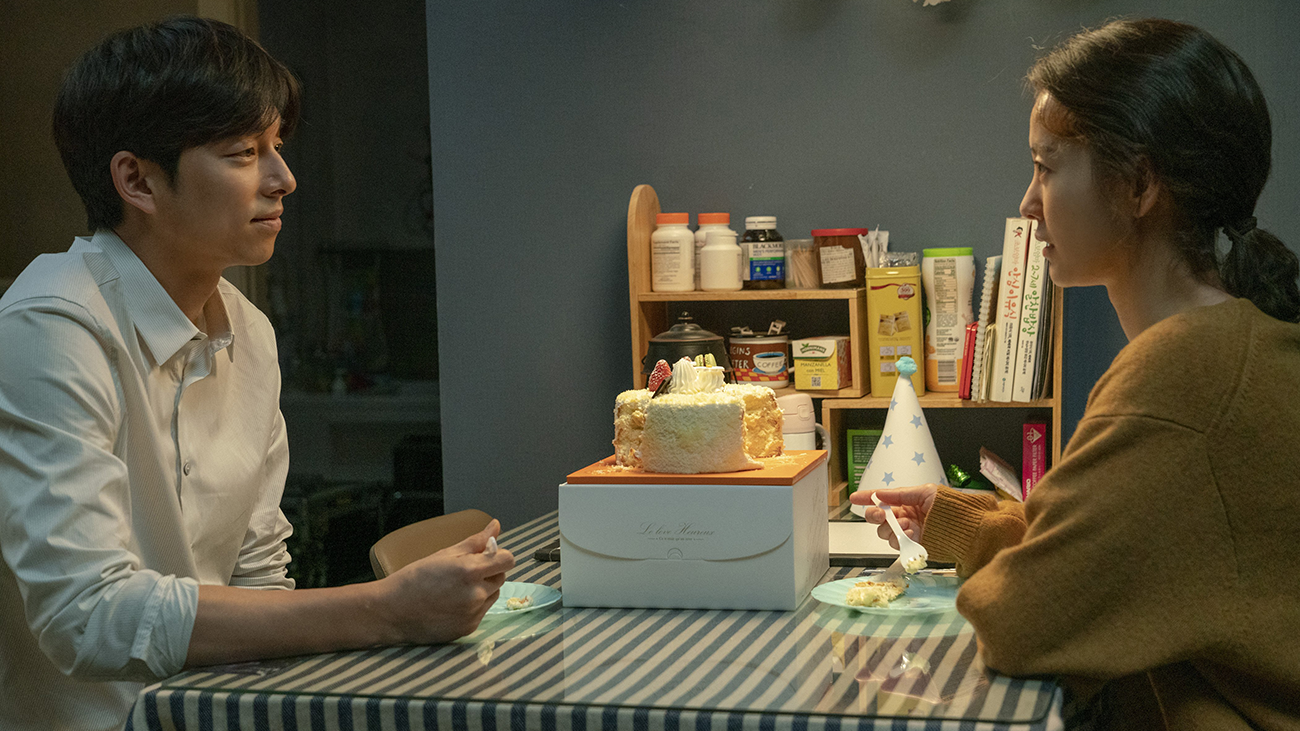 The book is written in a clinical and linear manner as it takes us through Ji-young’s life, and is even filled with statistical data. At the novel’s end, we discover the narrator is Ji-young’s psychiatrist. The film takes a different approach, focusing on Ji-young and her husband, Dae-hyun (Gong Yoo) in the present with occasional flashbacks to Ji-young’s experiences growing up. This is the third film Jung Yu-mi and Gong Yoo have made together (both previously starred in Train to Busan and Silenced), and their comfort with each other makes them a believable married couple. They each admirably depict their ordinary characters without any indication of their off-screen celebrity. And yet, it is the appearance of megastar Gong Yoo that is the first red flag to suggest this story will not just belong to the character Kim Ji-young.

Ultimately, Kim Ji-young, Born 1982 is a sanitised and safe adaptation that does a massive disservice to its titular character. It makes two major errors; it reframes Ji-young’s struggles as a joint, marital issue rather than her own internal conflict and gives men more space in her story, as well as redemptive opportunities.

The book’s loudest critics slammed it for misandry, perhaps due to multiple scenes where Ji-young is harassed by men. Even the psychiatrist (a man) who has heard her entire story maintains a misogynistic attitude right up to the book’s closing words. In the film, these harassment scenes are erased or diminished. In the meantime, Dae-hyun is brought to the forefront as a modern man who is trying his best to help his wife, and so her challenges become his challenges. When Ji-young tries to find a way back to her career, it is shown alongside Dae-hyun’s anxiety over taking paternity leave and stalling his own career trajectory. The film also shows Ji-young’s father and brother attempt to make amends for past mistakes and Ji-young’s psychiatrist is recast as a woman. Then there are stranger choices; when a newly formed “elite” team at Ji-young’s workplace is made up of only men, the decision is due to the belief men are better long-term investments, whereas women’s careers are likely to get derailed by family matters. In the book, this decision is made by the man who heads up the company; in the film, it is made by the woman running the team.

An important aspect of Ji-young’s character is her passivity and inability to speak up, and how the women that take over her body do it for her. In the film, she is given a scene where she snaps back at a stranger who refers to her as a mom-chung (translated in English as “mom-worm”), a derogatory term used against stay-at-home mothers. But, infuriatingly, she does not call out the sexism of this remark but rather that he judged her without knowing her. Even when the film gives Ji-young a moment to stand up for herself, she doesn’t stand up for her humanity as a woman.

It is hard not to conclude that the filmmakers revised major elements from the book to temper the fiery attitudes of anti-feminists. And it is a shame to try to placate these people, who were determined to hate the film without ever seeing it. While the book did present challenges for an adaptation, the film did not rise to meet these challenges effectively even with the changes it made. The adaptation is difficult to follow, cutting through various vignettes with too many minor characters involved. This is made even more complicated when it flashes back in time to ill-defined moments in Ji-young’s life. Voiceover narration or title cards indicating the date could have eased any confusion but were missing. 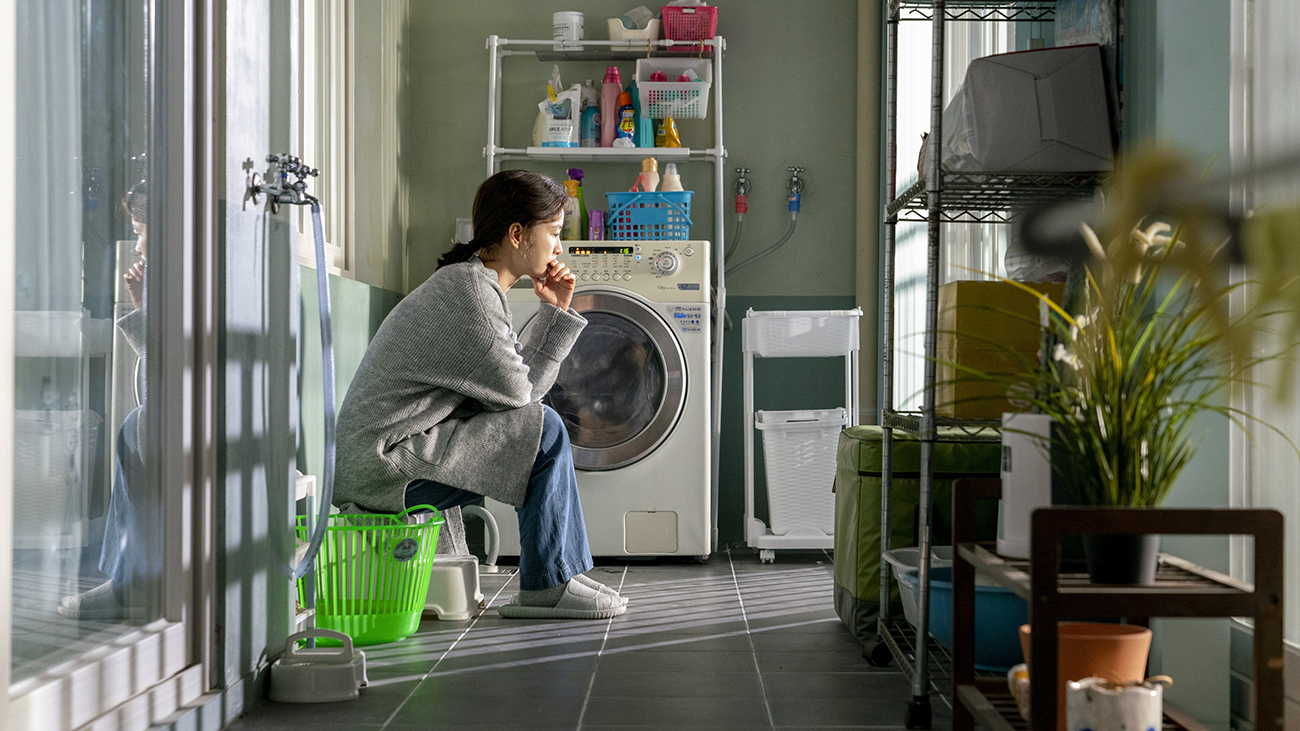 The film does successfully create a feeling of miasma during several scenes where Ji-young is isolated in her apartment, carrying out mundane domestic tasks. These scenes recall moments from Chantal Akerman’s 1975 film Jeanne Dielman, 23, quai du Commerce, 1080 Bruxelles. However, they do not last long, which undercuts their impact. Jeanne Dielman… famously stays with its character through the boredom and repetition of her life as a housewife. Kim Ji-young, Born 1982 lacks the courage to force the audience to be just as bored as Ji-young is, and does this continuously throughout the film. Even at a runtime of two hours, the film rushes through its scenes. We never stay long enough with Ji-young to feel her despair or sink into the quiet, lonely moments of life and discover the meaning within them.

By the book’s end, Ji-young’s dissociative episodes have diminished after starting therapy but not disappeared. Unable to definitively diagnose her, the doctor prescribes antidepressants and sleeping pills. It feels like her story will go on, off the page, much as it did before. The film takes a more saccharine approach; Ji-young gets the big scene where she stands up for herself and she returns to her first career aspiration of being a writer while her husband seemingly cares for their daughter. The hopeful ending feels insincere and unearned. Throughout the film, Ji-young toiled over how to care for her daughter, contribute to the household income, revive her career and receive (expensive) counselling for her condition. The film ends with her smiling like she doesn’t have a care in the world without explaining how any of this was resolved.

The book, based on the author’s own experiences, became a sensation because it voiced the injustices many South Korean women face and showed how persistent prejudice can break a person. While there is a story that could be told about the challenges young South Korean couples encounter when raising a family, this was not meant to be that story. First and foremost, it was meant to be about Kim Ji-young and her personal pain. Not her husband’s. Yet, the film sought to balance the concerns of both men and women, husband and wife. While patriarchy does ultimately hurt all of us, let’s not try to compare that hurt and consider them equal. The film undercuts Kim Ji-young’s role in her own story and that is one last injustice.