The work of Singaporean producer-turned-director Tan Bee Thiam signals a quest to understand the essence of authentic positivity. He first stepped behind the camera in 2015 with co-director Lei Yuan Bin to adapt the play Fundamentally Happy to the big screen. While that film tackles heavy topics surrounding abuse with appropriate gravity, his sophomore feature and solo directorial debut Tiong Bahru Social Club swings the pendulum to a full satirical comedy. Tan is in full control this time, telling the story of Ah Bee (Thomas Pang), a 30-year-old mama’s boy who has just been employed as a Happiness Agent at the titular establishment, a job which involves leading group workshops and taking care of the cynical Ms. Wee (Jalyn Han). The club employs a complex algorithm that quantifies the joy of the staff and senior residents and determines everything in their lives from activities to sexual partners. Those who fail to adequately contribute to the Gross Community Happiness Index are fired. Ah Bee feels like the perfect fit going in, but he quickly finds himself questioning if he is truly happy.

The film opens with Ah Bee’s mother Mui (Goh Guat Kian) exercising in a park with a sword. As whimsical music and credits play, several thieves wearing speedos and facemasks run past her with stolen art and are nearly decapitated by the aloof woman’s blissful swinging. The moment provides the first of the film’s many chuckles but ultimately does not amount to much in the grand scheme of things. The same applies to Tiong Bahru Social Club’s plot as a whole, which always feels like it is dancing around making larger points on artificial happiness and the unquantifiable reality of our emotions, but it never quite hits its points home. Tan’s film is rather light on narrative, at times playing out like a series of skits where everyone smiles except Ah Bee as they do something strange.

Thomas Pang’s character is the heart of the story, but he is written to be very passive and untalkative, mostly relegated to silently reacting to his bizarre workplace. Regardless, Pang still manages to play him with adorable sincerity and makes the most of the role as it is written. Ah Bee indeed undergoes a character arc throughout the film, but he also functions as a vessel for an audience alienated by overjoyed people of whom we cannot help but doubt their sincerity. The viewer may even darkly wish for their fake smiles to slip and reveal the chasm of emptiness underneath. Those masks do slip, but only for fleeting moments that feel afraid to disrupt the flow of jokes. Tiong Bahru Social Club is more interested in making the viewer laugh than cry, but it does not reach the comedy/tragedy balance of the best satirical dramas. 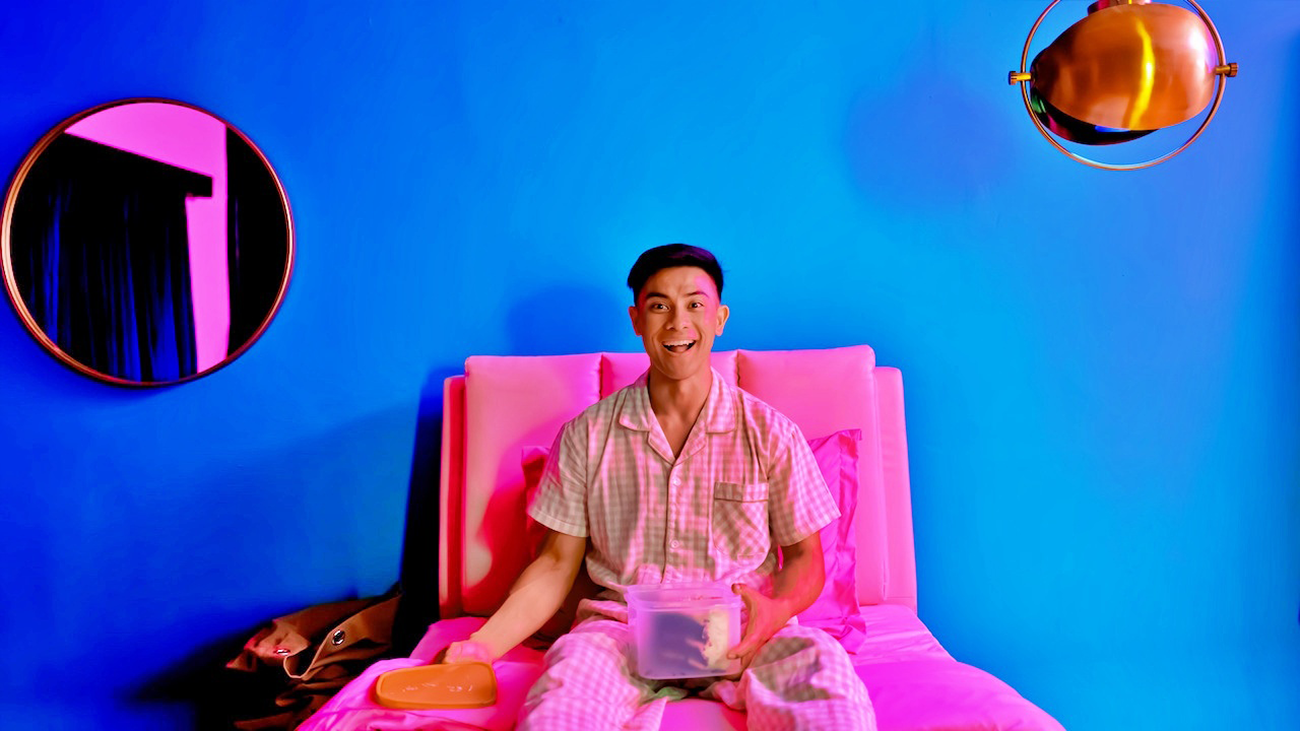 With his intentions of a loose, good time laid bare, Tan is commendable for his ability to make us laugh. He directs the film with palpable energy, teeming with a diverse swath of physical and verbal gags to keep it bubbling. These range from Ah Bee’s one-sided conversations with his virtual assistant BRAVO60 (Joe Augustin) to a cartoon Kama Sutra. There is an admirable feeling of creative freedom to the entire endeavor, particularly when Tan is willing to momentarily depart from the reality of the film for both occasional jokes and some softer moments, such as when both Ah Bee and his mother are positioned on the same bed together staring forward as they talk on the phone with each other. These are among Tiong Bahru Social Club’s most memorable bits—unpredictable and fully utilising the potential of its artistic medium in a way that not enough comedies do nowadays. Every scene is made all the more captivating by the Tan’s gorgeous visuals and colour palette. The craftsmanship on display by cinematographer/editor Looi Wan Ping and production designer James Page is especially of note; their handiwork pops with delightful hues and builds a cohesive, near-futuristic aesthetic that manages to feel both soothing and electrifying. Each frame conveys the fun the cast and crew must have had putting the film together.

It is impossible to watch Tiong Bahru Social Club without a plethora of other filmmakers popping into one’s head. Across several interviews, Tan has specifically identified Wes Anderson, Yasujirō Ozu, Jacques Tati, and Yoji Yamada as direct influences on the film. He appears to have been chiefly inspired by The Grand Budapest Hotel’s two-dimensional architectural extravagance and Good Morning’s warm colors and calm framing. Tan peppers in explicit references to some of the directors, such as shooting one early conversation between Ah Bee and his mother head-on as Ozu famously would. Many comparisons have also been noted between his film and Black Mirror, but more than anything else, Tiong Bahru Social Club feels like the bright and smiley alter ego of Yorgos Lanthimos’ The Lobster, especially when the film focuses on Ah Bee’s AI-paired relationship and regulated lovemaking with fellow Happiness Agent Geok (Jo Tan). It is unfortunate that Tan was unable to distance himself further from his influences in order to carve out a more personal style, but the film’s visuals are a promising indicator that he will soon achieve a voice uniquely his own.

Tiong Bahru Social Club is like a brightly coloured piece of candy—enjoyable and full of fleeting flavour, but missing some core components of a balanced meal. Tan Bee Thiam’s pastiche of heavily-influenced imagery deserved a more fleshed-out script to really hone in on the relevant philosophical ideas it tries to juggle. While it may appear to have more to say than it actually does, the quick 88-minute comedy does no harm and will brighten the viewer’s day with their expectations in check. As Singapore’s sole entry into NYAFF’s 2021 lineup, Tiong Bahru Social Club is an enjoyable journey worth supporting.