This island is carved into my heart.”

Minami-Daito is an island off Okinawa that is tiny and thrives on sugarcane farming. There is no high school on the island, so when the teenagers of Minami-Daito turn 15, they leave their families to continue their studies in Okinawa. Yasuhiro Yoshida’s Leaving on the 15th Spring is a slice-of-life and coming-of-age film that peers into the final year of Yuna’s (Ayaka Miyoshi) life on Minami-Daito.

Slice-of-life dramas are a distinct genre in Japanese cinema and they are not for everyone. There is no climax or big revelation. It may seem like nothing much happens through these films, but when done well, it can reveal a lot about a family or small community. For Leaving on the 15th Spring, it can track the emotional growth and coming-of-age of a young girl and her dysfunctional family. 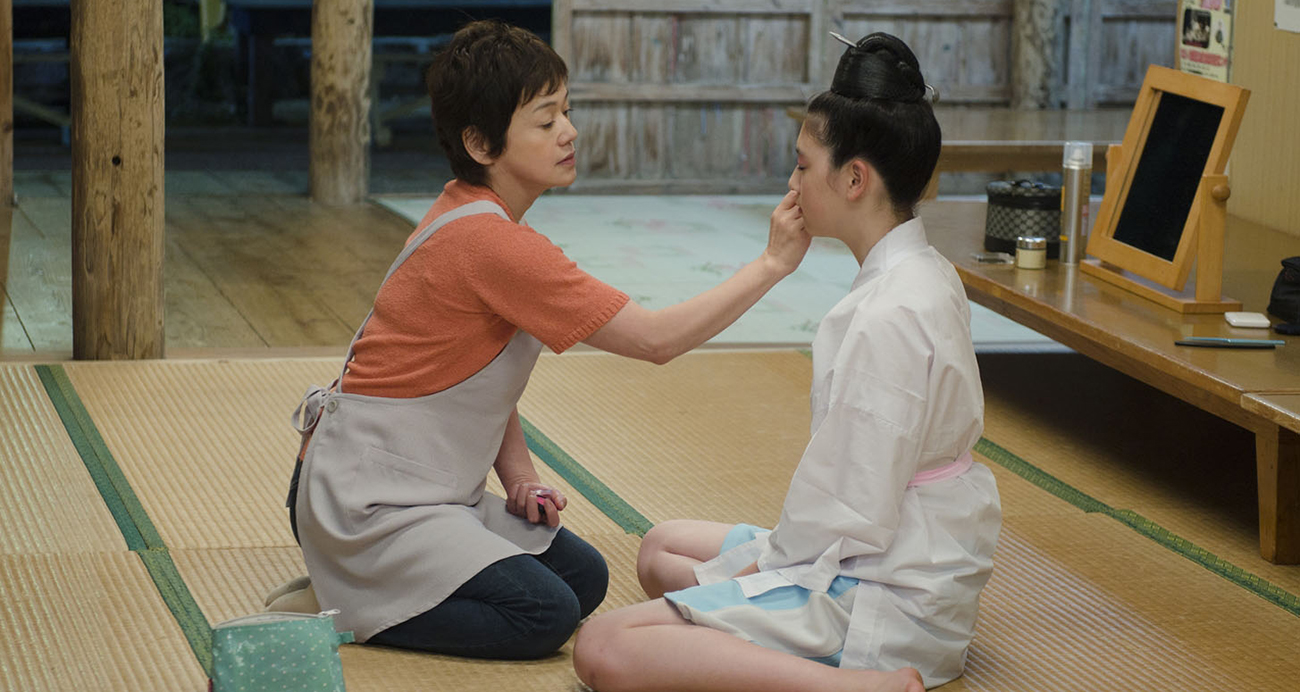 Yuna was born on Minami-Daito, and has lived there her whole life. Her older brother and sister have long left the island to study, live and work in Okinawa and their mother is seemingly there to ‘take care’ of them even though they are both grown-ups. Yuna therefore spends her days running the household while her father works on the sugarcane farms, at school, or practicing the shamisen with her school’s traditional all-girls’ music group, Bojinro Girls. The film opens with the previous leader turning 15 and handing the reins as leader of Bojinro Girls‘ over to Yuna. It is a symbolic gesture of the responsibility Yuna must undertake now as a young person of the world. For girls, the years between 14 and 16 are the hardest ones, and for Yuna, it will be by far her most tumultuous year as she learns some difficult lessons about life and relationships.

The choice to make Leaving on the 15th Spring a coming-of-age story about a young girl and crafting that story around how she slowly opens her eyes to see how fragile relationships and people can be really appealed to me. From learning to make decisions by herself to Yuna’s discovery of her own independence, it’s these story choices and more that are surprisingly, and unfortunately, rarely explored themes in coming-of-age cinema – particularly those focused on female protagonists which almost always focus on romance. This story is about Yuna and the people that really matter in her life are her family and her community. She loves her parents dearly, but their separation complicates things. Is there a side she should be on? Ultimately though, family is everything to her as we see Yuna struggle to keep everyone together, before the film delicately suggests to us – and Yuna – that we cannot always get everything we want in life.

Ayaka Miyoshi does a lovely job in the film. The mixture of Miyoshi’s doe-eyed charm with Yuna’s seriousness is highly effective and makes for a likable and relatable teenage protagonist. She is cautious and serious, but also vulnerable, innocent and charming. There is no affected self-awareness in Ayaka’s performance that tends to be the case with most teenage performers. It is an utterly fresh and simple performance.

The emotional journey that Yuna and her family take in the film is handled with such grace and restraint and feels very much realistic. When the film is done, it would seem like nothing much has happened over that last year of Yuna’s life on Minami-Daito, but at the same time, a lot has. And that’s the beauty of the direction and a testament to the strength of Yoshida’s writing and skill as a director.

On a personal note, through the last act of the film, where Yuna gets ready to perform “Abaiyo (Goodbye)” with her music troupe for the community, family and friends – as is tradition for all the departing and graduating leaders of Bojinro Girls – I found tears silently rolling down my face until the film ended. Simple gestures like the mixture of fear and trepidation on the new leader’s face as Yuna passes the torch to her, a touch of hands between mother and daughter, can be far more affecting than any dialogue that could have been written for it.

There are few things to quibble with in this film. I would probably shave off perhaps about 15 minutes of the runtime by excising the romance subplot Yuna has with a neighboring island boy to tighten the film up but on the whole, Leaving on the 15th Spring is a simple, well-executed slice-of-life and coming-of-age drama that is a far better film than much showier titles in the same genre (Boyhood comes to mind). Sometimes all a director really needs is to create characters we recognize, care about, grow with and love for a film to be effective.

Leaving on the 15th Spring will be screening at the 2014 Japanese Film Festival.