Teenage Girlhood in Asia: Our Huff and Puff Journey & What’s in the Darkness

The world of the teenage girl is often misunderstood and dismissed as frivolous and vapid when it can be a mining ground for complex themes like female sexuality and internalised misogyny.

At this year’s Melbourne International Film Festival Next Gen program, there were two films that explored the inner lives of the teenage girl in Asia: Daigo Matsui‘s Our Huff and Puff Journey and Wang Yi Chun‘s What’s in the Darkness (both of which we reviewed).

On the surface, it may seem like these two could not be more different films — Our Huff and Puff Journey follows four teenage girls in Japan who embark on a road trip to Tokyo to see their favourite band in the era of social media, while What’s in the Darkness is set in a sleepy town in Northern China during the early ‘90s and follows a middle school girl undergoing her first stages of puberty against the backdrop of a grisly series of murders.

But its teen-aged Asian protagonists bring these stories together, as the world of the teenage girl is entirely its own — a secret world where girls have unspoken understandings among one another, and that world allows for a unique perspective in both those settings.

Why pop music matters to the teenage girl 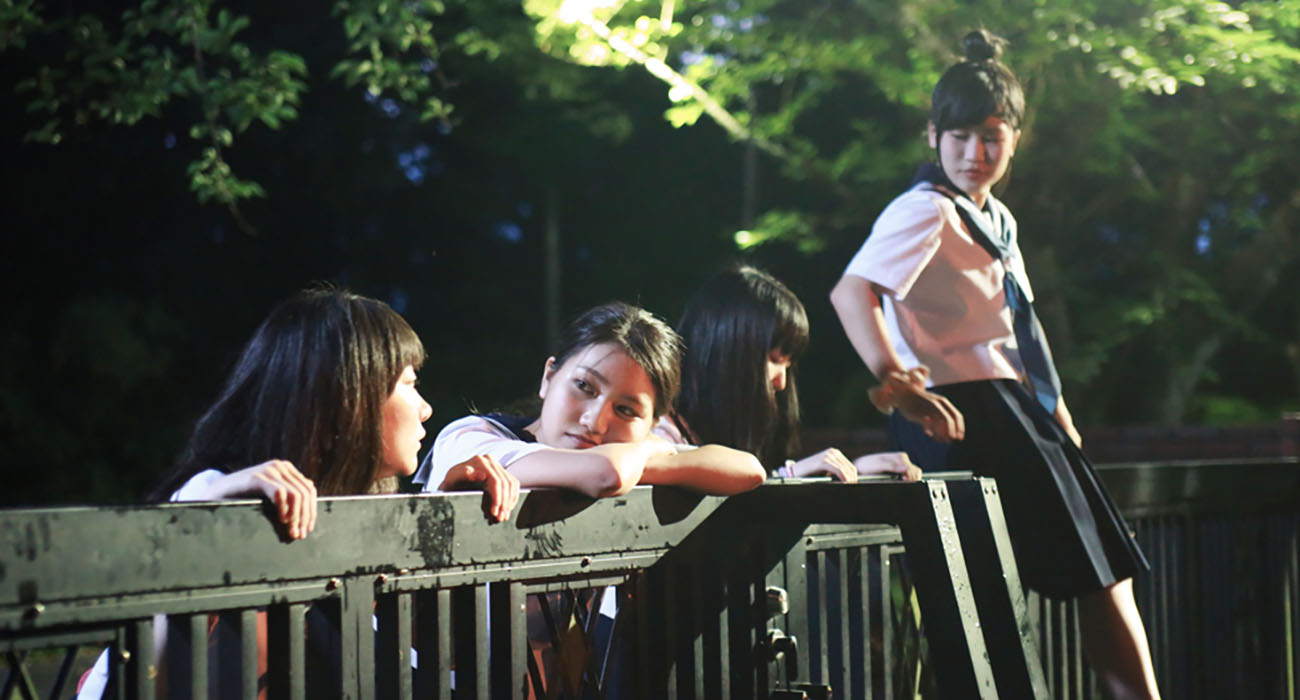 The first point of connection between our teenage protagonists across both films is their love of music. For the young girls in Our Huff and Puff Journey, their love for the rock band Creephyp is what sets up the premise.

It is their final year of high school the end of their childhoods, and they are going to fulfil this dream before they have to grow up. We learn that the four girls, Chie (Saku Mayama), Ichinose (Sonoko Inoue), Sattsun (Reika Oozeki) and Fumiko (Toko Miura), are very different people and though their paths will eventually diverge later in life, their love for this one band at this time in their lives is what has brought them together. At one point, their anticipation for the concert just days away reaches fever pitch and they exclaim, “I’m so excited I might die!”. Music has always functioned as a means of communication in that it is capable of bringing different people together. And in the case of Matsui’s film, the girls’ mutual understanding of this shared love, anticipation and hope is infectious and incredibly relatable. 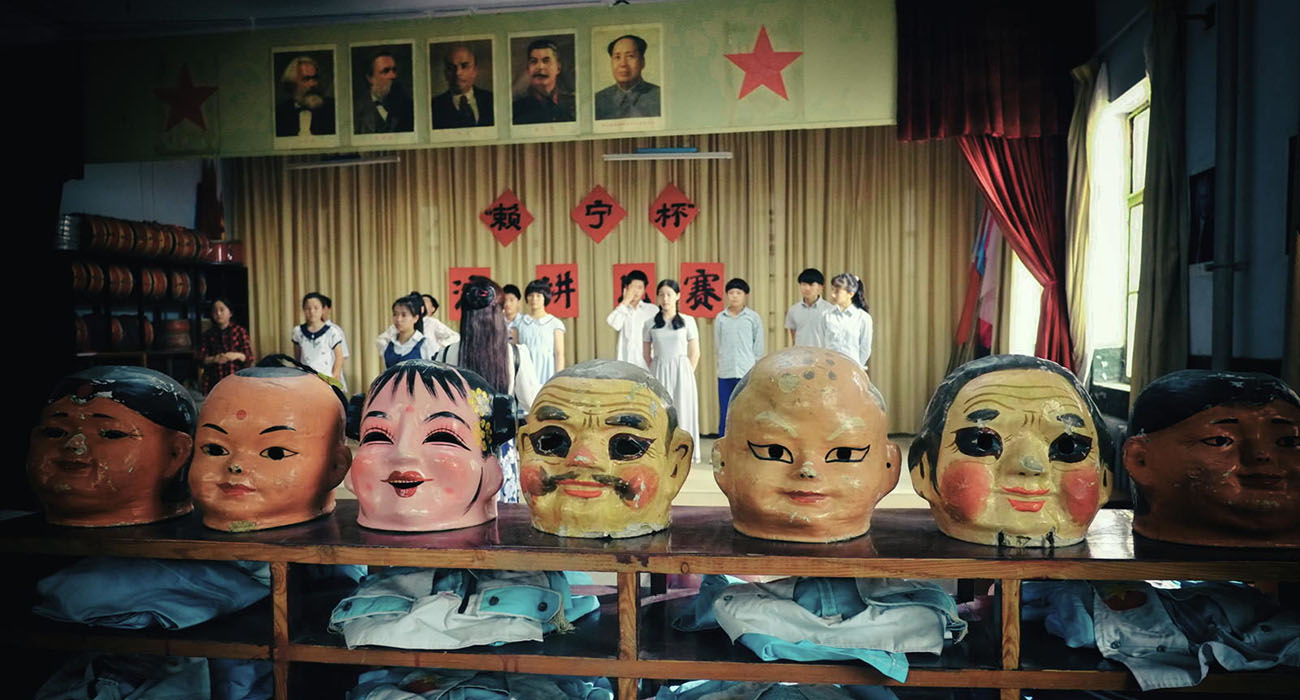 In What’s in the Darkness, pop music is one of the only things that Wang can use to remind us of our protagonist Qu Jing’s (Su Xiao Tong) girlhood. The film deals with some dark themes, but is always careful to balance the insidiousness of the town murders with the normalcy of Jing’s coming of age, even if it is within an authoritarian community. Jing’s love of music is shown through her participation in the school’s performing arts group, listening to every cassette tape she can get her hands on, and most notably, her own private singing sessions on top of abandoned houses in the outskirts of the town.

In any other town, she would be just like every other girl who entertains dreams of becoming like her favourite pop star. In the context of this story however, music is a force of hope for Jing to aspire towards, despite everything else going on. 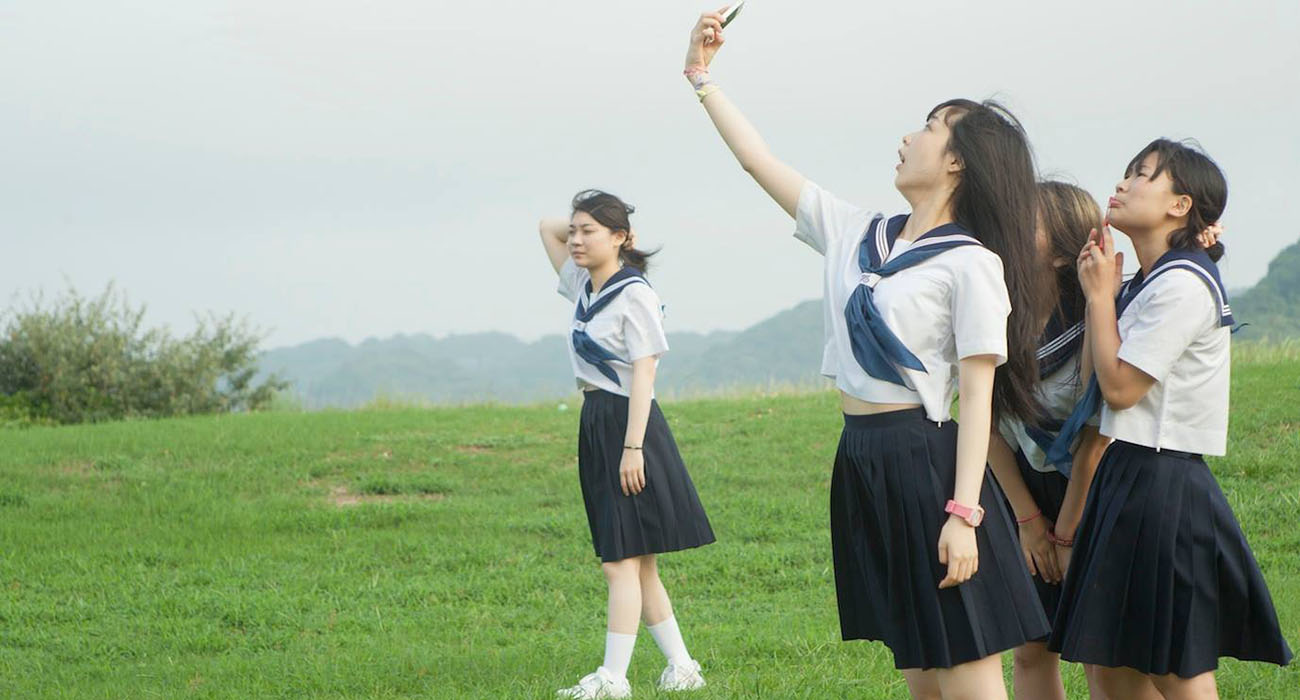 Teenage female friendships are special because of the intensity that stems from the heightened state of emotions of a being a teenager. It’s the kind of bond that inspires films like Take Care of My Cat (2002), Linda Linda Linda (2005) or Sunny (2011). While the four girls in Our Huff and Puff Journey may have initially bonded over a band, it is their friendship that holds them together and drives them on, even when things get rough.

One of the film’s most compelling scenes involves a huge fight between the four girls; a fight that is implicated when one of the girls, Chie, puts a plea out to one of the band members on Twitter for help, sending Fumiko, the most fiercely devoted Creephyp fan of the four girls, into a tailspin. Fumiko accuses Chie of not being a real fan, and begins criticising the other girls. Her feelings for the band may be construed as “over the top”, but the intensity is fascinating. Her emotions and reaction stem from feelings of insecurity at her more confident friends, and her furore towards them is a way for her to push them away and withdraw into herself; bringing her one step closer towards self-destructing.

It is actually heart breaking to watch as you see the group fracture, but it is a testament to their friendship that they are willing to fight it out rather than walk away and give up on each other. And even when it seems like they are not going to make it, the girls pull together as much hope and strength as they can muster to get each other over the finishing line. It is bittersweet and raw, and it is a credit to Matsui’s great writing that his film so accurately captures the intensity of teenage female friendship. 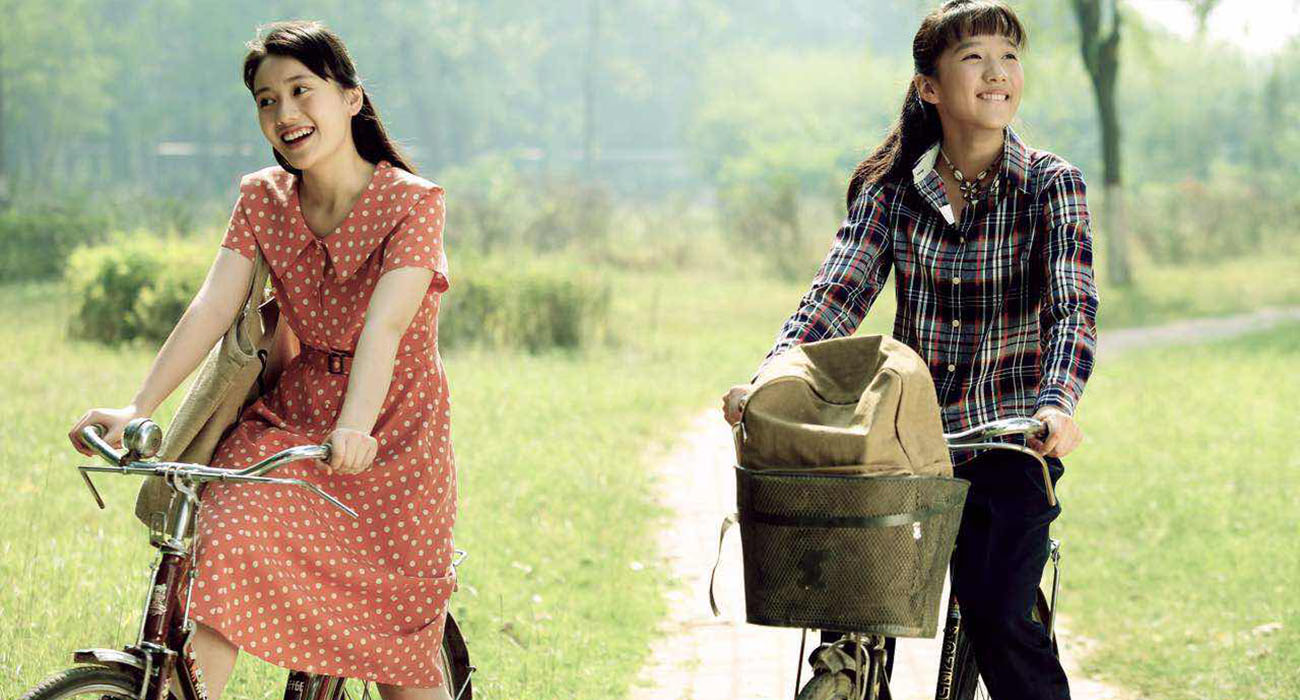 Meanwhile, the bad girl/good girl friendship is explored in What’s in the Darkness, where rebellious outcast Zhang Xue befriends good girl Qu Jing. Their dynamic is classic — the girls care for one another and have fun together but there is natural jealousy and wariness between them because of how different they are and the tropes they embody. Zhang Xue teaches Qu Jing how to ride a bike and takes her to curl her hair, and she is bossy and occasionally patronising about her knowledge. Qu Jing is interested in exploring her womanhood because of her friend, but because of the puritan values she’s been raised on, she is also conflicted and resents Zhang Xue for the way she embraces herself. In one scene, Qu Jing accuses Zhang Xue of making her look deliberately ugly by comparison.

The resentment but mutual love between teenage girls is natural and, when portrayed right, also complex as it tells the audience about the way girls have been socialised to internalise misogyny, as opposed to the usual simplistic reduction that all girls are catty to each other. The girls’ friendship is exemplified best when Zhang Xue goes missing, and Qu Jing is the only one in the entire town who is concerned. It is revealed at the end, that Zhang Xue has run away to Hainan, a dream she has long had, and sends a clandestine postcard to her only friend in her hometown to let her know.

Zhang Xue showed that she was better than the small town and its narrow mindedness and found a way out, while still reaching out to her friend. It is a hopeful touch that Qu Jing will eventually find her way out to a brighter future with the example of her friend.

Being a teenager is hard enough as it is but for girls, the transition from girlhood to womanhood is arduous to say the least. Young women everywhere discover from an early age how their sexuality may end up being the only thing they’re valued for and how it can also be used against them. In What’s in the Darkness, female sexuality is seen as dangerous, a mentality still prevalent in conservative Asian societies.

The murder victims are also rape victims and the nature of these murders leads a curious Qu Jing to educate herself as best she can about sex and pregnancy in her repressive society. But in educating herself, she continuously runs into figurative walls like her father who, in a state of paranoia, senses his teenage daughter’s buddy sexuality as something that should be suppressed in the wake of these murders. In doing so, he isolates her and causes a rift in their relationship which could have been avoided had they discussed these issues honestly.

Qu Jing’s friend Zhang Xue, is regarded as a floozy and worthless for flaunting her womanhood (i.e. wearing makeup, doing her hair). Her refusal to cave into the town’s puritan morality leads to her being ostracised, even as the men in town still leer at her, reflective of the double standards privileged to men. When she goes missing, there’s a malicious sentiment that radiates through the self-righteous older generation of the town that she got what was coming to her.

In Our Huff and Puff Journey, the girls’ road trip starts off full of laughs until they reach the bigger cities. They start hitchhiking and we are reminded that they are only 17. The last person they hitchhike from is an aloof young man. At a stop, while the other three girls are asleep, he cautions Sattsun, by saying they could face danger hitchhiking, and to prove his point that strangers (men) can be dangerous, he proceeds to kiss her. It’s not cute and though Sattsun may have had interest in him, the boundaries ought to be made clear.

Later on, the quartet are pushed into working as hostesses to raise cash for their journey. Though these girls have decided to make the best of their situation, it is nevertheless uncomfortable as viewers to see their employers (again, men) not only hire underage girls but also dismiss two of them for not being pretty enough. Sattsun and Fumiko, the two who are dismissed, then beat themselves up over not being pretty enough to work and help their friends. It is a distressing mentality that their looks not being able to make money is what these girls worry about.

Soon after, Sattsun, who has documented the group’s exploits on social media, uploads pictures of them at the clubs, the story takes another dark turn as they are harassed and slut-shamed online, with the comments yo-yoing between calling them either ‘ugly’ or ‘whores’. 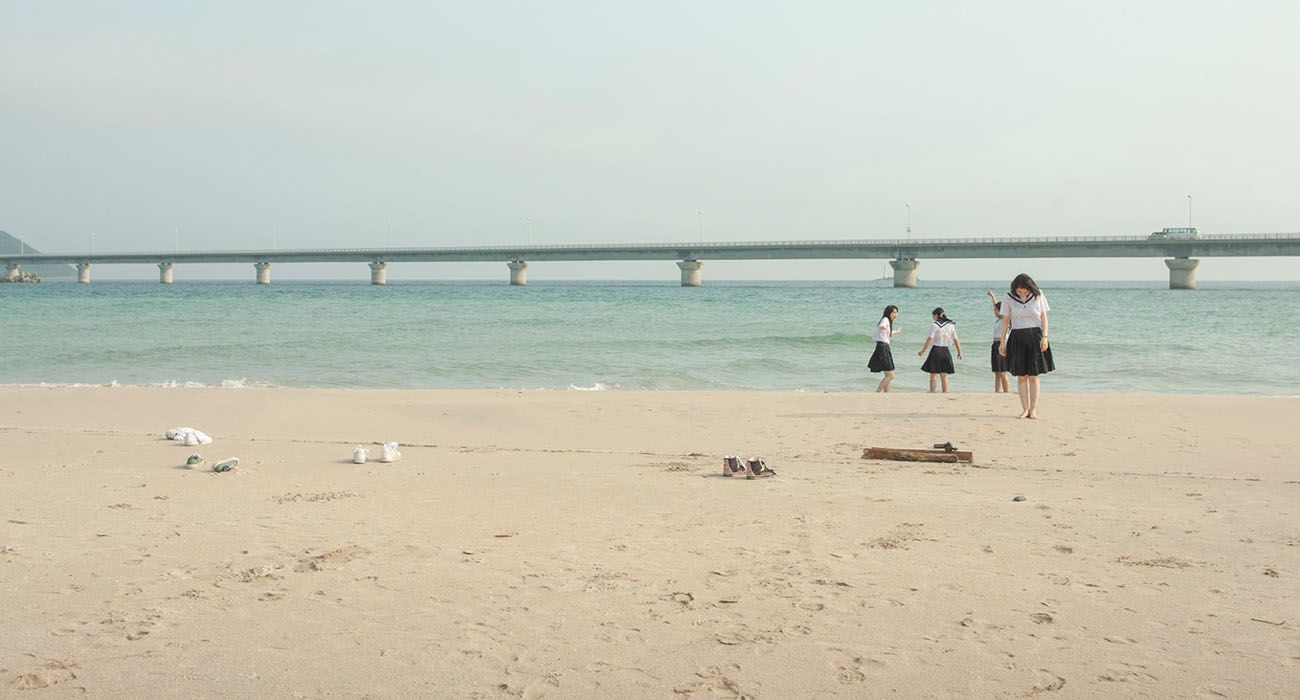 “My life has finally begun,” declares one of the four protagonists in Our Huff and Puff Journey, and indeed for many teenagers it may truly feel that way as they, for the first time, begin to really discover who they are and where they fit in the world. It is perhaps no wonder why filmmakers around the world have continued to explore a stage in life that is about new discoveries and experiences that are intense, emotional, uncomfortable and exciting all the same time.

Yet in Asia, there seems to be a particular appetite for these teen films, as seen by the commercial success of Frankie Chen’s Our Times (2015), or Kang Hyeong-chul’s Sunny. Both Our Huff and Puff Journey and What’s in the Darkness are no different as they too continue the region’s interest in telling those kinds of stories.

Matsui and Wang’s films are honest in its presentation of the teenage girl experience and make sure to never trivialise their interests. Both present the complexity of the teen girl friendship with care and show the level of intimacy teenage girls share with each other, yet both are also unafraid to explore that friendship’s uglier moments through conflict and insecurity. This uglier side of girlhood is further emphasised in the exploration of sexuality, a theme that both films use to critique societal expectations of girls and women.

With teen films in Asia, there is a balance between the fluffy stories and the more complex ones that independent cinema and festival films are showcasing, and it is an encouraging sign that filmmakers are still finding new ways to tell these stories, and want to tell stories about girls especially.