Lust, Caution: The storytelling within its costume design

This feature is part of an ongoing series focusing on the storytelling found within costume design. Companion video essay coming soon.

At the time of its release, Ang Lee’s award-winning 2007 thriller, Lust, Caution, was embroiled in much controversy. The issue largely stemmed from the film’s sexually explicit scenes between a debuting Tang Wei and Hong Kong veteran Tony Leung Chiu-wai. As a result, Lee’s film became heavily censored in some countries and actor Tang Wei, who was lauded with praise for her debut feature performance, was banned in China.

But beyond the controversy and intense sex scenes was a film that detailed a complicated relationship between its two lead characters — undercover operative Wong Chia-chi (Tang Wei) and Japanese sympathiser Mr Yee (Tony Leung Chiu-wai). It was an intriguing espionage story of love and betrayal told from the perspective of a single character. But in re-appraising the film for its tenth anniversary, one can also find that it wasn’t just through the focus of Tang’s character where the film’s story is revealed. In appreciating some of the finer qualities of the film, especially where it relates to the storytelling in Wong’s shifting identities, one should look no further than to the clothes she wears throughout the film.

The Youth of Wong Chia-chi 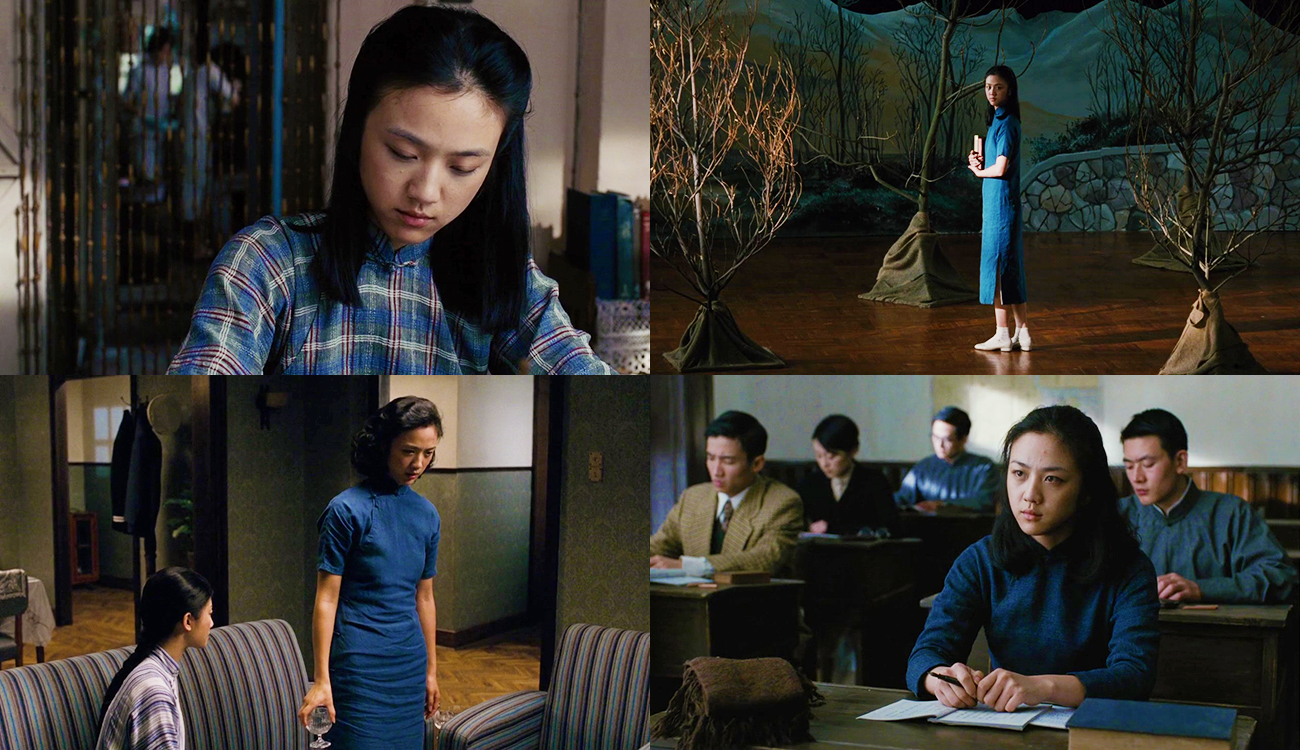 Unfussy fabrics, the dark but decidedly straightforward navy blues and the cut of her simple cheongsams represent her youth and innocence and lack of sophistication as a university student.

In the first act of the film, we see Wong as a university student whose style is fairly simple. Her lack of makeup, unstyled hair and fairly conservative style of cheongsam (or qipao as its known in China) are proof of this. But what’s important to note about her cheongsam as a young student is that they are mostly blue. Blue is Wong’s colour, a point that’s subtly driven into the audience as the film progresses.

When she begins to inhabit the role of Mrs Mak, Wong’s blues become less visible but they remain present nevertheless. She sports a powder blue cheongsam, for example, while her friends practice shooting on the beach, a visual cue to announce that Wong has already begun her transition into the role of Mrs Mak.

When Wong transforms into Mrs Mak, she becomes the ultimate 1930s Shanghainese socialite. Her hair is curled and styled, she wears lipstick emphasising her cupid’s bow (as keeping with the trend of the period) and her cheongsam are stylish, elegant and made of silk — a far cry from the fabrics of her university days. 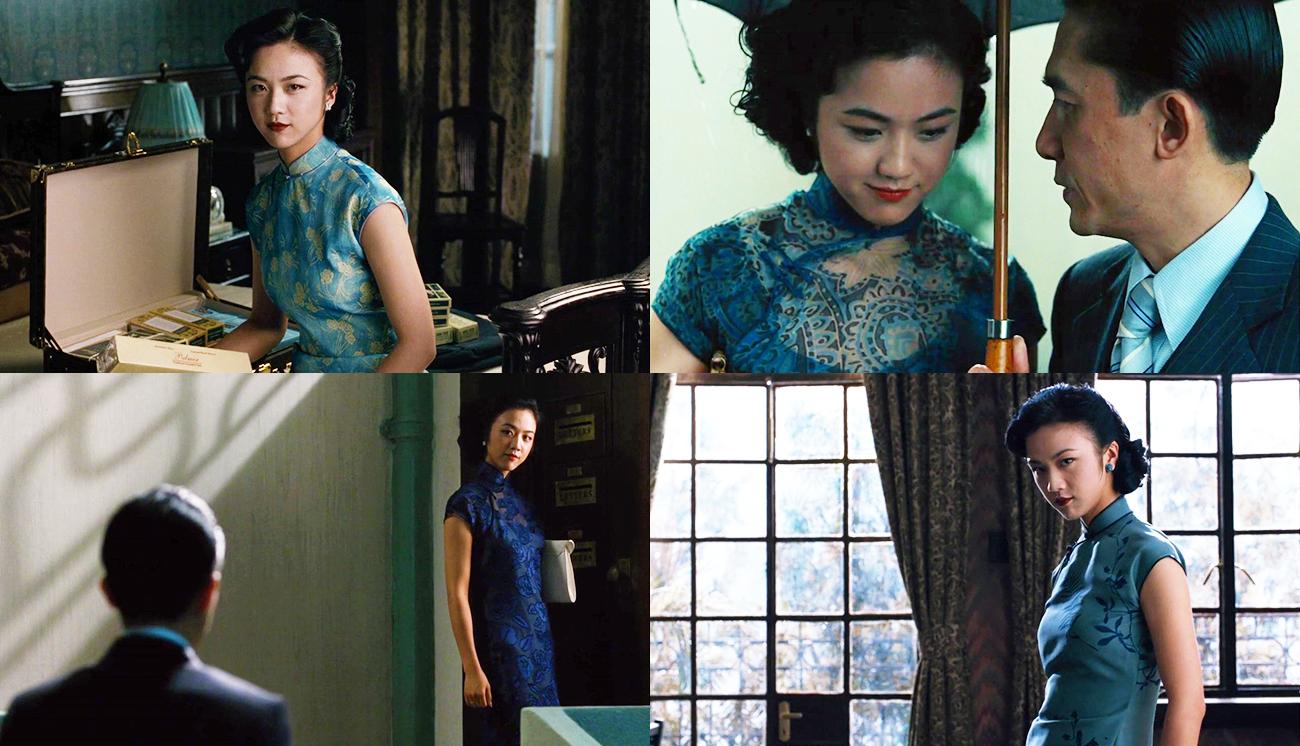 Though elegant in design, Wong carries the blues of her former life, indicating that she is has perhaps not yet fully inhabited her role as Mrs Mak.

However, instead of taking on an entirely new colour to befit this ‘new’ identity, Wong carries with her the blues of her old life, bringing her ‘true’ self into the role of Mrs Mak. As Mrs Mak, her blues are brighter but also more complicated. Gone are the austere simplicity of her former darker navy blues. Now, Mrs Mak’s blues come in varying shades of peacock, cobalt and indigo. Her look is accompanied by matching jewels to accompany the role she plays. The patterns of her cheongsam are sharply contrasted by the plain ones of her university days, symbolising a maturity in who she is but also the complexity of her identities.

In contrast to the older wives with their darker colours, longer sleeves and heavy jewellery, the Mrs Mak persona is a symbol of youth revisited. But this time, her blues are paired with the slinky cuts of her cheongsams and barely-there sleeves, bringing focus to the femininity and sexuality that defines Wong’s identity as Mrs Mak.

The Darkness of Mrs Mak

Although blue dominates, two other major shades also appear in Wong Chia-chi/Mrs Mak’s wardrobe: browns and blacks. Their effect in the film is startling, especially when they are so obvious as a contrast to the blues in her wardrobe.

For Wong, browns and blacks tend to show up in her wardrobe when she is conflicted or in turmoil. The first time we see brown is on her house robe of blue and brown flowers which she wears after having sex with her classmate. It is an act she derives no pleasure from, a duty and an obligation to her mission that had to be done so that she would know ‘what to expect’ when she has to have sex with Mr Ye.  The brown flowers that entwine themselves with the blue ones look practically parasitic.

As Mrs Mak, the first sexual encounter with Mr Yee is violent and leaves her shattered, both physically and emotionally. We see the emotional manifestation of this encounter in the aftermath where Mrs Mak is dressed in an all-black cheongsam a day later, as she has tea with the other wives. Instead of her usual blue, Mrs Mak is clothed in the darkest block of colour (darker than the wives in their usual dark cheongsams), indicative of her mental and emotional state.

The Colour of Her Heart

If blue is her identity, pinks and purples are the colour of Wong’s heart, and symbolise her vulnerability. After Wong and her university friends go out to celebrate the success of their play, she wears a plain lavender cheongsam. Wong leans out from a bus and allows the rain to fall onto her face and hands — there’s a sense of youthful innocence and freedom in that moment. It’s a rare moment of peace in the film that allows the audience and the story to breathe without any of the loaded tension that dominates the film. As the narrative plays out, that moment is marked as being the end of Wong’s innocence.

Mrs Mak meanwhile wears a purple set of pyjamas when she finds Mr Yee burning files in the middle of the night in his study. It is one of the few times he talks about his work for the Japanese government with her; an important moment in their relationship. Although Mr Yee is in the position of power in their relationship, indicated by the suit he still wears in the scene and Mrs Mak’s vulnerability in her sleepwear, it is her unguarded nature that allows Mr Yee to open up to her. There is a marked shift in their relationship, for as impenetrable as Mr Yee appears to be, Mrs Mak has knocked down his walls and made him vulnerable too.

Floral patterns also tend to show up in Mrs Mak’s cheongsam when she is particularly emotional. The most notable instance is when she wears a dark blue cheongsam with a pattern of white lilies. It’s a focus pulling pattern with a sharp contrast between the dark blue and white. She wears this the day after the purple pyjama scene to play mahjong with the other ladies where she stands out more than every one and to report to her superior about the mission (here, she has a highly intense rant about her dark and complicated relationship with Mr Yee). In both cases, her emotional turmoil is at an all-time high.

However, in a key scene at a Japanese restaurant where Mrs Mak sings to Mr Yee and lays in his lap, there is a softness in their relationship and in both characters that hadn’t been revealed prior to this scene. Here, Mrs Mak wears a blue cheongsam, but this time, a pink flower pattern is embroidered all over. Keeping in mind the colours of Mrs Mak, it is a cheongsam that shows true significance, suggesting that Mrs Mak has completely given in to Mr Yee. 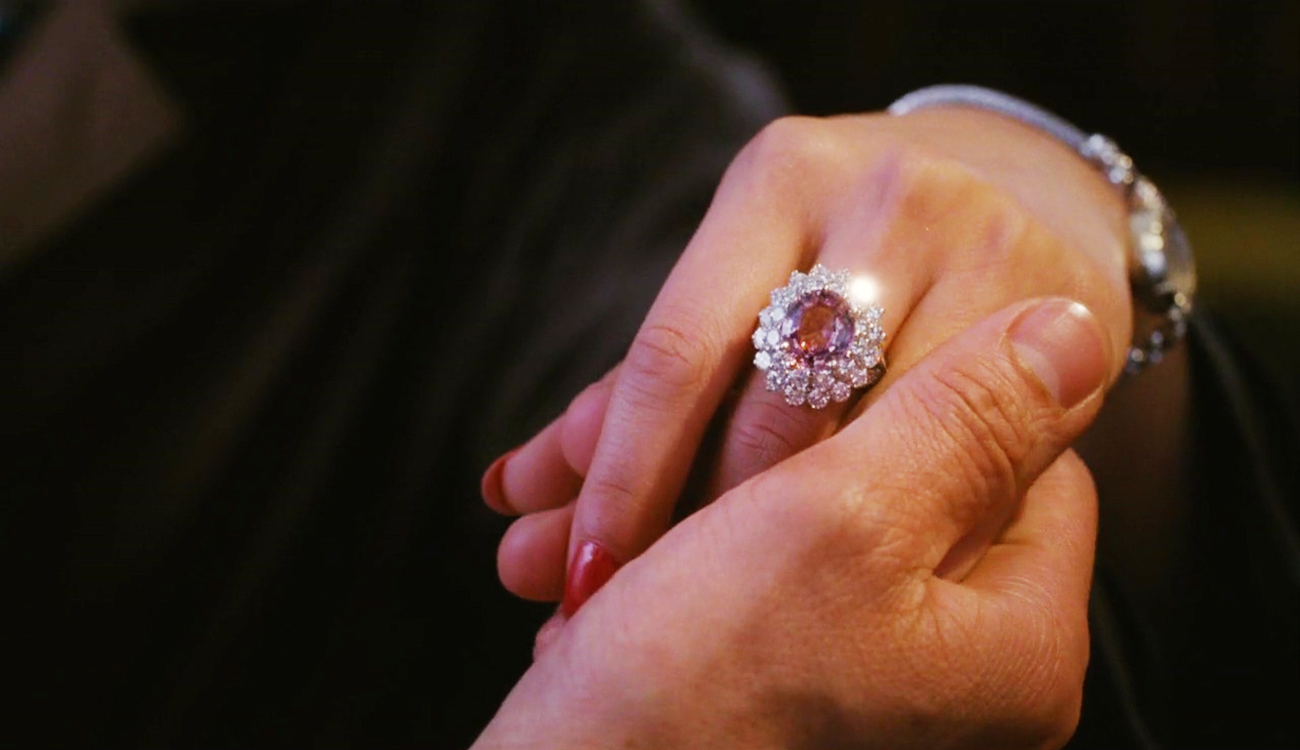 The pinks and purples of Wong/Mrs Mak’s heart come to a head with the ultimate symbol of the heart — the six carat pink diamond ring that Mr Yee has made for her. The pink diamond ring is symbolic of Mr Yee’s depth of emotion for Mrs Mak, and how much he has let himself become unguarded around her, both physically and emotionally. It shows how far both Mr Yee and Mrs Mak have come emotionally as individuals, and in their relationship. And of course, it ends up being Wong/Mrs Mak’s downfall as she ends up deciding to save her lover over upholding the loyalty to her mission.

When one of Mrs Yee’s mahjong companions comments that Mr Yee has a good temperament, Mrs Yee says, “It’s just acting”. And really, this was what Lust, Caution was about — people acting and playing the roles they’re assigned in order to survive. But for Wong, her inability to disassociate herself the Mrs Mak role is what becomes her undoing. As Wong’s superior points out, her effectiveness in the role of Mrs Mak lies in the fact that she is untrained. Try as she might however, Wong never really puts on a performance and instead finds herself slowly becoming her part. All of this is captured brilliantly the film’s use of costume design.

Instead of an entirely new colour palette for the character of Mrs Mak, carrying over the blues of Wong not only indicates that both women are one and the same but also further emphasises Wong’s inability to separate her two personas. Wong’s failure to detach herself from her role makes her more honest and emotionally vulnerable, thus attracting Mr Yee, a man whose profession is tied to lies and deception. The dramatic irony of Wong’s fascination with theatre and Hollywood movies as a form of escapism, and Wong being the ‘ultimate actress’, is not lost.

In identifying blue as Wong’s colour, both director Ang Lee and costume designer Lai Pan brought extra dimension to Lust, Caution‘s tumultuous story. More than just a means of period dressing, consideration clearly went into the costume design’s storytelling as Lust, Caution ingeniously captured the emotional turmoil and psyche of a woman at odds with herself, her country and her love.