This article was created in partnership with Japanese Film Festival Australia. The festival will tour nationally from October – December 2019. For more information, visit the festival website.

After watching Charlie Chaplin’s films at a very early age, actor Shota Sometani knew he wanted to pursue acting as a career. He took his first steps into show business at the age of seven, appearing in minor roles across feature films and television dramas as a child actor.

Through a combination of hard work and persistence, Sometani would eventually find his breakout role in Sion Sono’s 2011 drama Himizu. The film would serve as Sometani’s launching pad for stardom and ensured that his presence would continue to remain on cinema screens both in Japan and abroad.

The more work he produced, the more noticeable he became. Sometani has already amassed a filmography the size of a veteran’s, with more than 50 film credits to his name — he hasn’t even hit the age of 30 yet!

His choices in roles range from the quirky to the disturbed (sometimes both at once!) and the actor can be seen regularly moving in between intimate indie productions like And Your Bird Can Sing to commercial fare like SAINT☆YOUNG MEN 2nd Century – both of which will be screening at this year’s Japanese Film Festival Australia.

Before you see Sometani’s new films at the festival, we look back on some of the actor’s most memorable work to date. 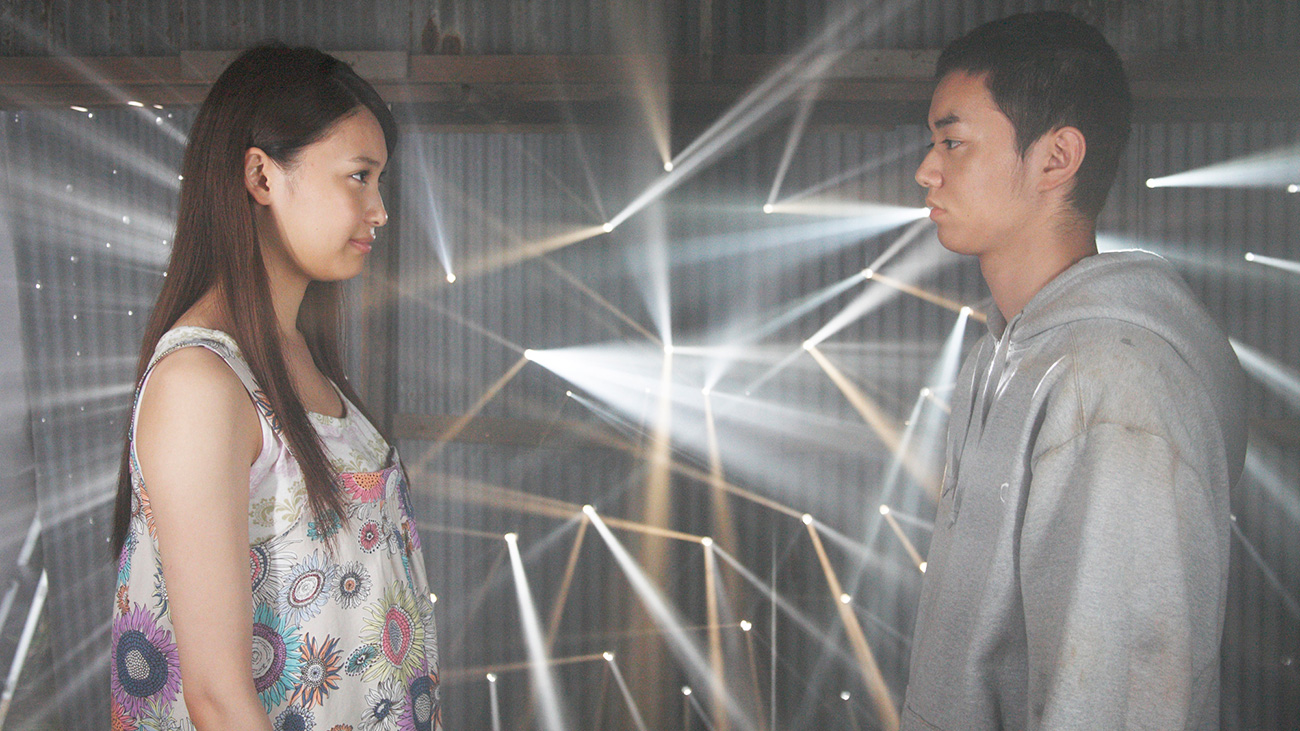 Prior to his international breakout role in Himizu, Sometani starred in the co-leading role of A Liar and a Broken Girl, a genre-hopping film directed by Natsuki Seta.

Based on a novel by Hitoma Iruma, the film’s oddball mix of cutesy teen romance and disturbing character study produced mixed results at the time, but one highlight that is often singled out by critics and fans of the film is Sometani’s performance as the film’s titular liar, Mi-kun.

Though Sometani’s role is less ‘showy’ than that of his co-star Aya Omasa, Sometani stands out in his own way by finding a sense of purity inside a character who identifies as a compulsive liar. This was essential to director Sena, who in a 2011 interview revealed she forbade the actor from diving into the original source material.

In the same interview, Sometani spoke about the challenges he faced in realising this complex character.

“My first impression was I thought this was going to be a very difficult character to portray, but once I started, it was not difficult. As I progressed on the set, I could just naturally understand what my character was going through as he seemed to me.” 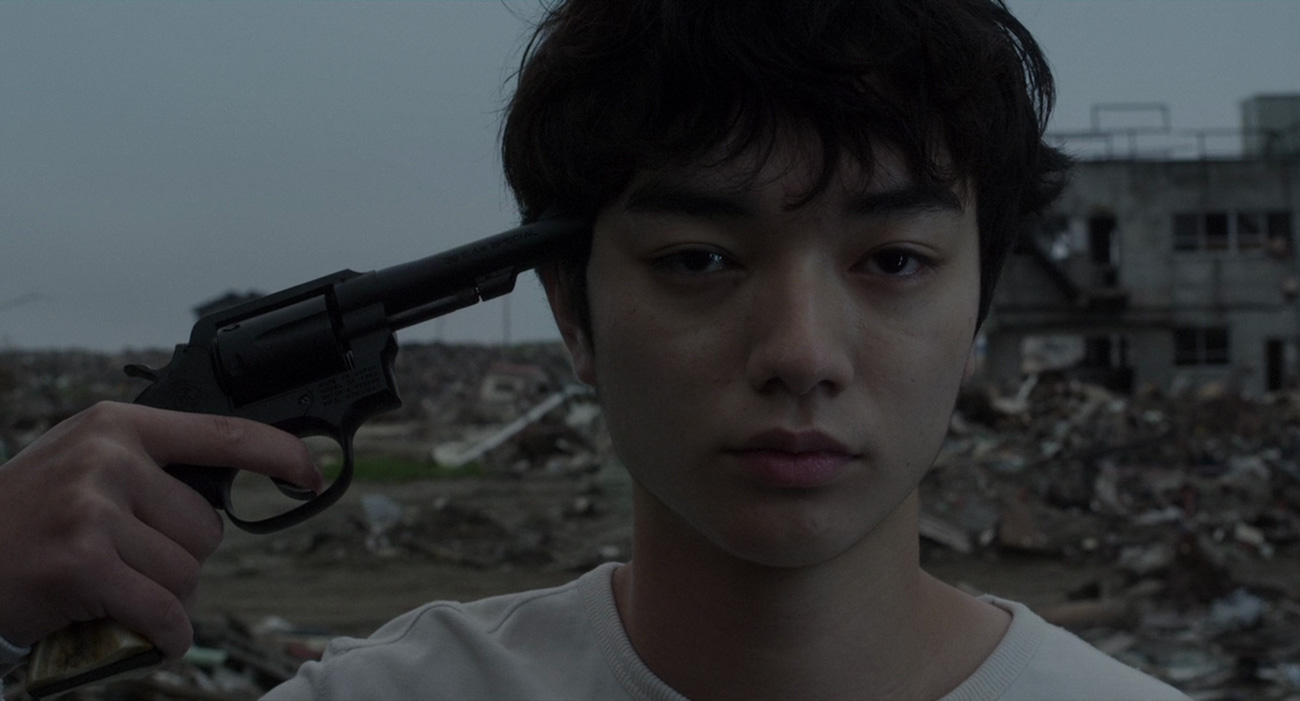 With A Liar and a Broken Girl receiving relative acclaim, Sometani was on the cusp of a major breakout. But it wasn’t until director Sion Sono, famous for brazen films like Love Exposure (2009) and Guilty of Romance (2011), chose him for the role of Sumida Yuichi that Sometani’s career truly begun to pick up.

As the violent and wayward teenager Sumida, Sometani demonstrates his force as an actor not just by the outpour of rage and emotions that he displays on screen, but also with his ability to present the internal conflict brewing within the troubled youth. He does so without much of an expression other than a shell-shocked gaze that sends enough of a message, particularly during one scene involving the actor covering himself in paint. It’s this characteristic that has continued to define him as an actor.

“I want to do the kind of acting that’s convincing and complete, just by standing there, even without any words,” he said in a 2014 interview with The Associated Press.

For his performance in this tragic and brutal coming-of-age drama, Sometani, together with his co-star Fumi Nikaido, picked up the Marcello Mastroianni Award at the prestigious Venice Film Festival — an acting award given to emerging performers.

Sometani’s working relationship with Sion Sono did not stop at Himizu, either, as both would continue to work together on the films Tokyo Tribe and The Virgin Psychics. 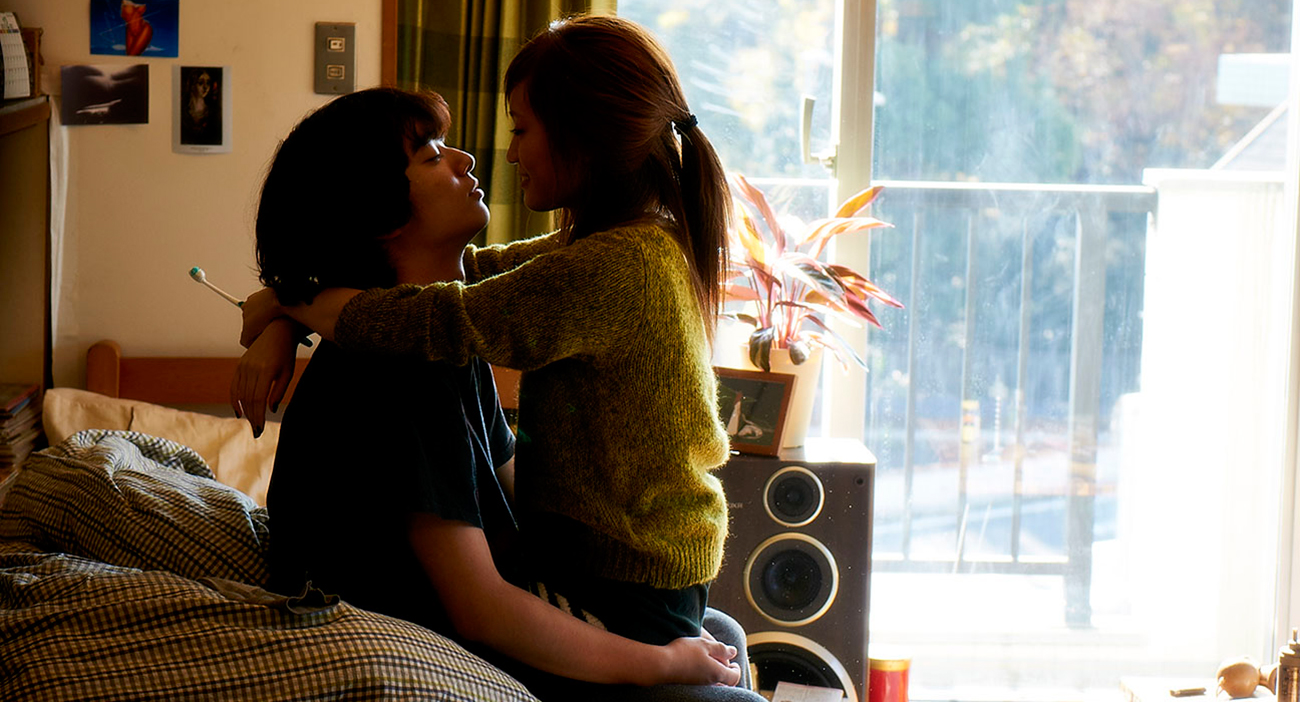 Following his international breakout role in Himizu, the young actor found further success by increasing his output of work. He accepted a variety of roles both big and small with big name directors including Takashi Miike (As the Gods Will, Lesson of the Evil), Mamoru Hosoda (Wolf Children, The Boy and the Beast), Kiyoshi Kurosawa (REAL) and Takashi Yamazaki (The Eternal Zero, Parasyte).

A sobering and melancholic film, Sometani leads the ensemble drama as the establishment’s manager. On his performance in the film, Hiroki, in an interview with EasternKicks, had a lot to say about Sometani’s ability to inhabit characters.

“With Shota it’s not that he is good at acting or not good at acting, he has this ability to physically embody the atmosphere of the film. Just by his presence alone, he sets the tone of the film. That is what I like about him. It’s not his inherent characteristics being projected outward, he embodies what he needs to in that specific space.”

He further elaborated and singled out one scene which highlighted Sometani’s strengths as a performer.

“So, there is a scene in the film where he is eating ramen and sort of mumbling and complaining to himself, it was interesting, none of them were important complaints, all very trifling. But that is exactly the realistic depiction of the type of character he was. He was tremendous in that scene.” 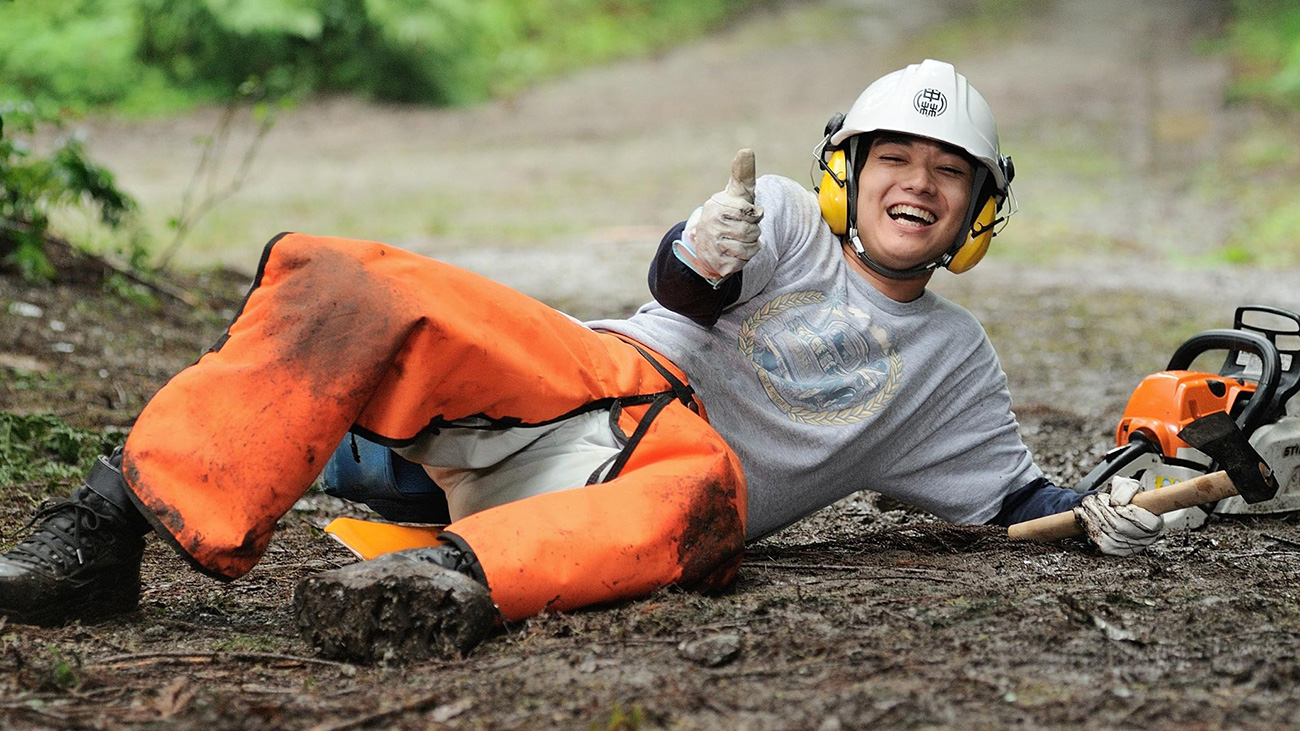 Sometani’s qualities as a dramatic performer continued to shine with each new project he joined, but one area the actor was almost untested in at the time was comedy. That all changed with 2014’s Wood Job!, directed by comedy maestro Shinobu Yaguchi (whose film, Dance With Me is also included in this year’s Japanese Film Festival program).

In Wood Job!, Yaguchi lets Sometani’s comedic chops shine in a role that further showcases Sometani’s versatility as an actor. Sometani plays the film’s protagonist, Yuki, a graduate who moves to the countryside after being dumped by his girlfriend and realising his career prospects in the city amount to zilch.

From changing the pitch in his expression to exaggerating his emotions to the point where a joke is still conceivably funny within the world of the film, it’s a part that easily changes the perception that one might have of Sometani as a performer.

Aside from the laughs, Wood Job! is also a movie filled with quiet moments of reflection and spirituality – look to a scene where Yuki comfortably absorbs the grace of nature surrounding him while on the back of a truck to also see the humility Sometani brings to the role.

Since Wood Job!, Sometani has made a handful of returns to the comedy genre. One of his latest comedies, SAINT☆YOUNG MEN 2nd Century, can be seen at this year’s Japanese Film Festival Australia.

Sometani’s role as a Japanese caricature of Buddha is the perfect straight-man to Kenichi Matsuyama’s more outrageous version of Jesus but that doesn’t mean the young actor isn’t also capable of hilarious feats in the film. One vignette involving the religious duo testing their strength at an arcade immediately comes to mind.

SAINT☆YOUNG MEN 2nd Century also wouldn’t be the first time audiences see Sometani sporting prosthetic ear lobes too as he was last seen wearing them for a great scene in Wood Job! 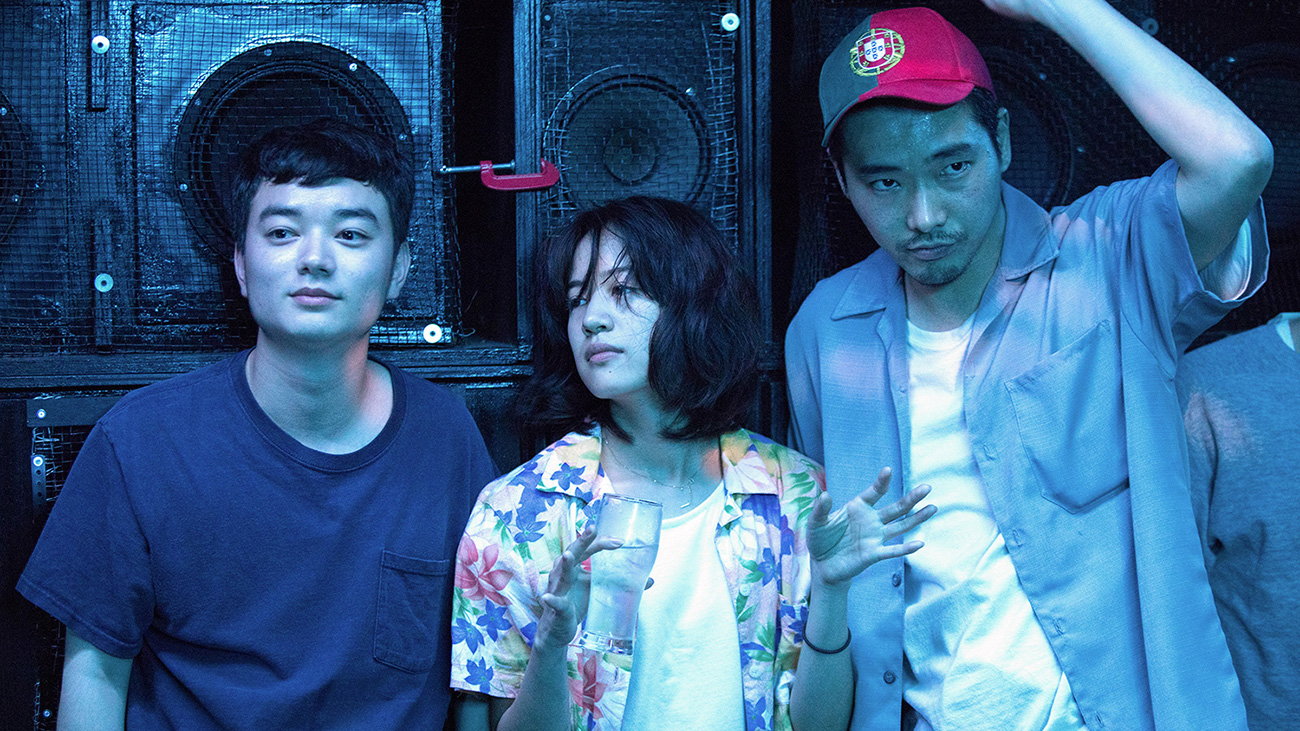 No matter how many blockbusters he stars in or how established his directors are, Sometani has always found time to work on smaller projects with exciting new filmmakers. And Your Bird Can Sing, screening at this year’s Japanese Film Festival, is one of them.

Directed by emerging writer-director Sho Miyake, this Hakodate-set film about three young adults whose lives intersect over the course of summer is a beautifully shot urban drama with three naturalistic performances grounding the entire experience. Scenes where Sometani, alongside actors Shizuka Ishibashi and Tasuku Emoto, interact as a group – most notably at a convenience store and inside their apartment – are particularly special, as viewers witness how effortless their performances appear.

Though his role in this film is in a supporting capacity, Sometani’s strengths as a performer are nevertheless present. Appearing to operate on instinct, the actor measures the right amount of youthful haziness to match both the role and the film’s overall aesthetics. His approach to this part, like so many others before it, is seemingly backed up by a quote the actor gave in 2014:

“It’s a mystery. I don’t have a method, even in myself. You have to believe in the role, the blood that’s flowing in the character, the basics.”

His instincts as an actor have certainly helped him stand out and make it this far. Sometani has indeed been blessed with some outstanding parts and fortunately has continued to take on interesting material both in commercial and independent fare.

And with many years of acting still ahead, Sometani’s best role may still be out there.