In 2018, Japanese filmmaker Hirokazu Kore-eda reached a career turning point when he secured the Palme d’Or, Cannes Film Festival’s highest honour, for his beloved drama Shoplifters. With Shoplifters’ success, all eyes were on what Kore-eda would do next.

Turning to a stage script he began in 2003, Kore-eda decided to go into production for what would be another career first — his first non-Japanese language film.

Reconfiguring his old stage script, Kore-eda cast Juliette Binoche (who had long desired to work with the director), sought a French film crew and – equipped with further international acclaim under his wing – was successful in casting French legend Catherine Deneuve for the co-leading role.

Despite a change in language, all of the beloved hallmarks of Kore-eda’s acclaimed filmography remain. The Truth expands on the filmmaker’s interest in family dynamics by observing the mother-daughter relationship shared between actress Fabienne (Catherine Deneuve) and her screenwriter daughter, Lumir (Juliette Binoche). To get the script right, Kore-eda worked closely with his co-leading actresses to inform their characters.

“Originally when I wrote the script, I thought Juliette Binoche’s character was rather childish,” Kore-eda said through the help of interpreter Arthur Tanaka.

“Of course, what Juliette Binoche said was, ‘Well, we’re looking at this character who has her own child and she’s nearing 50. She obviously has some childhood trauma but that can’t define everything that she does and so she’s moved on’. So obviously it won’t be just this repressed or shunted anger; it’ll be other things where she has a relationship with her mother where she can crack jokes at her or have barbed remarks that are backwards and forwards. [The interactions would] be more rounded and I think those discussions all went into the development of the script.”

Director Kore-eda working on the set of ‘The Truth’. Photos via Instagram (@juliettebinoche).

The collaborative effort pays off in spades. The Truth is unabashedly Kore-eda in design, and his actresses’ contributions have resulted in many moments both heartfelt and hilarious. Deneuve, perhaps unsurprisingly, excels as the grand dame of French cinema Fabienne, a role some may feel has been partly shaped by frequent Kore-eda collaborator Kirin Kiki who sadly passed away late last year.

“A lot of people in Japan have come away from the film with that impression,” Kore-eda said of Deneuve’s role.

“But the way [Kiki and Deneuve] built their characters are completely different. If they have anything in common, it’s the fact that Catherine Deneuve and Kirin Kiki are both very blunt. There are some harsh lines that Fabienne says in the film and they’re the kind of things that maybe Kirin Kiki might have said in her time as well. So it’s not unthinkable.”

When asked who he would have cast for The Truth if it had been set in Japan, Kore-eda chuckled before answering.

“So the point about this production is that I made a film that I was pretty sure I couldn’t make in Japan, and part of this was that I didn’t have anyone that I could cast for this kind of role. That led to this being made in France because France has Deneuve! I don’t think I could have done it in America either.”

Given the new language and Deneuve’s star-power, The Truth could be some international audiences’ first exposure to Kore-eda. In many ways, his non-Japanese language is a great entry point for those unfamiliar with the filmmaker’s work. Memory, family, performance, loss – the hallmarks of Kore-eda’s films are all here. Given this strong continuity throughout all of works, even as he crosses cultures and audiences, I have to wonder in what ways does the director feel The Truth might come to represent him? Kore-eda ponders his response.

“It’s really hard to say. I don’t really think about those things. I think it takes about 10 years before you sort of understand what a project did for you, what it meant to you and those things really only become apparent in hindsight and it does take about 10 years. So we’ll see!”

On the past 10 years that have led to The Truth, Kore-eda reflects on what his experiences across films like Still Walking, After the Storm, Our Little Sister and I Wish have taught him.

“I guess just over 10 years ago when my mother passed away and shortly after that my daughter was born and I became a father and parent, that change brought about a lot of projects that involved my thinking at the time about these topics,” he said.

“So that’s between 2008 and 2016 [where] I’ve made these films that pertain to family and the roles people play within families. And I think the conclusion that I’ve drawn from that is that you don’t have to try and make a film that aims to be universal and reaches far; you actually have to dig deep into a topic that has urgency to you. And if you dig down well enough, it reaches a point where everyone around the world can appreciate what you’ve done.”

Kore-eda’s contribution to cinema also goes beyond the screen, with the writer-director also taking on the roles mentor and producer to young filmmakers. He recently produced the 2018 omnibus film Ten Years Japan, using his name-value to get eyes on the next generation of Japanese filmmakers. And in 2014, Kore-eda launched his own production company, BUN-BUKU, where he and three other filmmakers — Miwa Nishikawa (The Long Excuse), Mami Sunada (The Kingdom of Dreams and Madness) and Nanako Hirose (His Lost Name) — have taken the lead on notable projects which have included feature films and documentaries. All three women were, at one point or another, mentored by Kore-eda.

Asked why he’s compelled to nurture and support young talent, Kore-eda says its partly to help him carry on working as he does.

“In Japan, directors are their own people; each man to himself. In my case, I surround myself with really young and talented people and directors because it keeps me on my toes and keeps me stimulated and it’s very important because I’ve seen the lone men directors succumb to their own isolations. So I think it’s important to keep channels open,” he said.

“And I kind of have these people around me mostly to poke at me and make sure I’m alive and kicking and doing the right things,” Kore-eda joked.

With regards to Nishikawa, Sunada and Hirose, Kore-eda also says their feedback have gone a long way in shaping how women are depicted in his films.

“One’s in her 40s, one’s in her 30s and one was in her 20s until really recently so if I write anything, I show it to them and I get them to tell me where I’ve got the female characters wrong. I really need that sort of guidance!” 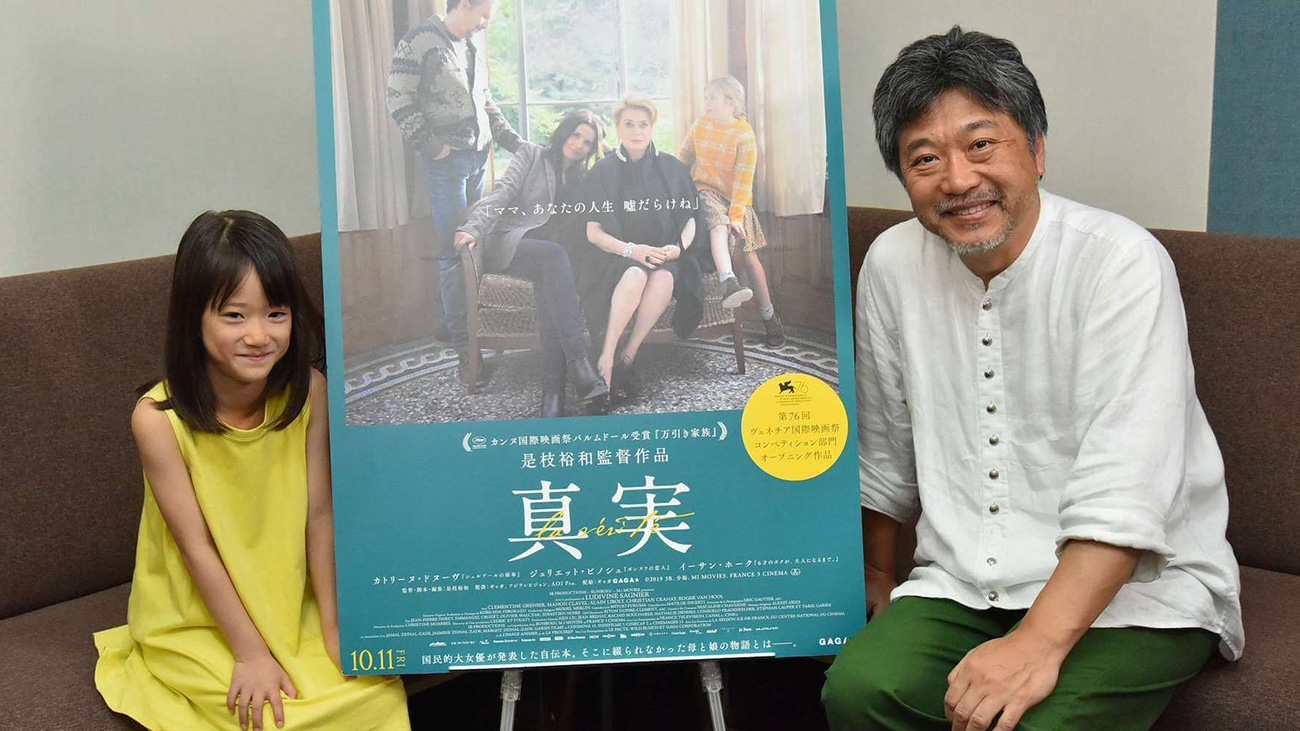 We also asked Kore-eda for his thoughts on Asian filmmaking today and, although he humbly says he doesn’t have a “tremendous perspective”, he does acknowledge the work emerging from South-East Asia.

“I do feel like we’re seeing new talent coming out of the Philippines and Malaysia and Singapore, I am noticing that,” he said before elaborating on his thoughts on the thriving South Korean film industry.

“If you look at South Korea, they’ve got great directors and even if you subtract the Palme d’Or that was given to Parasite this year, you’re talking about directors in their 20s, 30s, 40s, 50s right up to Lee Chang-Dong and they’re all really talented and balanced. I’m actually a little envious!”

Yet with his acclaimed oeuvre stretching film and television and garnering top prizes around the world, many are likely to be envious of Kore-eda’s own success. But not being one to rest on his laurels, Kore-eda is keen to continue onwards as he senses The Truth will mark a step towards a new phase of his career.

“I’m really just in the beginning process of finding a new approach.”

The Truth releases nationally in Australian cinemas on Boxing Day (December 26) via Palace Films. Filmed in Ether would like to thank Palace Films and interpreter Arthur Tanaka for their part in making this interview happen.