Parasite, the new film from acclaimed director Bong Joon-ho, marks a significant milestone in not just director Bong’s career, but Korean cinema as a whole. Seizing the festival’s top prize, director Bong’s film earned its place in history at Cannes 2019 by becoming the first South Korean film to ever win the illustrious Palme D’or – an achievement made especially poignant as it coincides with the 100th anniversary of Korean cinema.

Such an accolade might have stroked the egos of other filmmakers, but when we sat down with director Bong and translator So-young Greenberg during Sydney Film Festival 2019, his response to the monumental achievement was–as one might expect from the director–both humble and comedic.

“Even when I went to Cannes I hadn’t really expected it, and when I see the trophy at my house I feel like ‘oh, why is it there?’ [laughs],” Bong says. 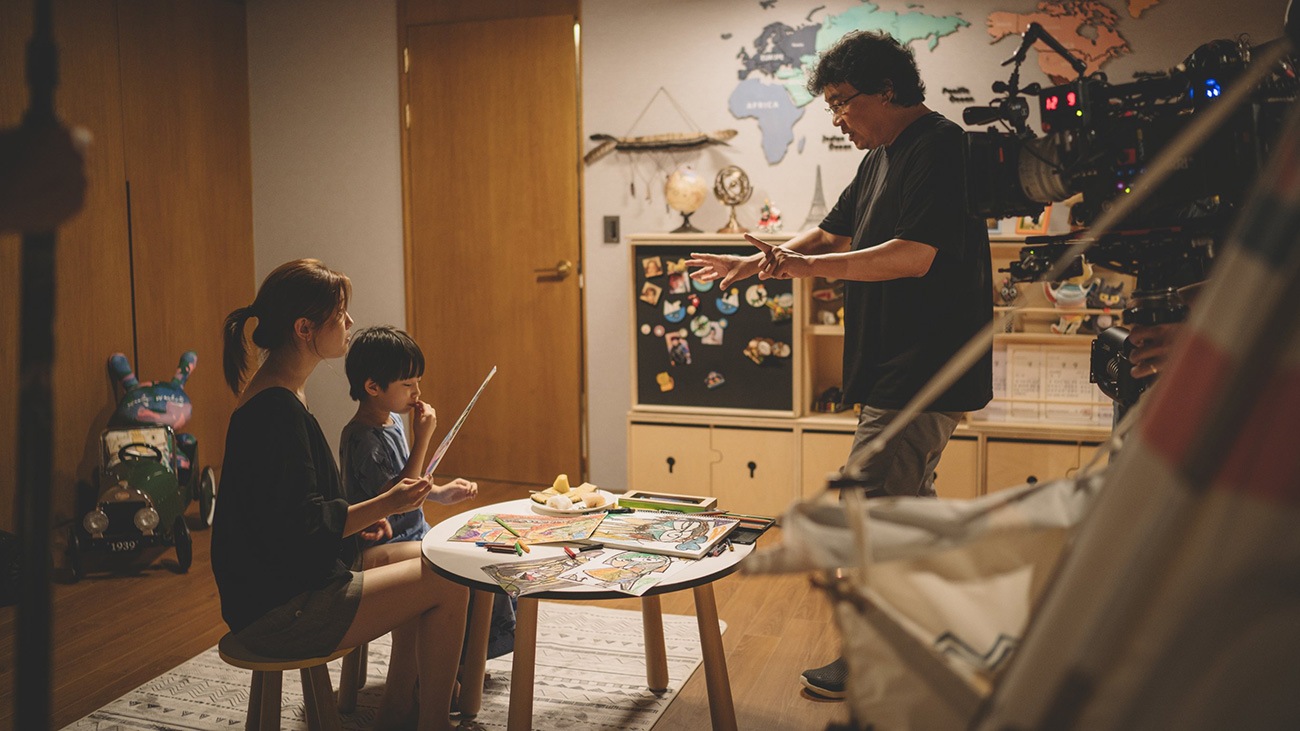 On genre and his enduring global appeal

The first wholly Korean production from director Bong in a decade, Parasite feels right at home with the genre-bending, satirical works of his past. This time, director Bong takes aim at financial and social inequality in South Korea through the story of a lower-class family who infiltrate the lifestyles of the rich by forging their way into domestic jobs for the glamourous Park family.

Genre films the likes of Bong’s have received limited success when it comes to winning Cannes’ top prize. Director Bong sees this unusual meeting of Cannes recognition and genre filmmaking as a factor in its financial success in France and South Korea, with the film on track to become the highest-grossing Palme D’or winner at the global box office.

“I do genre films, and genre films have their own excitements and I think it appeals to the audience,” director Bong says. “And when you look at the list of the films…awarded the Palme D’or there are not that many genre films, except films like Pulp Fiction, so I think that’s contributed to the high box office results.”

Indeed, Parasite is a unique outlier when one considers its place in Cannes’ history, but for director Bong it’s business as usual as his latest continues his trend of mixing disparate genres within the same film. Perhaps most famous is his 2006 feature The Host, which mashes kaiju science-fiction with comedy and family drama. Even his more straight-forward thrillers like Mother and Memories of Murder contain moments of slapstick humour.

Parasite is certainly no exception, with Indiewire claiming “Bong Joon-ho has become a genre unto himself”. When asked for his thoughts on these comments, director Bong reveals he never “intentionally mix[es] or shift[s] genres”, but that this characteristic of his work is a result of instinct and trying to capture the various emotions of everyday life.

“It all comes down to my instinctive sense. What I focus on is that set situation and the characters, and when…they collide with each other there [are] emotions that [are] going to be caused. And I focus on that emotion, that’s what I do,” director Bong says.

“In reality, when you look at your 24-hours of your day, there are a lot of genres that are happening. For example, when you go to work then maybe your boss was angry at you this morning, it makes you feel like its a horror film. And then afterwards you go to have a date with your partner …and then it turns into like a melodrama, right? So I just try to follow the everyday emotions and what happens everyday basically.” 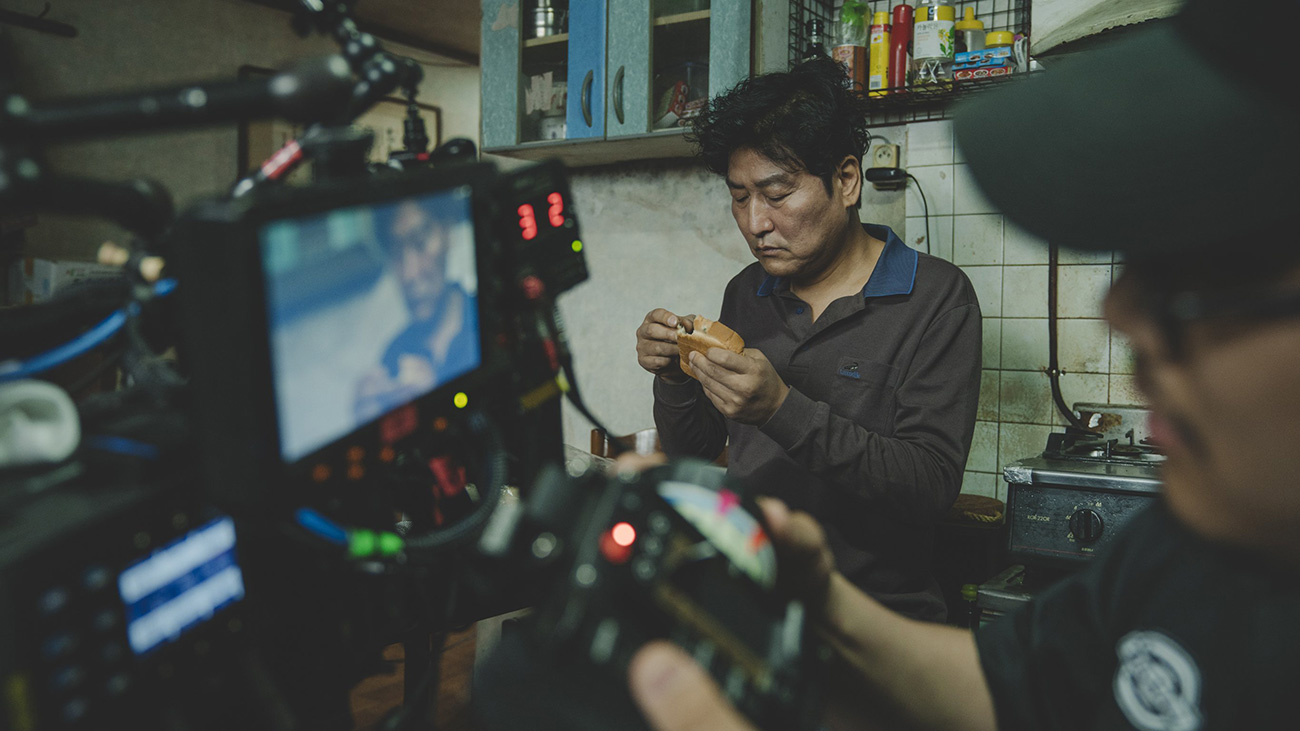 Actor Song Kang-ho in his element during filming.

Shifting genres is not the only familiar feature of Parasite for long-time Bong Joon-ho fans. Parasite also marks the fourth collaboration between the director and renowned actor Song Kang-ho, who previously acted in director Bong’s Memories of Murder, The Host, and Snowpiercer. When asked about his collaborations with Song, director Bong spoke fondly of the actor and how he motivates his filmmaking.

“Song Kang-ho is a great actor, but also he has this power to persuade the audience perfectly,” says Bong. “So when I write my screenplay I always have him in mind – [if] this character is going to be acted by Song Kang-ho, then I feel comfortable. Even when [there are] situations that the audience might think that it’s a bit of a questionable situation…I believe that Song Kang-ho can make it look real, so he makes me write stories that’s more bold and more comfortable.”

‘Bold’ is a fitting word to describe the stories of director Bong’s films. From the genetically-engineered superpig of Okja to the final remnants of society living on a class-segregated train in Snowpiercer, the writer-director is known for using the fantastical to deliver biting real-world social commentary. But unlike his more recent past work, Parasite wraps its social messages in a more grounded story of two families.

“In Snowpiercer, it’s a sci-fi film so I could deliver my message directly and it was a very powerful message,” Bong says. “But [with Parasite], I wanted to approach [it on] a different level, it’s almost as if you look through a microscope and you look at every corner of people’s [lives].”

“In short, you look at the most universal, biggest theme of the world now with the smallest lens.” 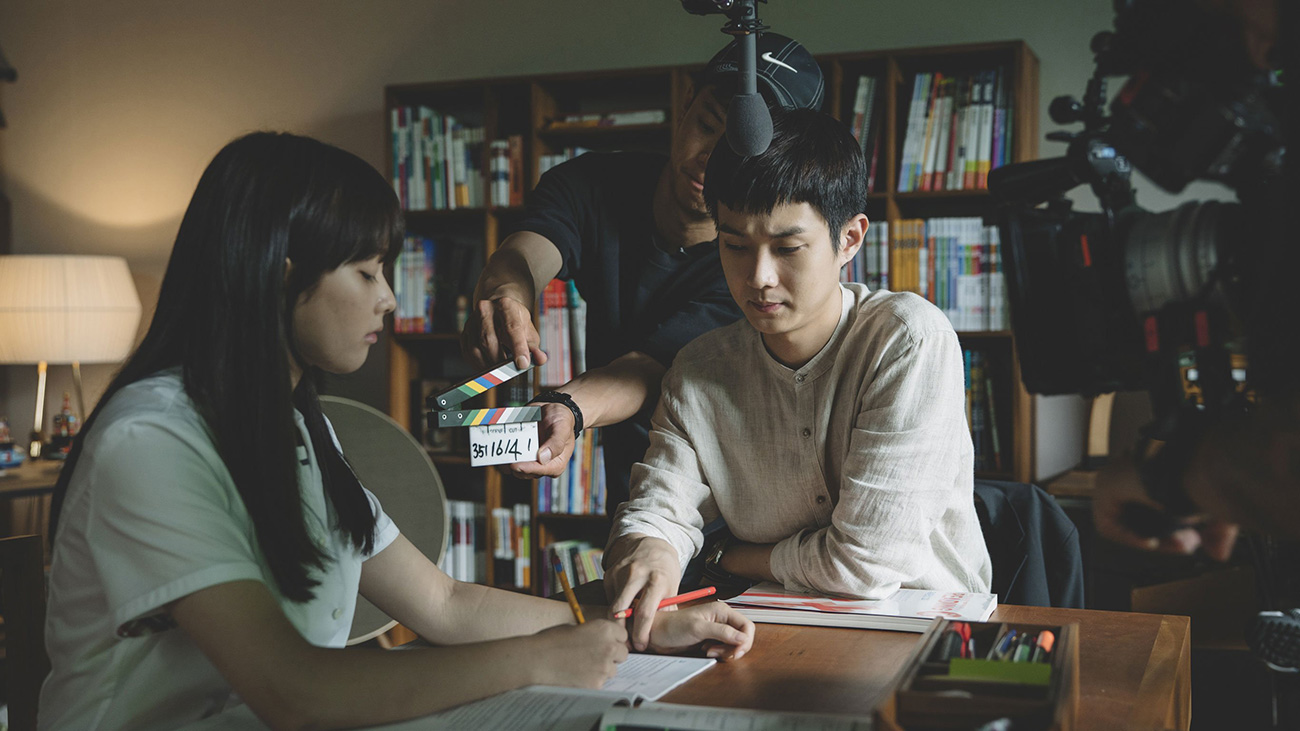 It’s all in the details

The mention of ‘microscope’ by director Bong brings to mind another facet of the director’s reputation – his meticulous attention to detail. In fact, director Bong’s metaphorical and technical precision is so well-known it has spawned its own word in Korean combining his name and ‘detail’: Bongtail (a term which prompts a laugh from director Bong when mentioned).

Parasite too is filled with these tiny details, often steeped in Korean culture. Bong points out the use of a children’s song used for memorisation as one such example, citing a comedic scene where a character is cycling through the details of their fake persona.

“Anyone knows that song in Korea,” director Bong says.

“That song is for school children to make them memorise things easier… but at Cannes, a lot of [the] audience actually laughed at that moment, and they were saying that they had similar songs like that, song[s] of that function to make memorisation easier at school.”

“But you didn’t know about it, did you?” he adds with a laugh.

What audiences might also not know is that Parasite was originally conceived as a theatre script. As to why we are getting it in the cinema as opposed to on the stage, director Bong calls back to that filmmaking instinct which has seen his oeuvre so revered.

“When I was writing the story I thought about a play, but the images and all of that was already in a frame. Maybe it’s because when I was a little boy I used to write, draw cartoons and watch a lot of movies, maybe it’s just in me.”

“I started with the play, but when I finished it… I ended up writing a screenplay. So it just happened very naturally.”

So is a switch in mediums on the cards at all for director Bong? After all, his friend and fellow Korean auteur Park Chan-wook made the transition to television last year with Little Drummer Girl. When asked, director Bong suggests he is not ruling the possibility out, but for now we can keep expecting his works on the big screen.

“TV I’m not so sure, but I know that the Snowpiercer has been made into a TV series and it’s going to be aired next year. I haven’t really [been] deeply involved with that project…they just put me as an executive producer,” says director Bong.

“However, I would like to try a play not in the near future, but probably later on.”

As for what is in the immediate future for director Bong, he is already thinking about his next film. While details are scarce, director Bong revealed to The Hankyoreh that it will be “about a horrific incident that takes place in the middle of Seoul” and that audiences should expect “about the same scale as Parasite” and “a bit of action”. An attendee of director Bong’s post-screening talk at Sydney Film Festival said Bong described the same project as a “horror” film.

Though the current details around his next project may sound vague, they hint at a continuation of director Bong’s storytelling ideals: bold stories borne from social issues and a dexterous control of multiple genres. It is these aspects which have captured the adoration of both critics and audiences for almost two decades. Now with Parasite’s victories at Cannes and Sydney Film Festival (and a prime Academy Awards season release date) Bong Joon-ho’s place in Korean film history looks poised to grow even further.

Parasite releases in select Australian cinemas on June 27 via Madman Films. Filmed in Ether would like to thank Sydney Film Festival, Original Spin, Madman FIlms and translator So-young Greenberg for their part in making this interview happen.