NYAFF 2020 Review: Beneath the Shadow

Friendship can be a fickle thing. Most people tend to not remember how they became good friends with someone, almost as if the catalyst never happened. In the case of Beneath the Shadow’s protagonist Konno (Gô Ayano), his friendship with co-worker Hiasa (Ryûhei Matsuda) begins after he tells him he isn’t allowed to smoke in the building that they work in. Sometimes, it’s as simple as that. Yet this chance encounter between the two men is what begins director Keishi Ohtomo’s quiet and contemplative drama, one that’s shrouded in memory and tragedy. Based on the Akutagawa Prize-winning novella Eiri written by Shinsuke Numata, the film sees the Rurouni Kenshin filmmaker trade up blockbuster action for poetic minimalism in this film that touches on friendship, male bonding, queerness, and the 3/11 Fukushima disaster, with hits and misses.

Set in the director’s hometown of Morioka a couple years before the 3/11 disaster, the film follows introverted Shuichi Konno who works at a pharmaceutical company he’s just transferred to. A solitary and somewhat socially awkward man, Konno goes through his days idly, living alone, tending to his plant. He doesn’t have many friends at his new location, or any that he feels strongly attached to. That is until he meets shaggy haired Norihiko Hiasa (Ryûhei Matsuda). What begins as vague associates at work transitions into friendship after Hiasa shows up to Konno’s home and the two become drinking buddies, and later fly fishing buddies. Hiasa’s personality isn’t a polar opposite of Konno; he’s reserved and seemingly solitary, but in a completely different way to Konno. As their relationship grows, one that skirts the lines between male bonding and romance, Konno grows more outward, smiling and participating in a dance routine at the job.

Then one day Hiasa quits, without a word to Konno, only to turn back up a few months later, clean cut and a door to door salesman. They reconnect, but something’s different. It’s not the same as it used to be; the two quarrel and their fishing expeditions are marred by silence and quiet indifference. A trust is broken, and there’s no going back. “When you look at someone, you should look at the other side, the part where the shadow is deepest,” says a solemn Hiasa. Then before Konno can really grapple with his friend returning and the nature of their friendship, Hiasa leaves again. Then 3/11 occurs, and like so many during that time, Konno begins a desperate search to find out if his friend has died or not, along with learning more about whom this person he called a friend really is. On top of the historical context, it provides a challenging question for our protagonist; if he is alive, then why not tell him, and more importantly, would Konno want to know even if it meant accepting the fact he was left behind? 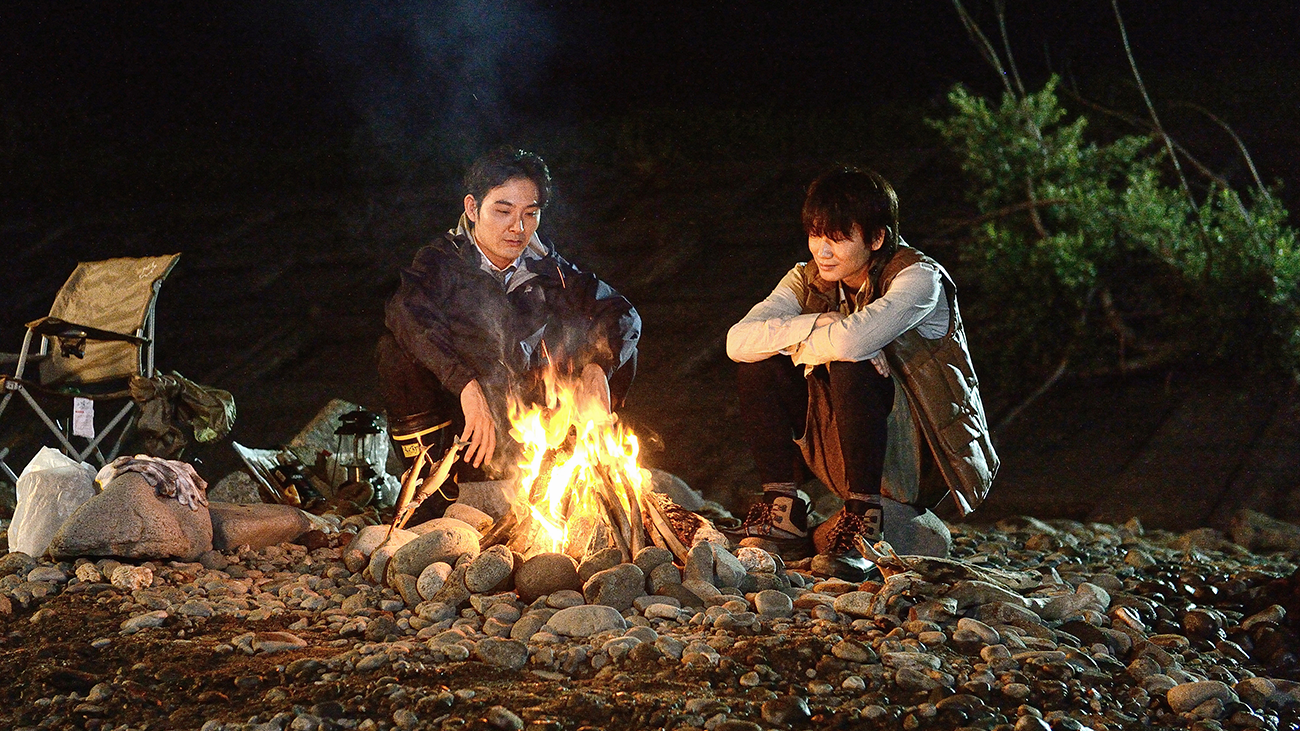 The film has many similar shades to Asako I & II and Burning with regards to the way people attach themselves to our lives only to up and leave. But where those two films gave us characters that enveloped us in their loss and their way of dealing with it (Asako I & II) or a deeply compelling mystery to follow (Burning), Beneath the Shadow stumbles in delivering both, making for a somewhat uneven watch. The real world context of its story helps it, but only by so much. Not for lack of trying mind you as leads Gô Ayano and Ryûhei Matsuda provide great chemistry and their scenes together are a major highlight of this film, especially Matsuda who carries so much intrigue without it overtaking the emotional restraint of Ayano or becoming trite and cliché. Particular praise also has to be handed to Jun Kunimura who plays Hiasa’s father in a scene that’s both heartbreaking and tragic as we come to learn just who Hiasa really is, a scene that tilts everything we’ve come to know. With cinematographer Akiko Ashizawa (To the Ends of the Earth), the film is downright lovely to look at, and director Keishi does his best to keep the film from veering off into boring melodramatics.

Despite this, the film’s second half has a lot of missteps which comes almost directly after Konno reconnects with an old friend Kazuya Soejima, a transwoman played by Tomoya Nakamura, a cis actor. Whatever significance meant to be gathered from this scene, surely meant as a way of establishing Konno’s queer life before his move to Morioka, was lost in that distracting notion, and this reviewer would be remiss if they did not mention it. From there, the film focuses on Konno searching around for Hiasa, looking to see if he’s still alive after the 3/11 disaster and meeting with people who were linked to him. The handling of this particular event is subtle and done with great care. Reporters over at radio station FM Iwate announce the death toll, informing people they also accept faxes pertaining to missing people, and the sunshine aesthetics of the first half give way to gloom. It never feels directly exploitative, nor does it feel simply as set dressing, as each character carries the weight of that event on their shoulders or how they choose to move on. In a scene with Konno and Hiasa’s brother, the two have their conversation while golfers can be seen in the background; in another, cleaners tend to an apartment. In a way, it reminded me of how Spike Lee handled 9/11 with the film 25th Hour, and the way his characters responded to that event through their interactions with one another. 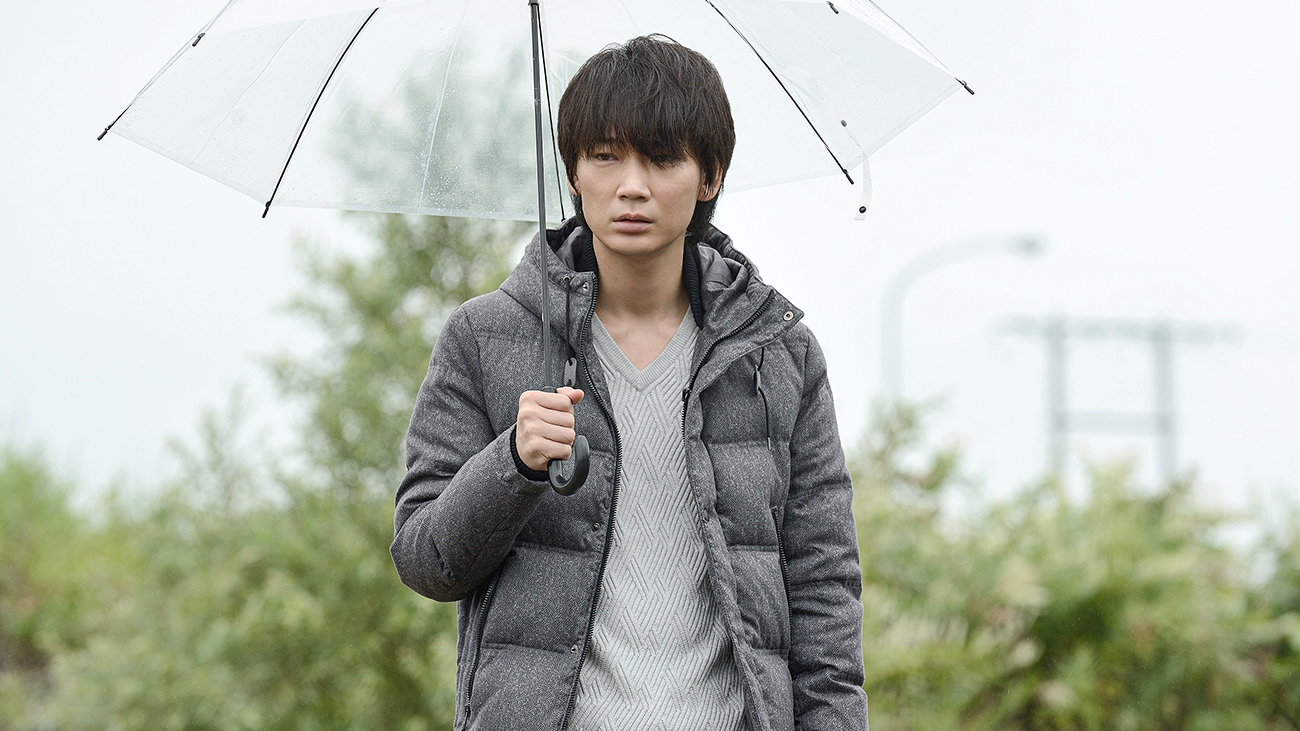 But the film loses steam as it turns repetitious with the way Konno receives information during his search; Konno seated across from someone as they talk about Hiasa, and because of this uninteresting visual approach, a lot of the deep impact from this information, this unraveling of the mystery doesn’t hit with the power it could have. Skillfully acted for sure, but they have a feeling of being inert with all of its energy found in its actors. As we see Konno’s quiet determination to confirm what’s happened to his friend. With each new piece of information that the viewer gets, we see how it wears on our protagonist, watching as his memory and image of this person changes into something entirely unknown. He remarks how he was the “first person I trusted,” after he transferred to Morioka and it’s a moment able to shatter many a heart, mine included. But these moments come few and far between during the last act, as the film slowly crawls to the finish line. Coupled with the fact that the film runs a bit long and it makes for a bit of a dragging experience. It’s disappointing as the film ends up being held back from the great heights it aspires to reach.

“Well, there’s nothing wrong with leaving it a mystery either,” says Matsuda during one of their fishing expeditions, an almost meta-comment on the nature of the film itself, but it never feels like a mystery one particularly needs to figure out, which is a shame because it had a strong start. Despite its shortcomings and disappointments, the film still has its merits and considering this is Keishi Ohtomo’s first foray into art-house dramatic territory, it’s still pretty impressive what he’s able to put together; a well-acted, beautiful to look at, and at times touching movie that falters and stumbles when developing its central mystery.