TJFF 2018 Review: The Night is Short, Walk on Girl

If you’re familiar with the works of Yuasa Masaaki as a director and the adaptations of Morimi Tomihiko’s writings, see also The Tatami Galaxy (2010), then you may have an inkling of what you’ve signed up for.

Yoru wa Mijikashi Arukeyo Otome (The Night Is Short, Walk on Girl—hereby shortened to The Night Is Short) is a hotbed of firework activity that first blinds you with near weightless introductions that flourish into a dazzling display of bright colours and abstraction, breathing new life into visions of Kyoto at night.

Our vehicle of choice, a la protagonist, is very simply named the black haired girl. It is through her that we are taken on a 93 minute joyride of incredible speed and bumpiness, but it never feels like a narrow view of the city that’s constantly out of our grasp. Yuasa is obviously a technician; here is someone who understands that sometimes simplicity is key in delivering the strongest punches. But that’s perhaps only in reference to his art style. The animation and design itself is nothing but. Accompanied by a fun, agile soundtrack and wonky worldviews that can’t help but make you stop and think, the film cracks it open for a fresh gust of wind through your hair. Fans of Yuasa can also keep an eye out for cameos of character designs from past (and maybe even future works) including Ping Pong: The Animation or, most recently, Devilman Crybaby. 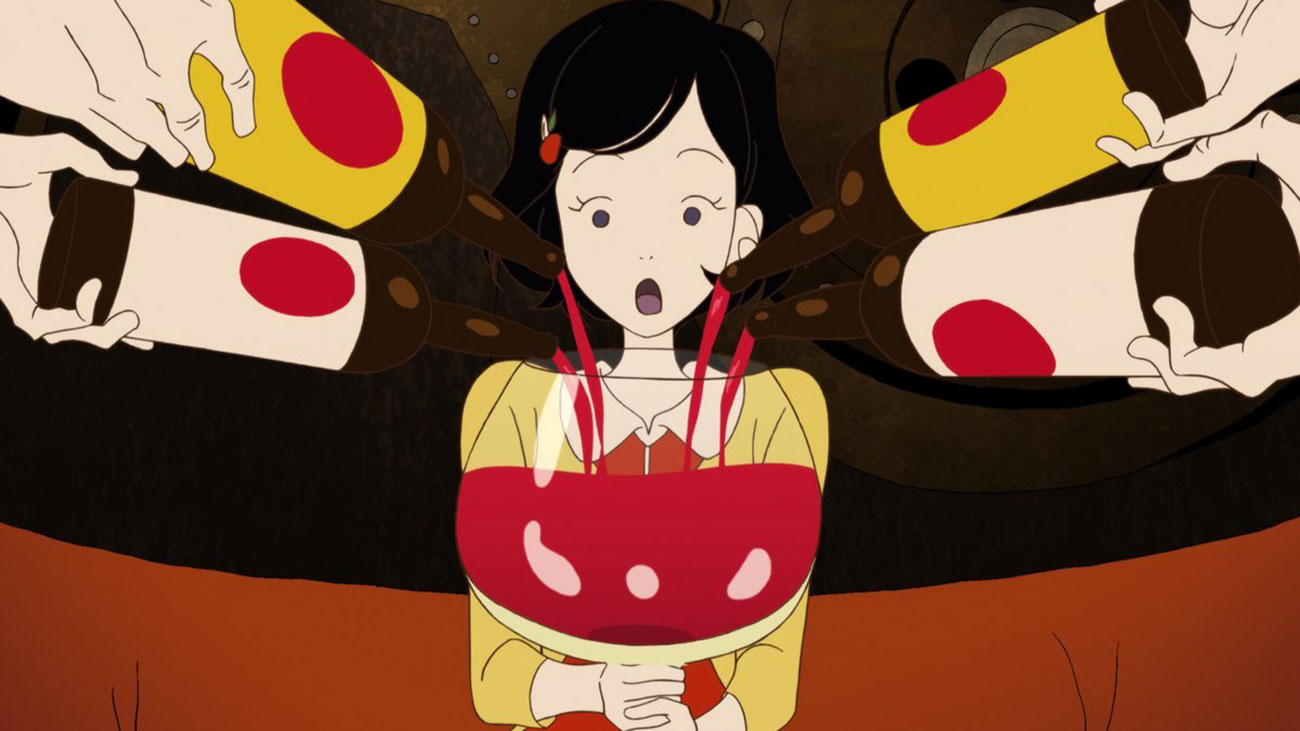 The Night Is Short plays out like a pilgrimage—for love, for happiness, for nostalgia, for the perfect alcoholic drink. Across the night of ironic length, our protagonist introduces us to a myriad of characters as inconsistent as Yuasa and Morimi’s ideas of “traditional plot devices.” Yet everything manages to stay afloat amidst the waves of spectacle squeezed within its brief runtime. They as people dazzle us, after all. Thrown in the mix is also the search for genre as medium: we swing from high school drama (barely!) to screwball comedy, and at some point we entered hyperrealism. And lest it be forgotten, there are also references for intellectuals who may possibly be fans of classic literature, sophism and shunga. There’s no confirmation whatsoever of what we might be looking for, but my god, do we all find something to latch on to.

Despite all the eschewing of norms, Yuasa surprisingly still provides us with a loose three-act structure to follow. It progresses just like the film’s fantastical bar crawl does in the first act: with fresh energy to contemplative inebriation. But unlike the black haired girl, we do not possess a bottomless stomach; the night indeed is short. At some point we lose our senses to the substance. The third act takes a turn into a dark tunnel where nothing can distract from the fact that we’ve had too much. As history has shown us, that’s not always a bad thing. What matters is how you feel the morning after.

Well, how do you feel?