What makes a family?

Is it blood, or can it be chosen? Is it based on love? Financial security? Or even obligation?

These are some of the questions asked by Hirokazu Koreeda’s Shoplifters. The latest family-drama from Koreeda examines the various forms of family and connections we forge between each other. More than just a mere vehicle for its themes, Shoplifters wraps its musings in a compelling, emotionally-rich story of the lower-class Shibatas brought to life through outstanding writing and performances.

Despite struggling with poverty, the endearing Shibata family are immediately strong in both bond and character. The gentle Osamu (Lily Franky) works as a day labourer while shoplifting on the side, while Nobuyo (Sakura Ando) pilfers small trinkets left in clothes at her dry-cleaning job. Along with son Shota (Kairi Jyo) and Nobuyo’s sister Aki (Mayu Matsuoka), the family live together in the cramped confines of grandmother Hatsue’s (Kirin Kiki) home. While returning from a shoplifting mission, Osamu and Shota come across the young Yuri (Miyu Sasaki), who appears to be a victim of abuse. They invite her over for dinner and upon discovering the extent of her mistreatment, decide to informally adopt (or some would say kidnap) the girl. 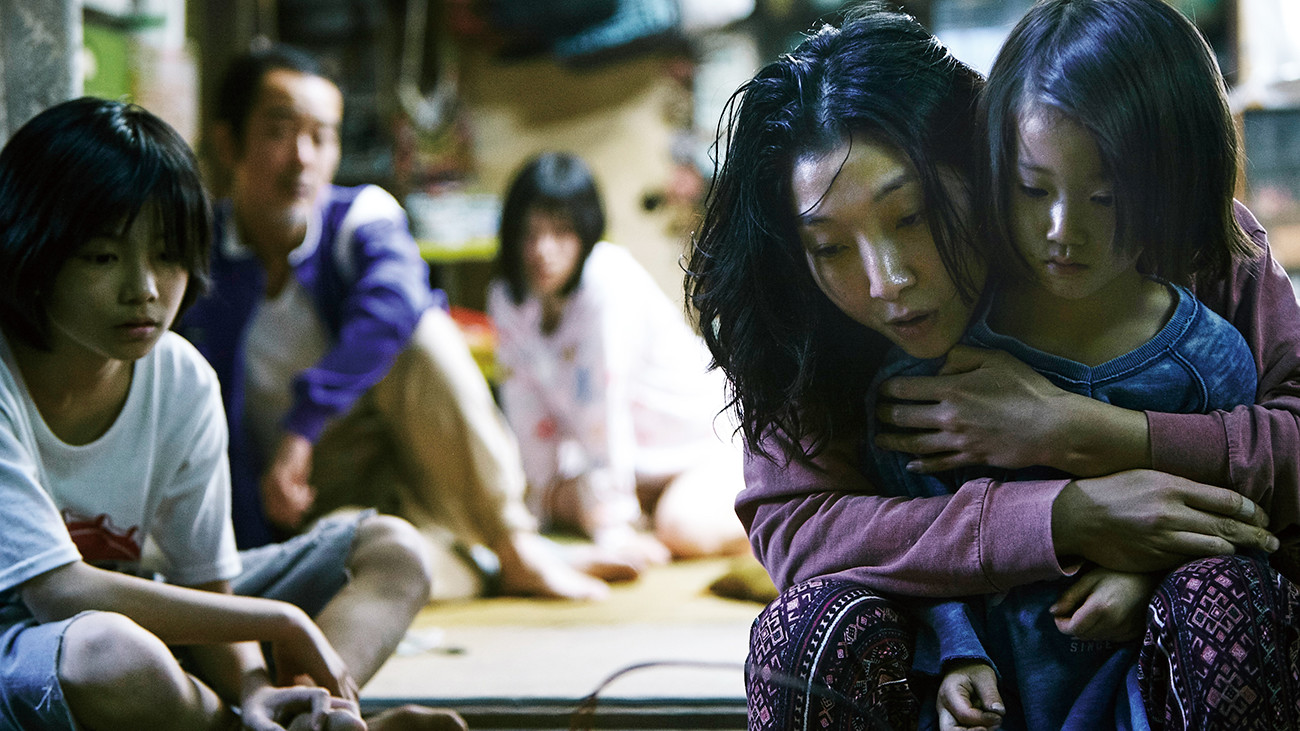 With the Shibata family, Koreeda makes a point of subverting societal expectations that genuine families are only those connected by genes. The assembled crew of the Shibatas seem to be as loving, if not more so, than any ‘real’ family. They are overwhelmingly supportive of each other, with Koreeda’s script wasting no dialogue when it comes to character and relationship development. Every line drip feeds another hint towards each member’s past while developing their close bonds, introducing audiences into the loving embrace of the Shibatas’ close-knit family just as Yuri is.

In contrast, blood families are portrayed much more cynically. This is most obvious with the abuse of Yuri, but also permeates throughout the story of Hatsue, who uses her deceased husband’s family purely for financial support. The duality between deceptive relationships based on economic gain and deeper bonds based on love is consistently apparent, but is nicely summarised by a conversation between Osamu and Aki. Aki (a soft-core stripper whose job brings up questions of identity and the ironically distant intimate relationships promoted by the sex industry), asks Osamu why he has a romantic relationship with Nobuyo. She guesses money, an assumption likely shaped by her occupation, but is shocked when he replies that it is a deeper connection between their hearts. This leads her to contemplate her own relationships with clients, setting off a surprising amount of character development given her relatively short screen-time.

It is simple for characters to be complex on paper or speak of their relationships through dialogue, but it takes great acting for them to feel natural. Thankfully, the cast of Shoplifters not only deliver, they excel. Even in moments where Koreeda’s masterful script is absent, the star-studded cast demonstrate their ability to craft their characters and disappear completely into their roles. These moments range from light-hearted (the comedic hand signals used between Franky and Jyo as they coordinate a shopping centre heist) to heart-breaking (the way Ando silently sinks down when learning of Yuri’s abuse, as though a heavy stone is tying her in place). 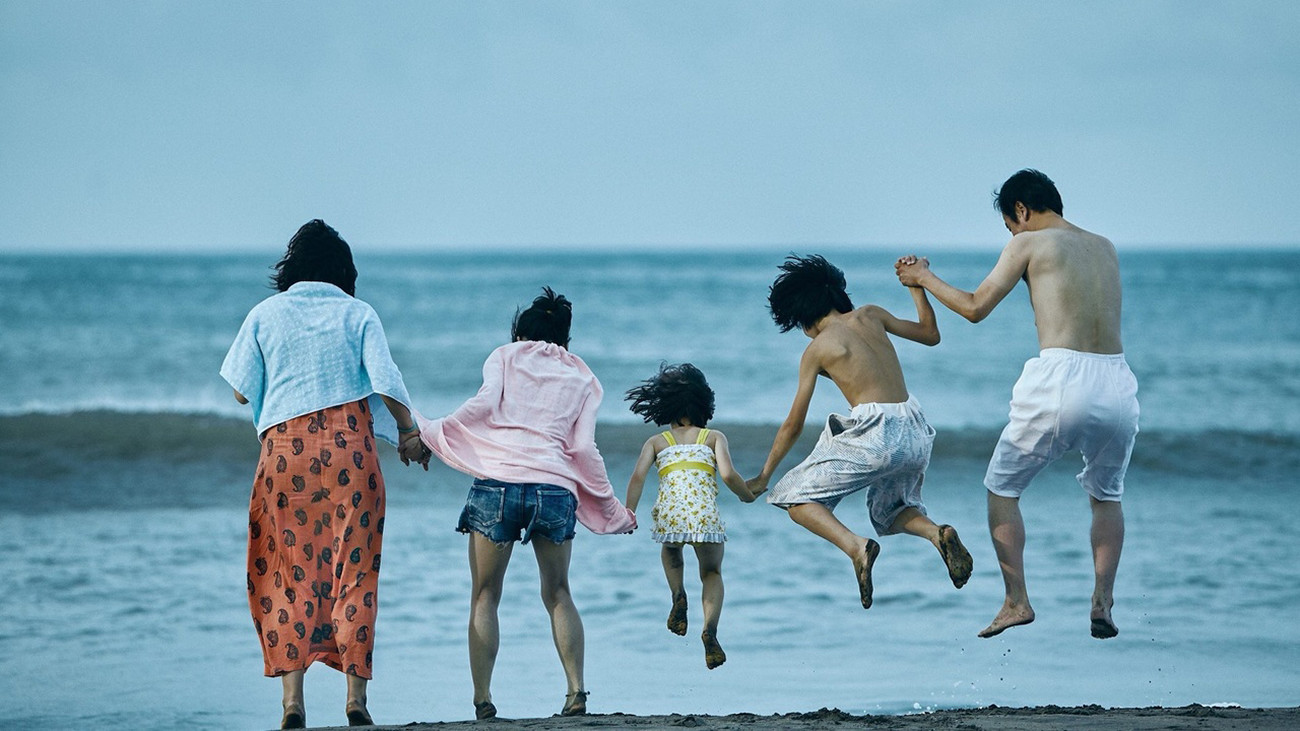 While Shoplifters is an ensemble piece with no weak links (a necessity, given the nuance needed for Koreeda’s script to work), there is one performer who stands out – Sakura Ando. She is effortless in the demanding part of Nobuyo, delivering a stunning performance which convincingly pulls together the ethically conflicting aspects of the character while remaining sympathetic and realistic. Nobuyo is a woman of many roles, but the most compelling is that of a maternal figure deeply affected by Yuri’s abuse, all while maintaining a façade of strength for her surrogate daughter. When she is finally left to confront reality and contemplate her familial role, the ensuring scene of her emotional walls cracking can only be described as devastating. It is a considered moment in which all the subtle layers of Ando’s performance align in a teary, powerful monologue on family, abandonment and belonging. Put simply, Ando’s understated, yet unforgettable, performance and Koreeda’s humanistic writing is a perfect match – hopefully one which brings further collaboration between the two in the future.

By building up these fascinating and likable characters, made all the more believable by an incredible cast, Shoplifters pulls off a shocking final act that if handled by anyone other than family-drama master Koreeda could have easily felt frivolous and superficial. The film’s slice-of-life tone and the Shibatas’ relationships are upended, along with any assumptions and perhaps even trust the audience had of its characters. And yet, despite the morally-dubious truth behind the Shibata clan, it is difficult to feel betrayed by such a dramatic twist. After all, Koreeda provides plenty of subtle clues and never abandons his core messages. In fact, one could argue he strengthens them. Combining the central themes of theft and family (appropriate, given the film’s Japanese title literally translates to Shoplifting Family), Shoplifters’ finale re-poses its central questions with a new outlook and added emphasis on power dynamics, ownership, and selfishness.

So, when all is revealed, ask again: what does family mean? Is it who you are, or who you choose?