The return of a Cannes Film Festival-winning writer-director after eight years. Hope for a deserving adaptation of legendary author Haruki Murakami’s work. A highly-regarded cast including actors Yoo Ah-in and Steven Yeun. All the ingredients of a blazing comeback for Lee Chang-dong with his latest feature Burning (an adaptation of Murakami’s short story Barn Burning) were there. And yet, the end product feels more akin to a gently smoldering fire than a barn ablaze – occasionally creating sparks with its jabs at social inequalities, but overall unable to ignite due to cliche characters and an uninvolving mystery.

While making a delivery in Seoul, Jong-su (Yoo Ah-in) runs into Hae-mi (Jeon Jong-seo), his childhood neighbour in rural Paju. They begin seeing each other regularly, until one day the free-spirited Hae-mi suddenly announces she is going to Africa on a soul-searching mission. While she doesn’t quite find the answers to her existential questions, she does bring back a new companion, the ostentatious Ben (Steven Yeun in his first fully Korean-language role). The source of Ben’s flashy wealth and social status continues to elude Jong-su even as the group of three spend increasing amounts of time together. Following an especially eventful gathering at Jong-su’s farm, Ben makes an unnerving confession that he compulsively burns greenhouses. Soon after Hae-mi disappears, leaving Jong-su suspicious of the mysterious stranger who joined them only months earlier.

Lee’s subtextual additions to Murakami’s slight 20-page story are readily apparent from the opening scene, with the introduction of Hae-mi dripping in gender commentary. Dressed in a tight two-piece outfit while Sistar’s provocatively-titled ‘Touch My Body’ plays in the background, Hae-mi asks Jong-su if she’s pretty now that she has had plastic surgery. Just in case the message of gender inequality still isn’t obvious, Lee makes his point even more explicit with an exchange between Jong-su and Hae-mi’s former co-worker, wherein Korea is described as “no country for women”. Thankfully, there are some powerful moments of discrete commentary which successfully combine character and gender. Most notably is a silhouetted scene of Hae-mi dancing naked against the sunset. Calling upon her earlier story of African bushmen dancing at nightfall as they face the “Great Hunger” for life’s purpose, Hae-mi is literally and figuratively exposed – outwardly sexual and contemplative of her place in the world, all while being voyeured by her two male companions. 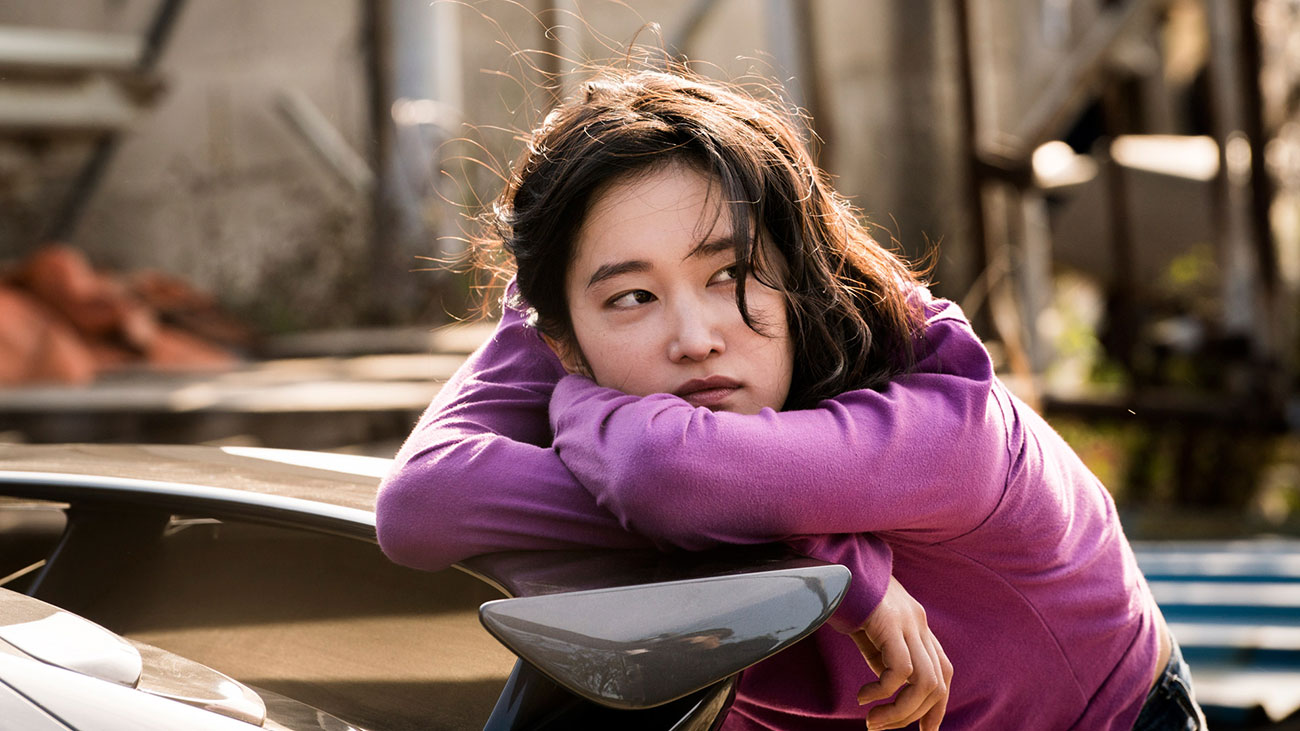 However, to pigeonhole her character as a mere object of desire for surrounding men is to be mistaken. Hae-mi also appears in control and confident of her sexuality, independence, and even insecurities. She is an intricate and intriguing character brought to life by a captivating performance by newcomer Jeon. One emotional drunken dinner scene reminiscent of Hong Sang-soo shows the incredible breadth of Jeon’s potential, not just rivaling but outshining her big name co-stars.

Unfortunately, the same depth of writing and performance cannot be said of Steven Yeun’s Ben, around which the film’s third act revolves. Ben’s first impression is admittedly strong – his ego and questionable affluence on full-display. But soon enough the mysterious stranger archetype wears thin, with Lee rarely expanding or subverting the character conventions Ben strongly evokes. Furthermore, Yeun’s performance leaves something to be desired, not quite pulling off his suave character with the confidence required. There is an element of playful self-awareness to it all though, with Jong-su (whose own character feels forcefully developed with a tacked-on family sub-plot) calling Ben a “Great Gatsby”. Regardless of intention, once the most-interesting character of Hae-mi disappears all that remains are two comparatively two-dimensional characters, the kind audiences have previously seen in Korean thrillers.

This leads directly to Burning’s most glaring failure – a mystery without, well, mystery. The resolution of the film is foreseeable from as early as the halfway point, making any later reveals or ‘twists’ fall spectacularly flat. Once it finally attempts to throw its inevitable curveballs, they’re ineffective and create little reason for audiences to question their (likely correct) conclusions. Even the film’s central metaphor (burning greenhouses) is far too obvious, representing a perfect intersection of Lee’s heavy-handed approach to social commentary, character, and narrative. Although one could argue that the combination of Ben’s overtly suspicious character and Lee’s conspicuous plot sign-posting are sufficient in raising the stakes, the film’s latter half drags on far too long to sustain any tension it may initially create. 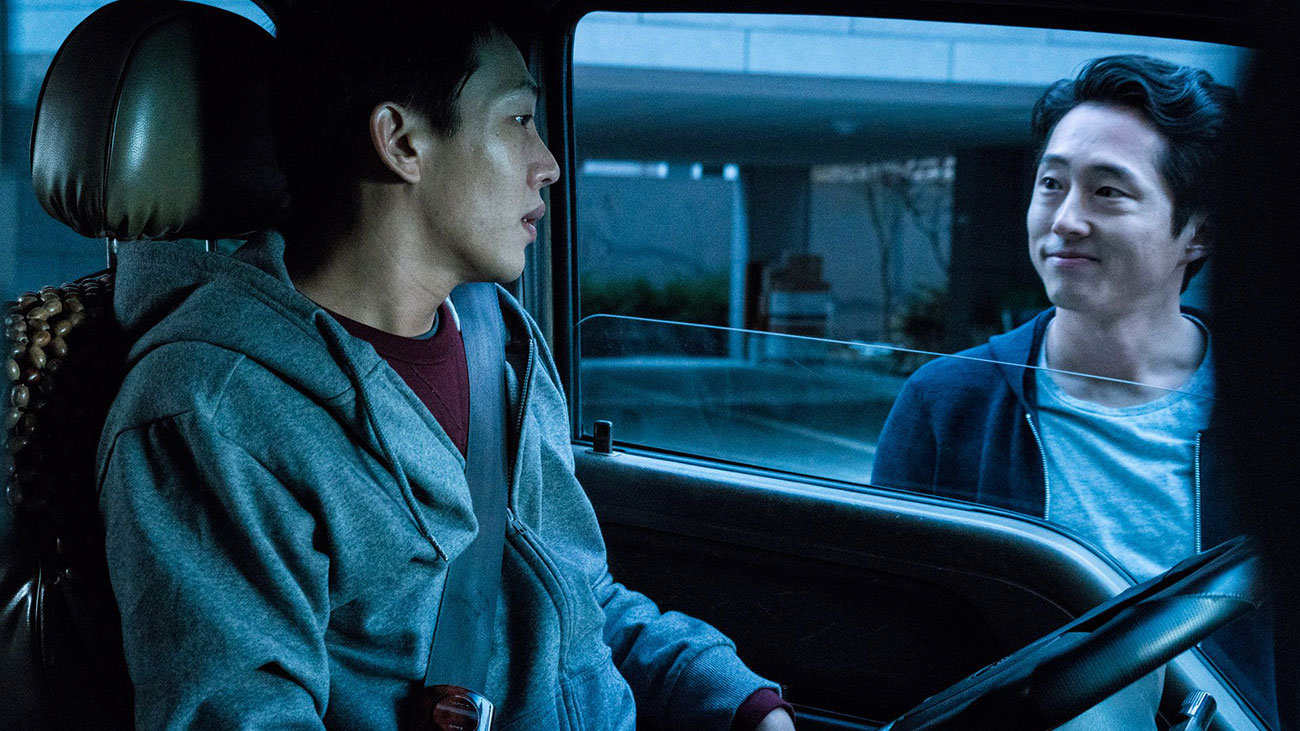 However, this isn’t to say the film is completely devoid of any subtlety or intrigue. Hong Kyung-pyo’s (Mother, The Wailing) widescreen cinematography achieves both. The marginalisation of Korea’s lower class is posited through clever and varied framework. A long shot emphasising the tiny scale of Hae-mi’s apartment relative to the sprawling buildings of Seoul is particularly poignant, although a more understated handheld close-up of the tiny sole patch of sunshine in her room conveys a similar message. Meanwhile, the vast rural landscapes of Jong-su’s hometown are often bathed in a misty blue darkness, conjuring an ominous, hazy atmosphere. Hong’s moody imagery is underscored by a standout soundtrack from Mowg (I Saw the Devil), its ostinating acoustic guitars punctuated by sonorous bass notes creating an anxious pulse throughout.

While Lee’s adaptation certainly brings much to the original source material in the way of commentary and mood, its tame narrative ambitions display unexploited potential. Given the slow and considered storytelling and subtle characterisation of Lee’s previous works like Poetry, it’s truly disappointing that Burning sticks so close to both character and genre tropes in its latter half. Just as Jong-su goes from greenhouse to greenhouse searching for the elusive remains of a burnt building, I have to wonder if there is something I too am missing – is there a deeper purpose to Burning’s seemingly pedestrian mystery, or is this really all there is?