“As I wrote the outline for my first fiction film idea with the title ‘The tree shadows in the wind’ in 2007, I told myself whether it is a documentary or a fiction film, you should always try to make them this: poetic, humorous and dramatic.” These are the words from director, producer and writer Xu Hongjie from his interview with Cinema Without Borders on his latest and first documentary film, On the Rim of the Sky.

High up in the mountains of China’s Sichuan province enshrouded by clouds you will find the quietly isolated Gulu village. It’s a village that has had no contact with the outside world until a trail was built in 2004, which only furthered media attention towards it in 2008 when journalists started coming and going after the major Sichuan earthquake.

Xu Hongjie’s fiction film documentary, On the Rim of the Sky puts its focuses on Gulu village and its only primary school. Teacher Shen has been teaching for more than 27 years despite not holding a college certificate that legally recognises his role as a substitute teacher. Due to his lack of degree, a cloud of uncertainty hovers over Shen who wonders how long he’ll be able to hold onto his teaching job. Enter Teacher Bao, an idealistic educator who is nicknamed “Don Quixote on the mountain” and teaches alongside Shen. The young Che Guevara fanatic volunteer teacher arrives in Gulu from cosmopolitan Wuhan and already has ideas to make changes that not only affect the primary school the future of its children.

On the Rim of the Sky follows these two teachers as they both try to deal with each other’s different ideals with regards to how children should be taught. A case of experience versus education, as an outsider looking in you can’t help but shake your head in despair at both teachers’ situations especially when it spirals out of control the more you watch.

The film tracks the complicated situation within Gulu’s primary school from beginning to end and thankfully ties up all loose ends by revisiting the village ten months after the ending of the resolved situation. We see the extent of this conclusion’s impact had not only on the school but also with teachers Shen and Bao. Xu Hongjie then revisits the village 23 months following this and it isn’t at all surprising to see that that a lot has changed in that long period of time since the film was made (production is said to have begun in 2009). 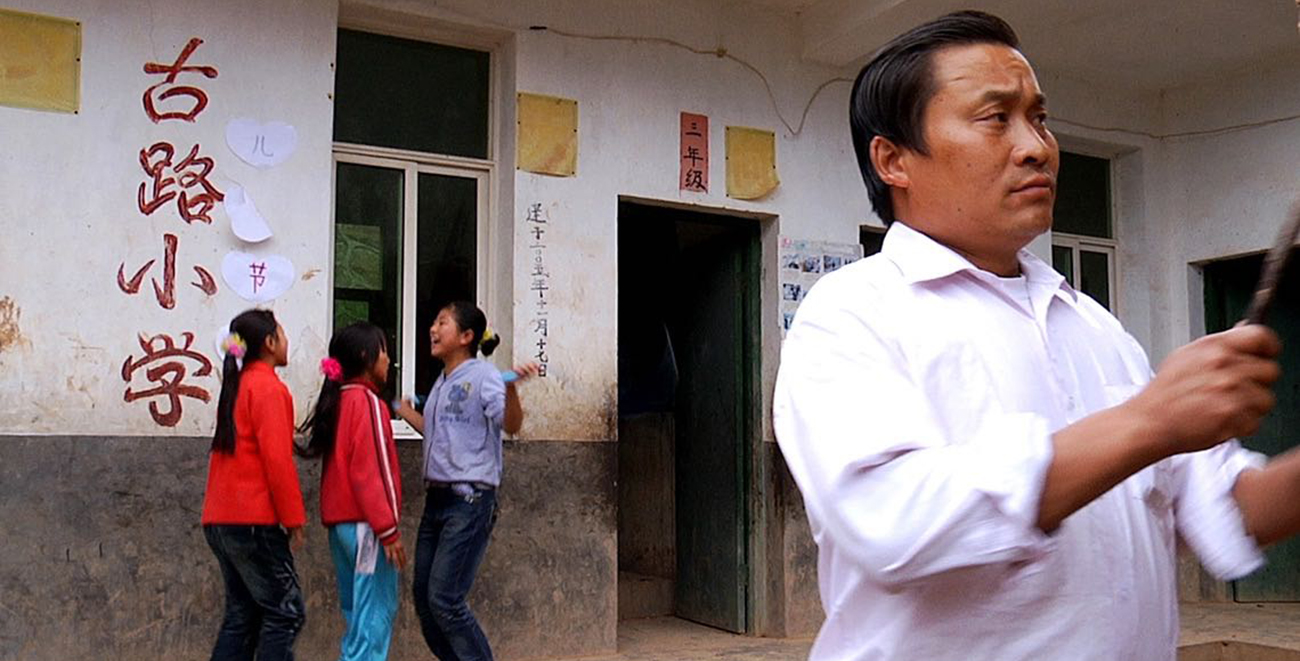 The poetic details that Xu adds to his documentary must be commended. Metaphorical touches of nature to describe situations – like a shot of a cat fight while a voiceover of Teacher Shen explaining why he is always shut down by volunteer teachers despite wanting to share his teaching experience with them – bolster the film’s strengths. Having this film put together to look like both a documentary and fictitious feature is enough to hold viewers’ attention – the realness of the situation in Gulu village is never overpowered by constant interviews.

It will be intriguing to see what else director Xu Hongjie has up his sleeves for future films, especially if he continues with his unique documentary-fiction film style. It seems from his interview with Cinema without Borders that his ideas will continue to sprout until he feels he has reached the core of defining ‘The tree shadows in the wind’ across his films. Whatever ideas that Xu Hongjie has next, I can’t wait to learn more of what he wants to show to the world.