From George A. Romero’s criticism of American consumerism in Dawn of the Dead (1978) to Shaun of the Dead’s (2004) comparison of the British middle class to the brainless, shuffling undead, zombie films have long stood as allegories for contemporary issues. While Train to Busan is a first in many respects, being South Korea’s first zombie blockbuster and breaking domestic first-day box office records, it still follows its Western precursors when it comes to intertwining social commentary with gore and scares. While it does little new with the zombie genre, Train to Busan’s offering of thrills, emotion, and timely criticism of society’s obsession with competition makes it easy to understand why domestic and international audiences are flocking to see it.

Divorced father Seok-woo (Gong Yoo) struggles to balance the demands of his work life with the needs of his daughter Su-an (Kim Su-an). In an effort to apologise for his absence, Seok-woo promises to accompany Su-an on the KTX to Busan to see her mother. Also aboard the train are parents-to-be Seong-kyeong (Jung Yu-mi) and Sung-hwa (Ma Dong-seok), teenage lovers Jin-hee (An So-hee) and Yeong-guk (Choi Woo-sik), and corporate manager Yeong-seok (Kim Eui-seong). When a zombie-creating virus rapidly infects most of the train, the remaining passengers must battle for survival until they reach the military-secured Busan. 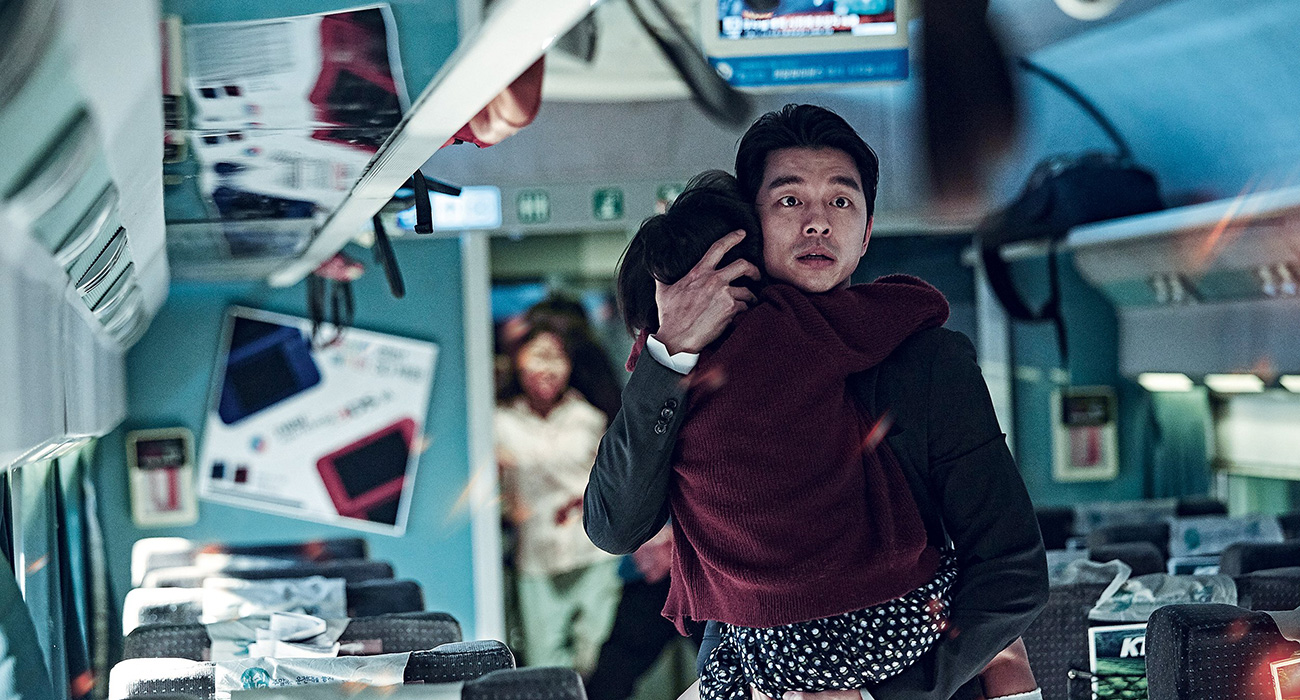 Although its enclosed train setting is original and exciting for a zombie film, Train to Busan continues to embrace the genre’s tradition of commentary, with the film’s topical criticism of society featuring prominently throughout. The film turns the zombie genre’s themes of survival and distrust into a metaphor for Korea’s hyper-competitive society. The aforementioned characterisation of Yong-seok, whose selfish actions regularly evoke a ‘dog eat dog’ mentality, suggests that director Yeon Sang-ho and writer Park Joo-suk condemn this widely-accepted feature of modern life. However, they are also unafraid to admit that conforming to this mentality is necessary for survival in the hypercompetitive nation, as repeated several times by Seok-woo.

Similarly, Train to Busan’s larger story beats and characterisation suffer from a dependency on well-worn action and horror cliches, resulting in predictability. While to discuss these tropes could spoil some of the film’s turning points, their effects are encapsulated by the ultimately shallow character of Yong-seok. Overwhelmingly one-note and almost cartoonishly villainous, Park’s script gives Kim little to work with. A last-minute attempt to justify his actions and perhaps elicit sympathy from the audience feels rushed and clumsy, with Kim tasked to develop his character through just a few lines of jarringly exposition-heavy dialogue. 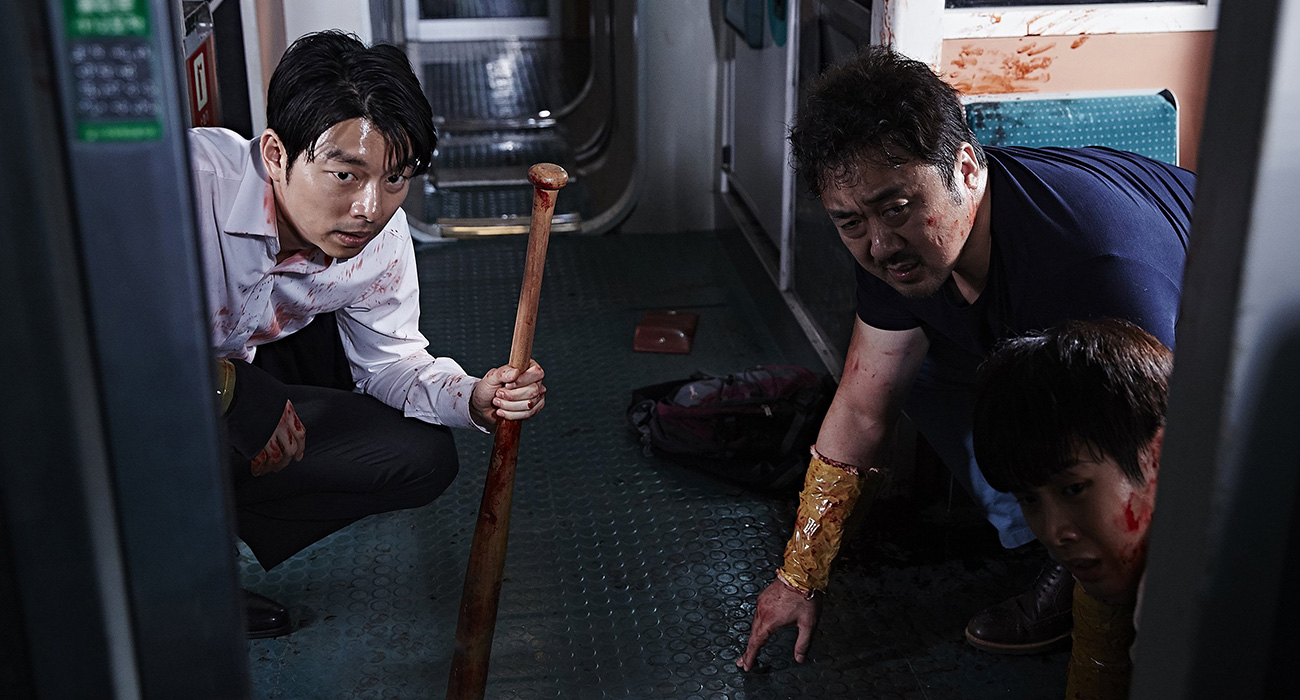 When it comes to the remaining passengers, thankfully Park and director Yeon are able to divide screen time and provide proper, gradual development for everyone. Main protagonist Seok-woo’s character arc from a workaholic unable to connect with his daughter to a protective father is compelling, in large part due to the strength of Gong’s chemistry with the captivating and versatile child actress Kim. The standout, however, is Ma as Sang-hwa. Ma delicately balances the various aspects of his character. His transition from trepidatious and distrustful towards Seok-woo to a loyal ally feels natural rather than a sudden change to service the plot. While Jung, spends much of her screen time in tearful fear, the subtlety of her facial emotions and physical performance, especially when interacting with the young Kim, saves her performance from veering in the same monotonous territory as the villain.

The ever present threat of both humans and the infected is emphasised by the appropriately escalating pace of Train to Busan. In an opening scene highly reminiscent of the beginning moments of Bong Joon-ho’s The Host (2006), a truck driver convinces a surgical masked guard to pass through following a chemical spill. The short sequence effectively establishes the government’s knowledge of the virus and the zombifying effects without relying on over-explanatory dialogue or, a trend in modern apocalyptic films, news montages. 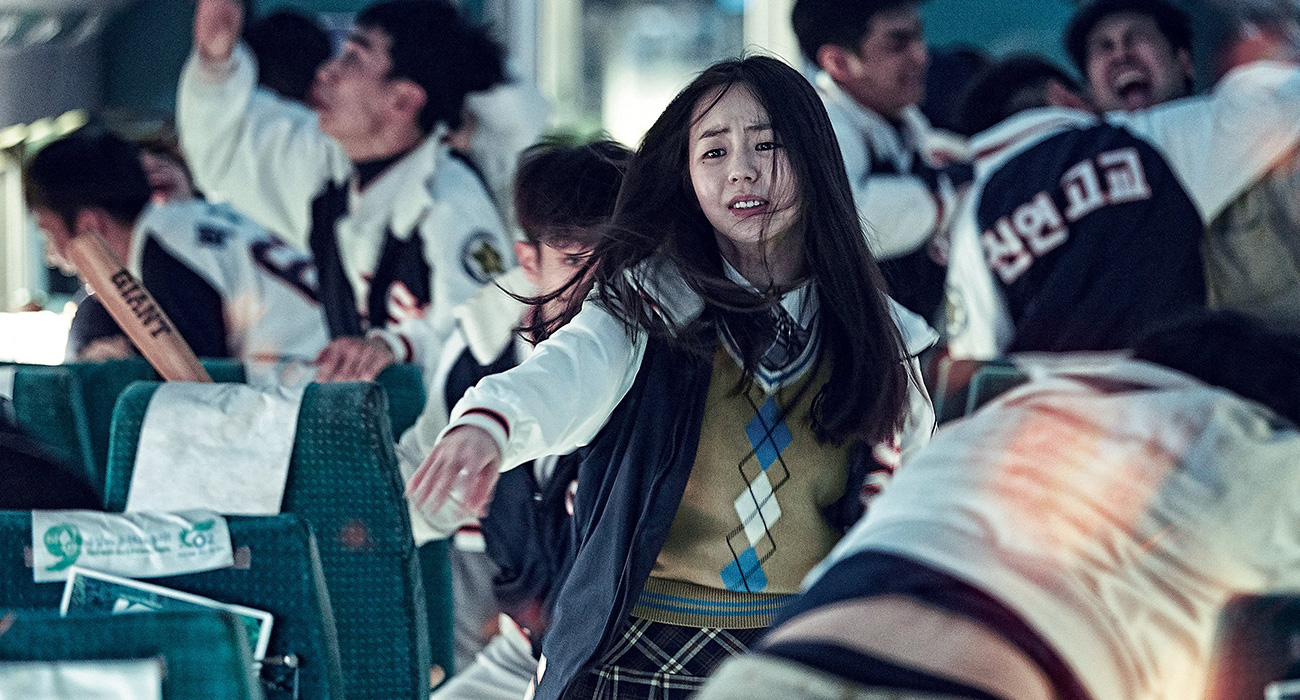 Train to Busan’s entire two hour runtime is just as efficient. Due to its setting, characters are rarely alone, and hence each moment builds their relationships in addition to action, drama, or scares. Large CG set pieces, multiple twists, and a zombie count verging on ridiculous, may make the film’s relentless third act feel tiresome for some yet despite this, Train to Busan never forgets its firm grounding in the human condition. The emotion of the film’s closing moments feel earned due to the careful building of character relationships and excellent acting by the main cast.

As South Korea’s first major foray in the zombie genre, Train to Busan is a valiant effort which combines scares and emotion into a highly entertaining and socially-conscious film. However, much like the flesh-eating monsters that terrorise the titular train’s passengers, the film tends to stumble at times. Some lacking characterisation, an overreliance on horror tropes, and a divisive third act holds Train to Busan back from becoming an instant genre classic.