Review: The Tale of the Princess Kaguya

But if you allow yourself to be swept up into the minimalist watercolor and charcoal design of the film, you will find a tale that’s wondrously alive. It’s the kind of animated feature that Hollywood can only dream of creating – stories out of animation that are this timeless and universal.

The story starts with a humble bamboo cutter named Okina (“Old Man”) chancing upon a glowing stalk in the bamboo grove near his home. Cutting away at it, a tiny doll-like girl, no bigger than his palm, is revealed. When he brings her home to his wife Ouna (“Old Woman”), the tiny girl transforms into a very much real baby girl who grows at an accelerated rate. Her childhood is spent frolicking with the village children and being surrounded by nature. However, when Okina discovers more glowing bamboo shoots that reveal gold and expensive silks, he is convinced that his daughter is destined for a life greater than simply “being a village girl”. In a flash, she is whisked away to the capital, a bustling city that’s a far cry from the forests she ran freely in with her friends. Initially, she is blown away by the grandeur of the palace that Okina has brought her to live in, and the material luxuries showered on her. When he brings Lady Sagami to tutor her in the ways of being a “true princess” though, the story takes on a much darker tone; one that examines the place of women in society.

“Even a princess must sweat, laugh, get angry and cry,” Kaguya cries out as Lady Sagami insists to her that she must conform to the beauty standards of the noblewomen, that a true lady never shows her feelings. The film examines the way women are objectified and confined by the patriarchal structures that dictate society. Takahata is never heavy-handed with these themes, rather, he handles his protagonist and her story with infinite care and respect. Kaguya, crafted out of seeming charcoal and ink, comes across as three-dimensional and expressive as any flesh and blood character on screen. Even the title of the film lends itself to being feminist in nature by reclaiming the original folklore title. ‘The Tale of the Bamboo Cutter’ is renamed The Tale of the Princess Kaguya because this story is about Kaguya. 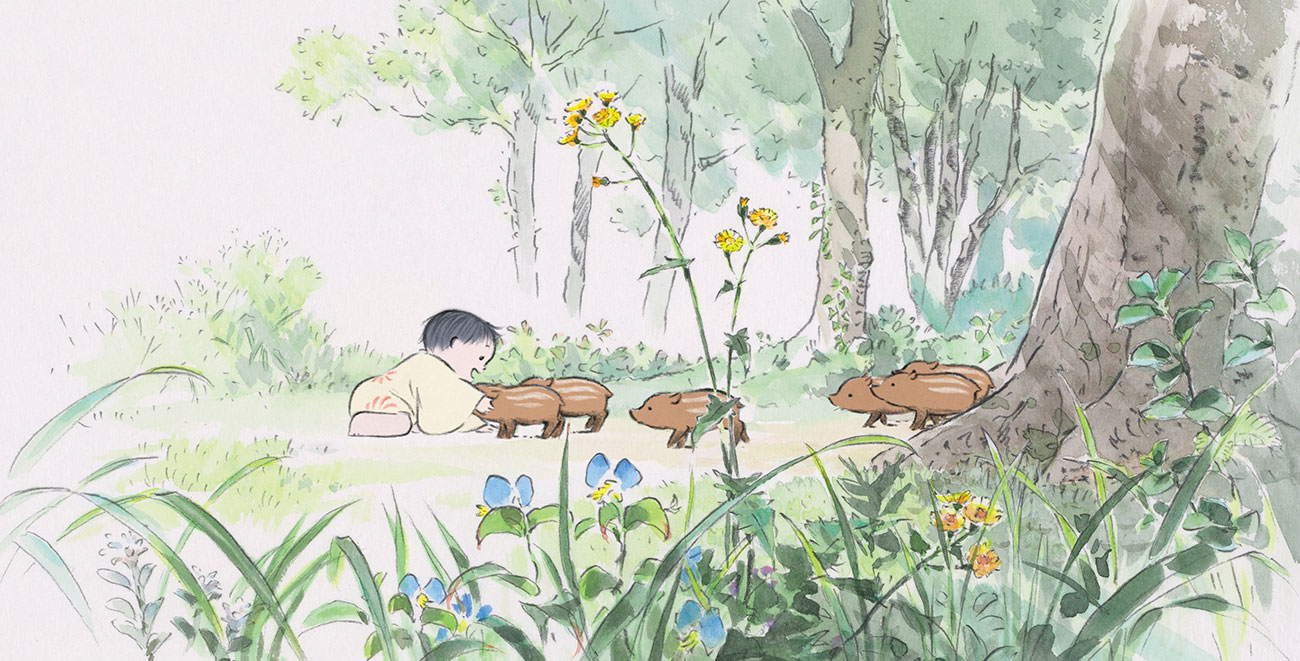 The film’s central conflict is grounded in Kaguya’s desire to live on her own terms where she longs to return to the pastoral paradise of her childhood home and be reunited with her friends and childhood sweetheart Sutemuru. At the same time, it also recognizes the filial duty she has to her parents that therefore bind her to societal conventions. Okina, like all parents, only wants the best for Kaugya, and cannot see past his own folly. Kaguya, in honoring her father, sacrifices her freedom for a place in a gilded cage. These are themes that are instantly relatable to anyone that has been a parent or child.

The only shortcomings of the film are that in trying to juggle so many themes, some end up being insufficiently explored. Kaguya’s relationship with her parents of the story is initially the focus, but when it shifts to the disdain she has for her wealthy suitors, that relationship becomes neglected until the end. Both Okina and Ouna’s characters also lack depth, and Ouna is particularly opaque as a character outside of her relationship with Kaguya.

Ultimately, the animation and artwork in this film is breathtaking. In one of the film’s best scenes, Kaguya flees from the palace; her fury and anguish depicted with raw expression. It’s a powerful moment as the background around her dissolves into an expressionistic whirl of black and white; her figure, a red blot, fluttering through at top speed among the snowy hills and the rush of the trees.

The Tale of the Princess Kaguya can rightfully claim itself to be easily the best animated film of 2014, of the past ten years and will likely find itself to be one of Studio Ghibli’s crowning jewels – a feat itself considering the legendary output of the studio. When people talk about cinema being art, this is what they mean.