While this review does not contain narrative spoilers for Parasite, other elements of the last act are discussed.

Going into Parasite, writer-director Bong Joon-ho’s first Korean film in a decade, it was difficult to know what to expect from the versatile filmmaker. The announcement of the title had many suspecting a science-fiction film in the vein of his recent works Snowpiercer or Okja. Meanwhile, its curious international trailer declared the film a ‘tragicomedy’ despite a dark, thriller tone evocative of Mother. In reality, Parasite is not just any one of these suppositions. Instead, one can feel the DNA of Bong’s acclaimed filmography throughout every aspect. Wild tonal changes, rambunctious set-pieces, intricate social commentary and engaging characters — it’s all here in one, thrilling crowd-pleasing package fit for both long-time Bong fans and curious newcomers.

Given that description, Parasite’s premise might sound unexpectedly simple. Struggling to make do as pizza box folders, the underemployed Kim family con their way into working for the affluent Park family. As the Kim family begins to integrate themselves more into the Parks’ lives, a shocking incident sends their well-laid plans into disarray.

Parasite is a welcome return to a focus on the family unit for Bong, bringing back the intimate storytelling of his smaller Korean films. With the film never straying from the two families, the audience gains an understanding of each member thanks to a winning combination of playful dialogue, unique characterisation and top-notch acting. 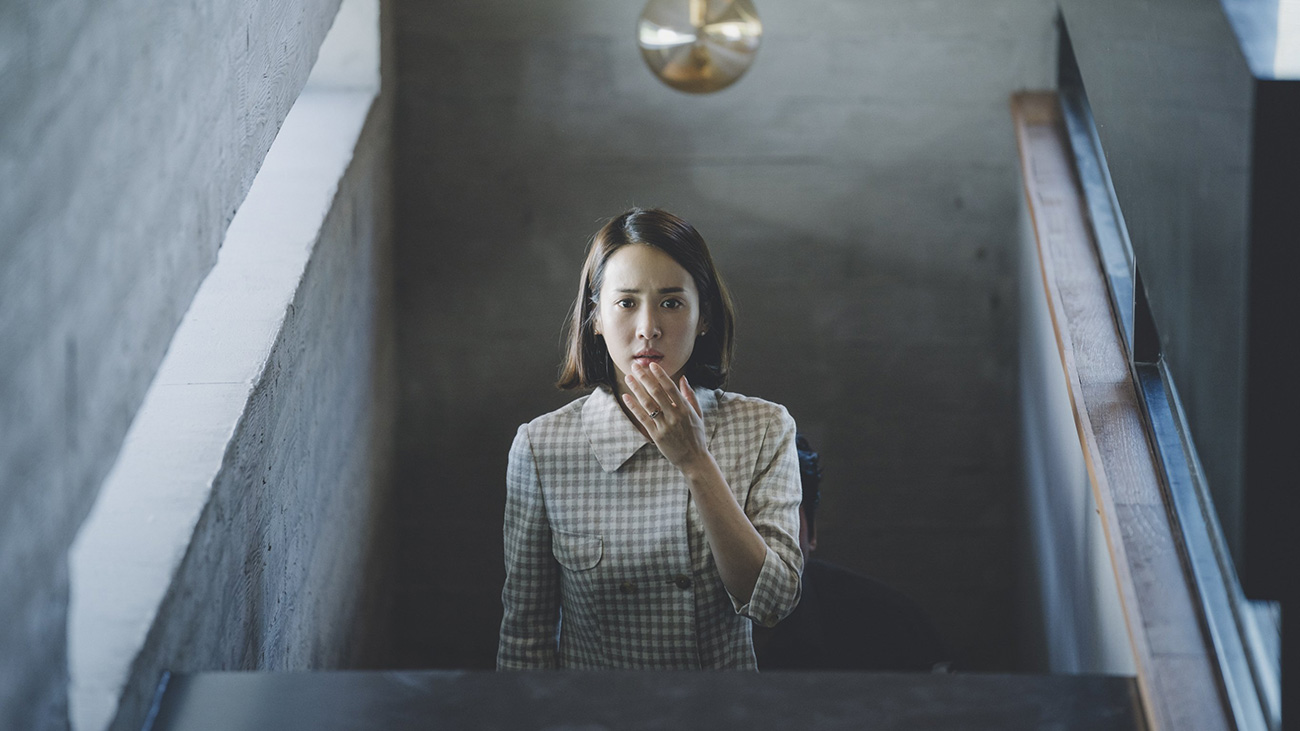 The blissful marriage between these elements come most surprising in the form of Park matriarch Yeon-kyo (Jo Yeo-jeong). Her bubbly and naive personality is a radical departure from Bong’s usual head-strong, independent female characters (though don’t despair, Park So-dam as the cunning daughter of the Kim family has this more than covered). Jo clearly has fun with her playful role, ratcheting up the entertainment factor with an infectiously energetic performance.

Meanwhile, the Kim family is more familiar ground for Bong, with each member getting their turn to show off their eccentric personalities. Choi woo-sik and Song Kang-ho in particular deliver a one-two punch as the central father-son duo. Both patriarch Ki-taek (Song, as brilliant as ever) and son Ki-woo (Choi) start as lovable underdogs whose oddities are comically endearing. In one early moment, Ki-woo’s declaration that a gift rock is “metaphorical” (perhaps a nod to writer-director Bong’s reputation for symbolism) earned plenty of laughs in-theatre thanks to Choi’s delivery. Similarly, a passionate dinner grace praising the “bountiful wi-fi” by Song’s character delightfully pokes fun at modern reliance on the internet.

But even as Parasite switches gears and Ki-woo and Ki-taek’s increasingly morally-grey actions test their likability as characters, they never become entirely unsympathetic. This is a testament to co-writers Bong and Han Jin-won, whose screenplay rationalises (but does not fully admonish) these characters’ actions, as well as Choi and Song’s convincing performances. As Bong noted in our interview, Song has the “power to persuade the audience perfectly” and make even the most questionable situations feel “real” — and Parasite might just be the best example of this yet.

Production design is just as important as the characters in Parasite, as 90 per cent of the film occurs inside the two families’ homes. In reinforcing its themes of social inequality, director Bong’s literal and figurative use of stairs in the Park household is most obvious; representing everything from financial mobility to the naivety of the rich. But even outside of individual symbols, the verticality and expanse of the Parks’ home is telling in itself, enhanced further by the wide-framing and use of space by cinematographer Hong Gyeong-pyo (Mother, Burning). 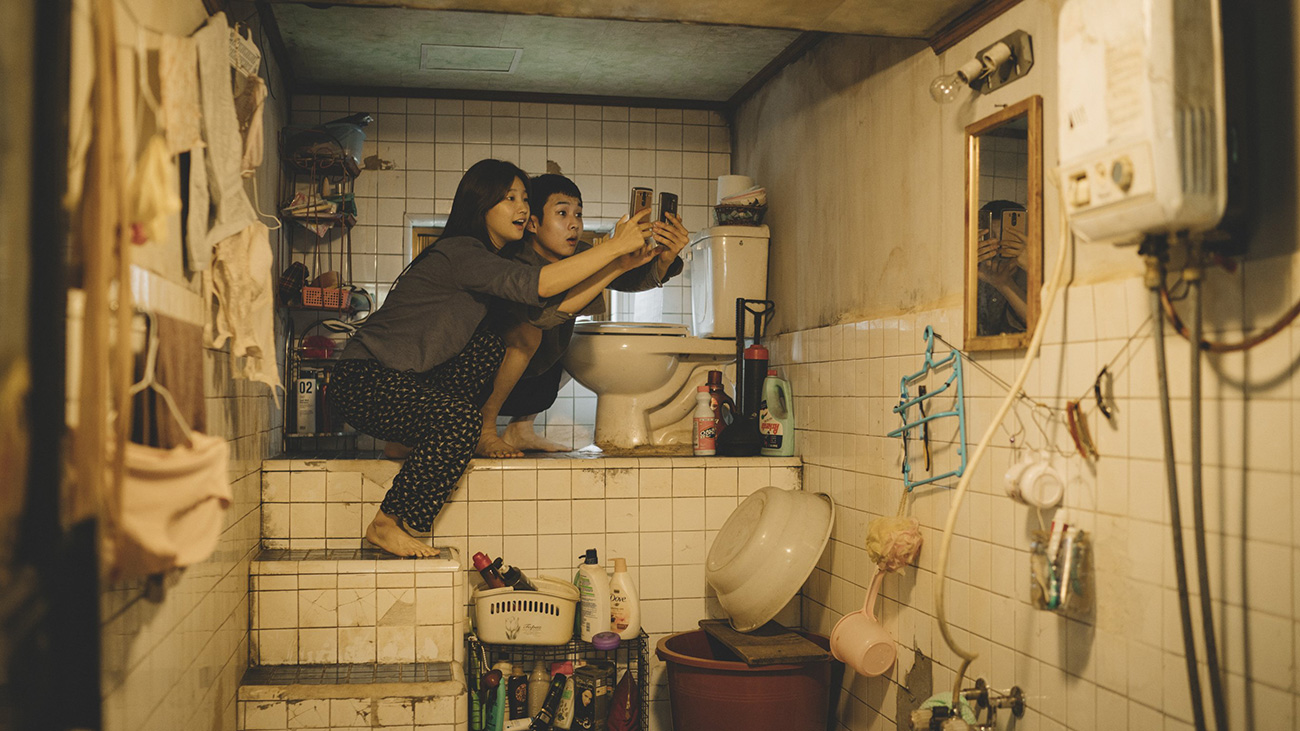 Meanwhile, in another technical display of Parasite’s themes of polarity, the Kims’ semi-basement home is shot in much closer quarters. The Kims are physically crowded into the same frame more often, and their view of the street from a dusty, ground-level window stands in stark contrast to the wall-length glass windows which open onto the Parks’ vast yard. Even when the Kims fake their way into the Park home these contrasts persist. Relatively closer shots of the Kims not only provide a visual extension to Parasite’s more on-the-nose metaphors of class stigmatisation, but also allow the family’s chemistry to shine through excellent ensemble staging when all inhabiting one frame.

Despite the smaller scale afforded by these limited locations and characters, don’t be mistaken in thinking Parasite is a return to the more grounded tone of Bong’s earliest works. In fact, Parasite contains some of Bong’s most palpable moments of genre whiplash to date. Thankfully, in keeping with his reputation, Bong carefully manages these tonal changes like a maestro, transitioning so smoothly between genres that the film’s darker and more outrageous turns feel logical, yet still surprising.

The same cannot be said of its navigation of pacing, especially in the last act. Following a chaotic climax — an audacious showcase of Bong’s mastery over character development, social commentary and spectacle — the film slows down drastically to tie up any loose ends and further drive home its message. While narratively and thematically relevant, it drags noticeably and feels just a little too long, dulling the impact of what came before.

Nevertheless, this minor gripe is rightfully overshadowed by the impression Parasite leaves as a whole, both subtextually and contextually. As a film, Parasite demonstrates a further refinement of Bong’s already-lauded skills, bringing the confidence and boldness of films like Okja and distilling it down to the socio-cultural concerns and scale of his beloved Korean films. In this respect, Parasite is perhaps the best of both worlds: a fitting continuation of an already illustrious (and diverse) filmography for veteran fans, and a quintessential taster of Bong’s unique style for new viewers. Given the buzz around its history-making Cannes win and Bong’s growing name recognition from his U.S. productions, hopefully Parasite will introduce an even broader Western audience to the genre-hopping satire of Bong from the place it started — Korean cinema.