Despite a relatively short filmography, Mika Ninagawa has firmly established her own brand within Japanese cinema, identifiable by her fantastical style and comments on female determination and fame. Marking Ninagawa’s third adaptation of a manga, Diner is further testament to both Ninagawa’s strength in visuals and weakness in narrative execution, seeing her shift over further into the unfortunate label of ‘style over substance’. While such an assessment of her previous films may have been unfair, this time the label feels more apt than ever, with the visual bombardment of Ninagawa’s signature colour and exuberance not enough to hide a thread-bare plot and shallow, overbearing attempts at commentary on belonging.

Abandoned at a young age, Oba Kanako (Tina Tamashiro) begins picking up odd jobs to earn a one-way ticket out of lonely Tokyo. After a particularly traumatic gig as a getaway driver, Kanako finds herself kidnapped and forced to work in a diner run by the tyrannical, yet highly-gifted chef, Bombero (Tatsuya Fujiwara). Threatened with murder if she tries to escape, Kanako must also survive the diner’s clintelle of assassins and the threat of a mob war.

Throughout her ordeal, Kanako’s character runs the risk of being a trembling, ‘damsel-in-distress’ type, stoked by Tamashiro’s teary doe-eyed looks and her tongue-in-cheek name, which in full sounds like ‘stupid girl’. Thankfully, like her other leading heroines, Ninagawa and co-writers Hirohito Goto and Yoshikazu Sugiyama  give Kanako an unassuming confidence and defiance as she blackmails and stands up to her captor. Meanwhile, with a booming voice and swagger, Fujiwara is clearly having fun as Bombero without completely abandoning the menace the character requires in the first act. As Bombero becomes more humanised and compassionate towards Kanako, Fujiwara’s famed versatility is given the chance to shine, impressively pulling off the character’s lighting-fast progression despite little story justification. While Bomebero shows this kindness by saving Kanako’s life several times (to the point it becomes somewhat tiring), in turn Kanako draws inspiration and purpose in Bombero’s approach to cooking. 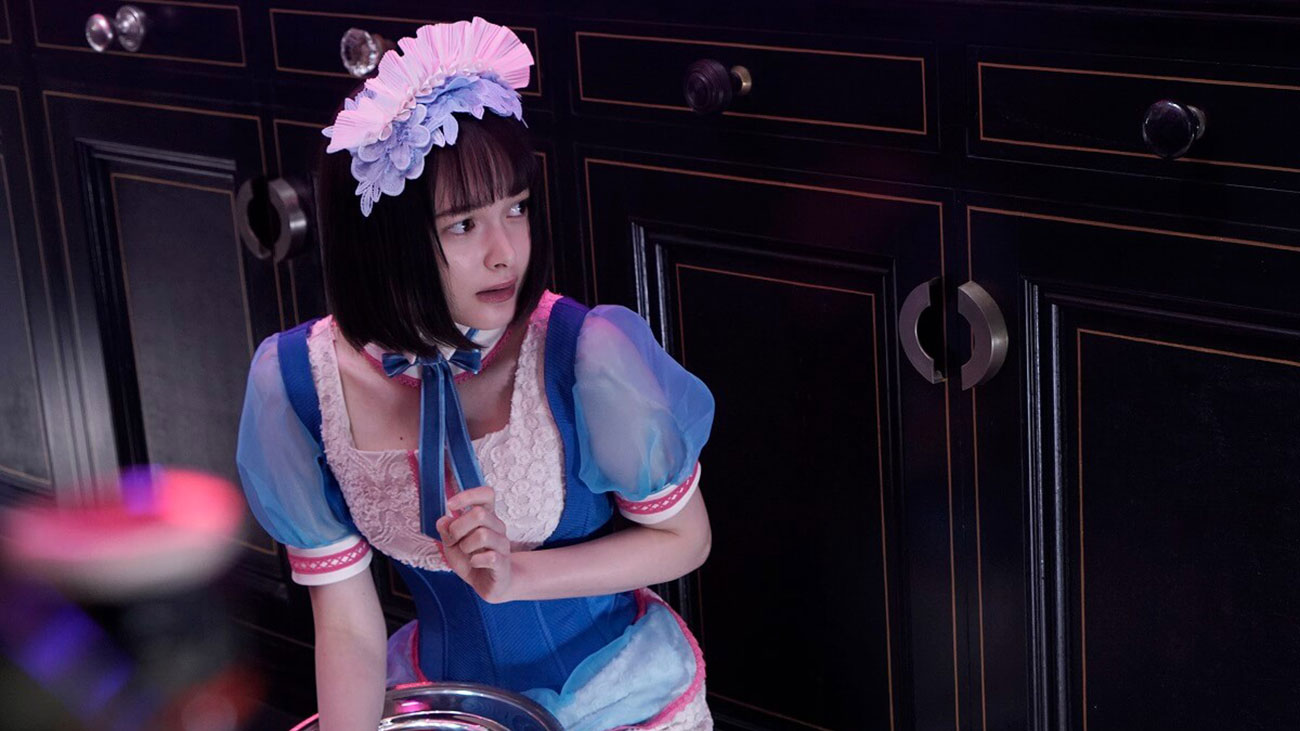 How one reads the evolution of their relationship may differ. Is it a true love story (as one may glean from the saccharine and neat ending)? Or is the context of kidnapping and trafficking too strong, with the relationship borne of a combination of Bombero exploiting Kanako’s need to be wanted and Stockholm Syndrome? I personally sit somewhere in the very morally-conflicting middle ground, but given the film’s premise I can see some disagreeing with the relationship’s progression.

Also mixed and open to interpretation is the film’s technical quality. The opening moments recalling Kanako’s childhood are a perfect example of Ninagawa and cinematographer Daisuke Souma working in delicate harmony. The photographer-turned-director’s experience with bold colour and staging is evident, with saturated lighting, bright flower petals (a Ninagawa staple) and the use of human bodies dancing to create an engrossing, dreamlike atmosphere. Meanwhile, Souma matches Ninagawa’s energy during introductory scenes in the diner, with slick and refined camera movements occasionally punctuated by flourishes, such as point-of-view shots from Kanako’s broom as she sweeps.

However, Diner’s technical confidence starts to crumble during its scenes of frantic action, where Souma’s camera and Ninagawa’s direction just can’t keep up. A switch to handheld cameras capturing action scenes in close-ups render fights incomprehensible to the eye and is only made worse by the use of split-second cuts.

When the film does slow down and let the action breathe in the frame during the climax, the choice to parody nearly every cliche in the book makes me wonder whether they are aware of their shortcomings. This is especially apparent in a shootout between Bombero and a gang boss. Starting with a ‘bullet time’ sequence that echoes The Matrix (leather trench coat included), the scene transitions into a John Woo-esque ‘leap and fire’ moment, stripping all tension and exposing the absurdity of the trope by shooting from afar. By this point, if there is any doubt that the film is not taking its climatic fight seriously, the Shinichi Osawa score beneath should clue you in: a bass-heavy, trap-infused remix of Antonín Dvorák’s Symphony No. 9. 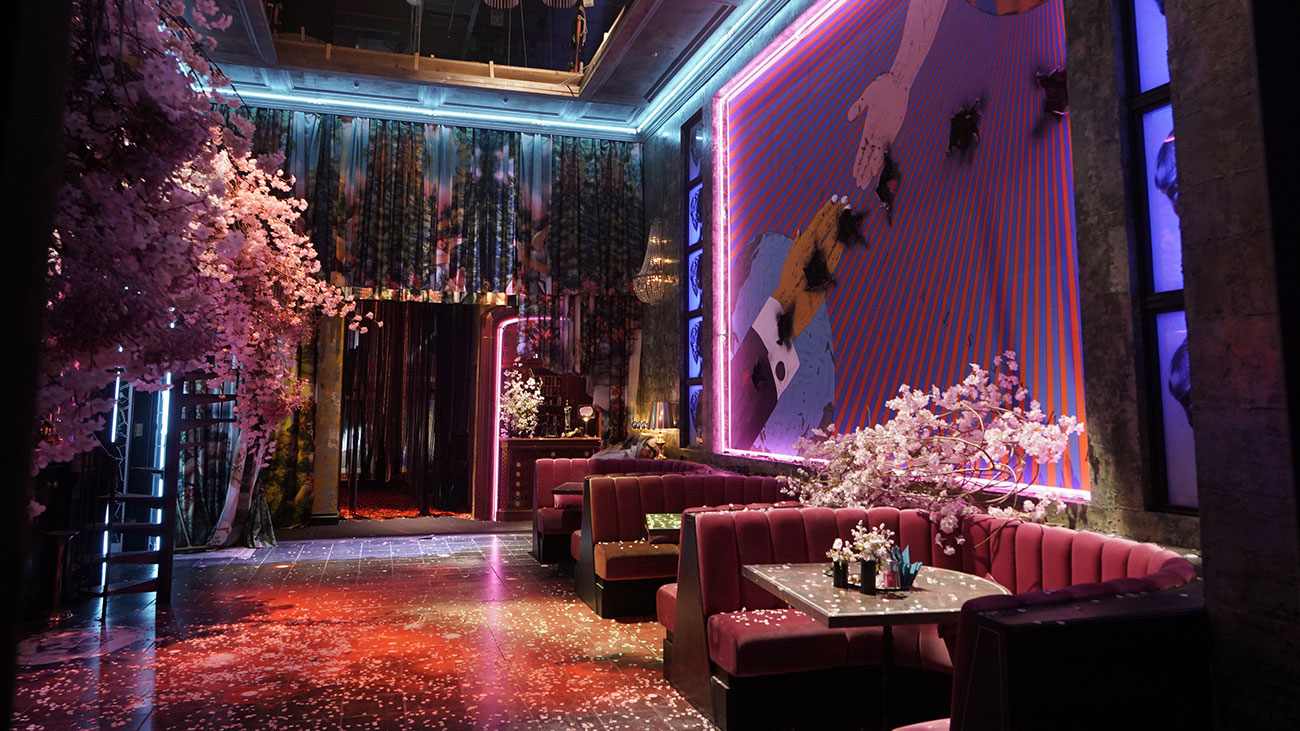 As one could expect, such frivolity and flair extends to Diner’s set design and costuming, with Ninagawa’s unique brand of visual kitsch on full-display. The main dining hall’s design is quintessential Ninagawa, filled with cherry blossom trees and eye-catching art pieces. There’s even a wall of photographs featuring her many long-time collaborators, such as HKT48’s Sakura Miyawaki and models AmiAya, who in the film play the souls of former waitresses who were killed.

Even more impressive is when Ninagawa’s style is used in service of the characters, with each assassin patron having their own themed room. Of particular note is the circus-themed room for Kid – a killer with the face of an adult but body of a child (an unnerving visual effect I never got used to). Nostalgic pinstripe walls and rocking horses clash with defaced babydolls and morbid drawings of death – a perfect encapsulation of the creepy concept of the Kid character.

Given such visual and conceptual strengths, fans of Ninagawa’s photography are likely to be satisfied with the eye candy on display. Unfortunately though, given the lack of substance beneath and a reluctance to indulge narrative-wise, this is not enough to distinguish Diner from the wealth of other well-known extreme Japanese titles. Although the film does make an effort with its musings on purpose and being accepted, its hand-holding, dialogue-reliant approach makes it less stimulating than more provocative works like Sion Sono’s similarly colourful Antiporno or even Ninagawa’s own Helter Skelter. Had writer-director Ninagawa perhaps pushed more at the boundaries of the film’s extreme concept and not undermined Diner’s action with poor camerawork, I would have had more fun and been more forgiving. But as it stands, Diner instead feels like a disappointing souffle — all puff and flair with little to savour inside.