Francis Ford Coppola’s Apocalypse Now is the stuff of legends. Shot on location in the Philippines, Coppola’s epic homage to the madness of the Vietnam War not only left an indelible imprint on the history and folklore of cinema, it also affected the location and lives of the people lived there. While the film’s many tales and yarns and myths have been extremely well documented, one of the more interesting stories to have allegedly emerged involves that of a surfboard left behind from the film’s shoot. It is said that when the Apocalypse Now crew departed Baler after shooting the surfing scenes at the start of the film, they left behind a surfboard floating in the ocean. A local fisherman collected the board and sold it to some young local boys and these guys went on to not only learn how to surf but to become the first Pinoy surfing champions.

This is the starting point for the film Apocalypse Child, a film written by Mario Cornejo and Monster Jimenez and directed by Corjenjo. Not only do they question the validity of this said legend (maybe 50% true?) but they also wonder if something more was abandoned on departure. It’s a great concept for a film because that something left behind is the lovechild of Francis Ford Copella, sired in the chaos of the shoot. This child is now approaching his forties and living it large in a kind of beach bum/surfer sort of way. For most of his life, his mother has been unsuccessfully partitioning the father’s lawyers for a paternity test. She called her son Ford (Sid Lucero). 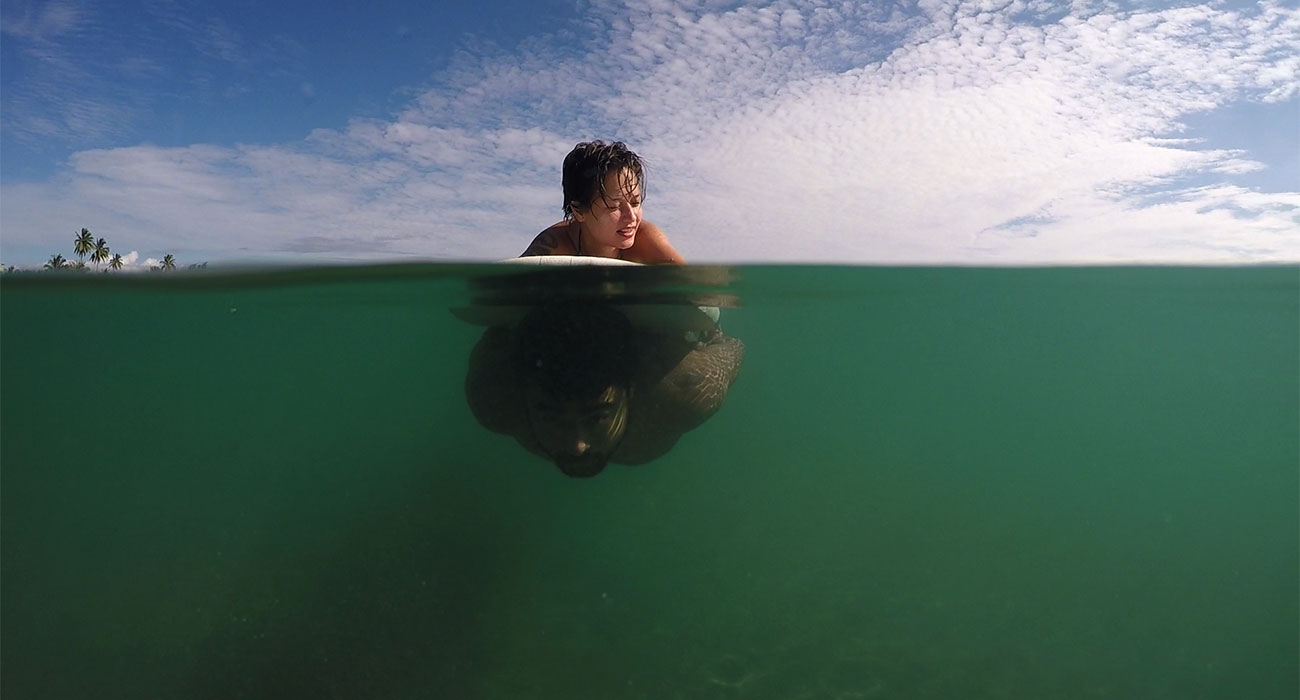 We open on Ford’s ideal life; riding waves, riding mopeds and riding hard with the young and sexy Fiona (Annicka Dolonius). She’s a Filipino American who’s come back to be with her dying grandmother and takes up surfing lessons in the interim. Both her and Ford are falling pretty hard for each other. Ford’s life is at a crossroads and this is brought to a head when Rich (RK Bagatsing), his childhood buddy, returns home from studying in the US to pick up his father’s mantle of local congressman. There is a deep history between these two and it triggers a compelling drama of intrigue as bit by bit we get to piece together the full story. We learn that Ford’s mum Chona (Ana Abad Santos) got pregnant at 14 and that Rich’s dad was violent and abusive. What is the cause of the tension between the two ‘once were buddies’? Why does Rich seemingly give Ford his fiancé Serena (Gwen Zamora)? Is it a test or does he want them to sleep together? Is Fiona really that confident or is she destined to wipe out? Will we find out the real father? What is going on between Rich and Ford’s mother?

All of these plot lines are intertwined and propel the movie forward using the different characters to tease out each other’s stories. The results are sometimes shocking, sometimes sad and everyone is revealed to be flawed in that beautiful human way that seems to be real life, even when it is larger than life.

Not only stylish in concept and story, Apocalypse Child is also stylish with its editing too. Key scenes that play out like montages are cut to dialogue either from or after ‘the vision’ and it is up to the audience to decide where these bits of dialogue are positioned. But just as you’re about to make that guess, the sound then locks into sync with the vision on screen. It’s not a new style but it is used very effectively and not excessively throughout the film.

Another great device is used to help the audience experience Rich’s injury which was inflicted by his father and is a central plot line. Rich can’t surf because his father beat his eardrum right out of his head. As such he suffers from intermittent deafness. This is beautifully portrayed when those around him are speaking. We only see them but cannot hear them. It is more Rich’s point of view from the aural perspective and not from the more usual visual perspective. 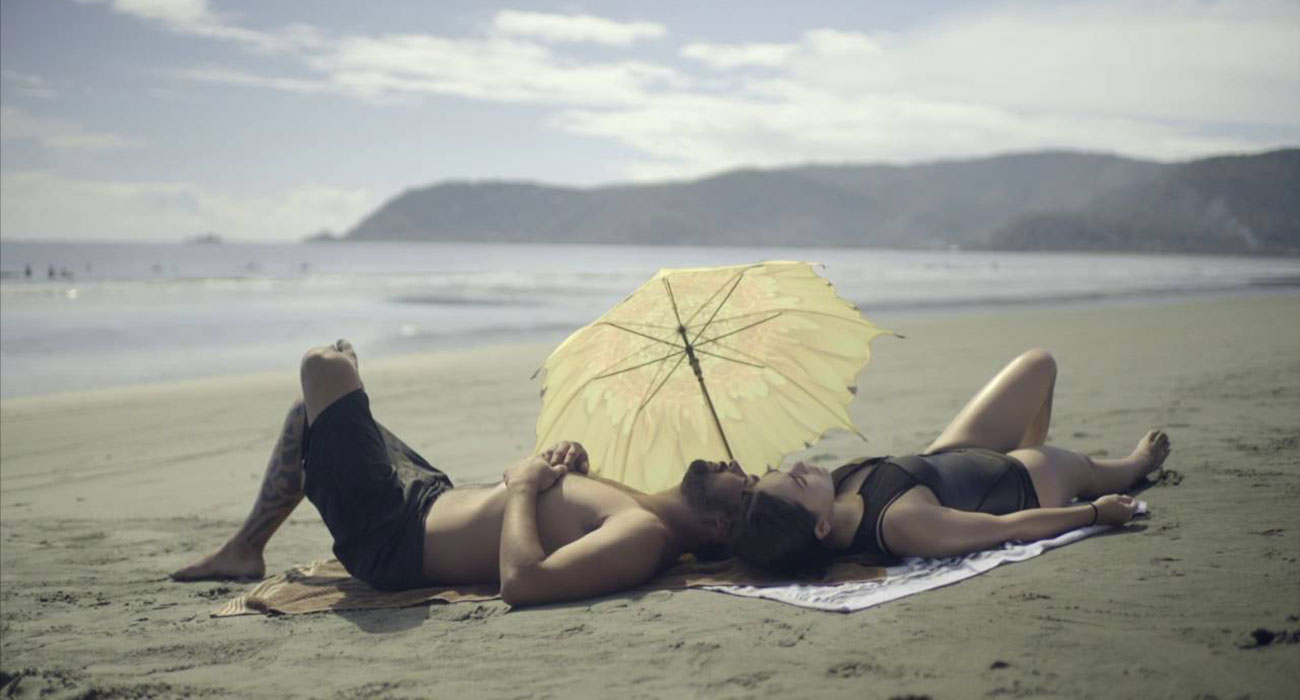 The location of Baler is a highlight and some very scenic panoramas and settings are sprinkled throughout the film. There are also some lovely water visuals too, a favourite being the split screen of above and below the surface. It’s a powerful metaphor but also stunning in visuals, especially when Fiona and Ford are playing in the waves with her on top of the board and him lying underneath below the surface. The use of surfing throughout the film is also very clever and multilayered. As a visual it is just another way to show off the beauty of the Baler beach locations and surfing is always quite compelling to watch. This is layer one. Layer two is as metaphor. The two girls learning to surf, learning to balance, gaining poise, building confidence and practicing technique are all used to accentuate and reflect events and occurrences on dry land.

Then there is the competition between Ford and Ballsack, a young teen threatening Ford’s reign as king of the surf. It’s an older versus younger generation stand off. There are no words uttered by the challenger but there is so much said. This is the older Ford up against the younger Ford he remembers. The recent recipient of Five Flavours Film Festival’s People’s Jury Main Award, Apocalypse Child is a compelling tragedy that showcases the acting talent of the cast, the story smarts of the screenplay and the filmmaking skills of the director and other key crew. It doesn’t perfectly wrap up all its loose ends but as they say, it’s the journey rather than the destination.