If you’ve ever flicked through Korean television channels like KBS or MBC, you’ve likely encountered a Korean reality or variety show; the kind where cute effects and multicoloured subtitles, all accompanied by cheery narration and talking head cutaways, are visual staples. It is in this style that Psychokinesis opens, taking advantage of the format to efficiently explain the backstories of chimek shop owner Roo-mi (Shim Eun-kyung) and her mother (Kim Yeong-seon). This is followed by a chaotic scene of violence – an effective use of contrasting tone which whiplashes viewers from the sanitised presentation of life on Korean TV to the harsh realities of the lower class.

Such an opening seemingly indicates that Psychokinesis will follow in the satirical, genre-bending footsteps of works like The Host and Okja. However, first impressions are misleading, and it becomes apparent that the opening should really serve as a warning for the tonally-messy, rushed film to follow.

This is a particular shame, given the immense potential of its premise and writer-director Yeon Sang-ho’s capabilities (Train to Busan). Following the aforementioned opening sequence, we are introduced to Seok-heon (Ryu Seung-ryong), a cowardly and lazy security guard who gains superpowers after drinking tainted water. He soon attempts to reconnect with his fiercely independent daughter Roo-mi, who lives in a displaced community battling eviction by a mob headed by the suave gangster Mr. Min (Kim Min-jae). 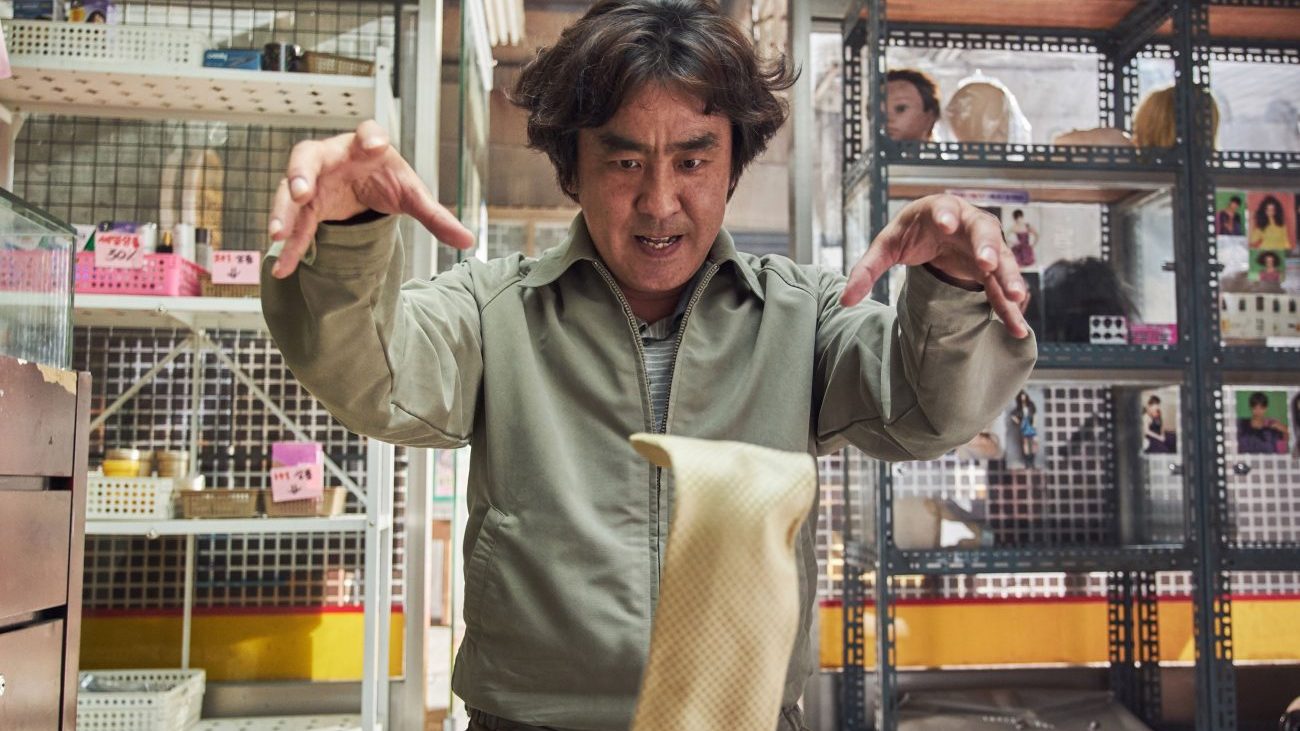 Social issues surrounding urban redevelopment are prevalent throughout the storyline, which seems to borrow heavily from a real 2009 incident. It’s a promising, seemingly underexplored, topic which allows Yeon to touch upon other societal matters such as class division, the overwhelming power of corporations, and the influence of media on public opinion. Unfortunately, the relationships and characters of the squatters (aside from Roo-mi and her lawyer) are so underdeveloped – verging on non-existent – that it is difficult to become emotionally involved in their plight and, by extension, the real-world issues it draws upon. While a late plot-twist gives weight to unfair the social structure of modernised Korea, it comes far too late. Had Yeon slowed down the extremely rushed first act to develop the camaraderie of the community at the centre of the film, perhaps the risks and stakes of such societal turmoil could be felt more fully during the climax.

Commentary aside, if you don’t have this historical context (which I didn’t prior to this review), it can be easy to miss the film’s social messages and view it purely as a comedic superhero flick. At this point Psychokinesis will prove divisive given the highly subjective nature of humour – with myself seeing it as a failure.

This is most apparent in scenes featuring the film’s namesake – psychokinesis. Moments involving superpowers are painful in their forced slapstick humour. Ryu, as Seok-heon, are far too over dramatic as he moves objects with his mind – his exaggerated facial expressions and body movements so overplayed that it induces second-hand embarrassment (although this feels more of a result of direction, rather than the actor’s ability). This is exacerbated by a cliched-soundtrack filled with obvious, stock sound effects which further cheapen the already silly humour (a harp sound effect as Seok-heon lifts an object managed to make me chuckle in disbelief).

Even when the film turns to more serious or suspenseful moments, these are often interrupted by an overlong incident of slapstick so tonally dissonant it causes eye-rolling rather than laughs.

However, there are a few (too) brief glimmers of genuine comedy delivered by Mr. Min’s sideman (Tae Hang-ho) and boss Hong Sang-moo (Jung Yu-mi) . The former’s naive and cheerful demeanor is peppered through enough smaller moments (such as posing with a cheesy peace sign next to a battered Jeong-hyun for a photo) that it sufficiently develops character without dedicating too much time to what is ultimately a minor role. 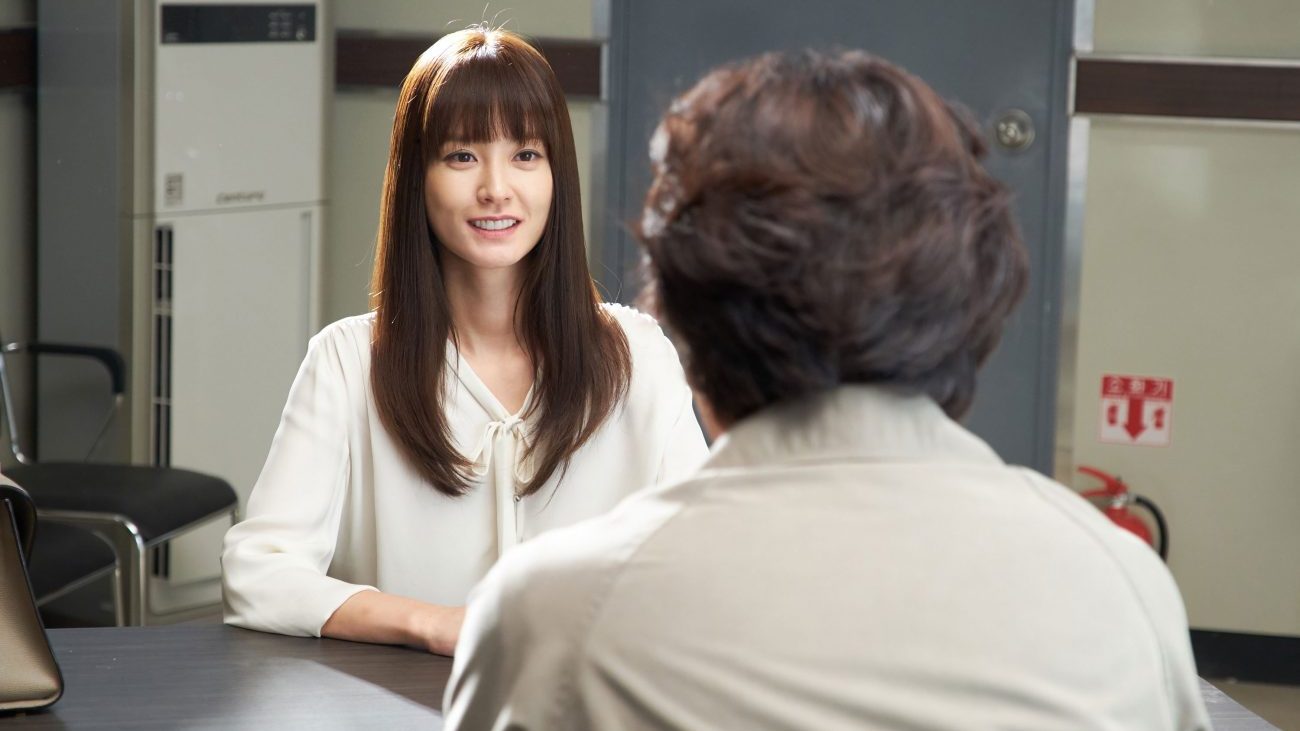 Meanwhile, Jung is much more outrageous as Hong, a business woman who terrifies those around her. Despite her seemingly unpredictable antics, Yeon writes the character as a woman who is clearly self-aware of her actions; a woman in control of her emotions. This is reinforced by actress Jung who naturally switches from menacing to joking to outrageous, all within minutes. It all feels very natural to her character, and the effortless manner in which Jung pulls off such dramatic transitions makes what could otherwise be yet another forced comedic role into something much more.

Despite some great (if not a little unrealised) potential in its social commentary and imaginative plot, Yeon’s attempt at a superhero movie is ultimately disappointing for many reasons – pacing, writing, and ineffective comedy just being a few noted here. Yet when I really reflect, my sense of disappointment in the film really stems from (perhaps unreasonably) preconceived expectations of Yeon. Train to Busan’s skilful blending and reshaping of the overdone zombie film with the personal and familial aspects typical of Korean thrillers gave me high hopes for what Yeon could bring to the over-saturated superhero genre.

And while it does bring a unique Korean flavour to the genre through its highly contextual social commentary and smaller scale, the combination of rushed storytelling, simplistic (and often annoying) characters, and a loose handle on tone means Psychokinesis falls short of reaching its ambitions – instead landing with a mere mediocre thud.