“In Bombay, everyone is a Bombayite. Origins don’t matter.” This is the premise of a love story between two young people living day to day in the city of Bombay. Bombay Rose is Gitanjali Rao’s first full-length animated feature and is a multi-narrative romance that also serves as the director’s love letter to the city of Mumbai, formerly known as Bombay. Its main story centres around Kamala (Cyli Khare) and Salim (Amit Deondi), a pair of characters previously introduced in Rao’s short film True Love Story.

Kamala is a Hindu woman from Madhya Pradesh, located in central India. She has made her way to Bombay with her sister Tara (Gargi Shitole) and her grandfather (Virendra Saxena) after escaping a child-marriage. Salim is a Muslim man from Kashmir, in the northernmost part of the South Asian subcontinent, who escaped from home after losing both his parents to military conflict. Both are now street-sellers in Bombay: Kamala sells jasmine garlands and has a secret job as a dancer in a bar at night, while Salim sells roses. The prospects for an easy love story are not very bright however as Salim is frequently reminded that Kamala is “out of bounds” by Mike (Makrand Deshpande), a gangster who we later learn is part of a human trafficking network. In Kamala’s case, he also wants her to leave for Dubai in exchange for taking care of Tara’s education, an offer that she’s warned against by other dancers. Rounding out the film are its other two stories, one about a child and the other about the taboo relationship between Anglo-Indian film star Miss D’Souza (Amardeep Jha) and a former lover.

Among the flowers that Kamala and Salim are selling, it is a rose that serves as a common thread through the film. It takes us to some parts of Bombay and introduces us to various characters related to the main two. Yet the more this rose connects the audience to the rest of Bombay, the more things appear disorganised as Rao’s script struggles to keep a clear storyline. However, the story still works, as the audience gets to appreciate the changing dynamics between characters and their relationship to the city. Social issues are mentioned in the film and give more context to understand the characters. The most obvious issue, despite its complexity, is one of a love story that struggles to flourish due to a difference of religion, especially in a country which historically has discriminated couples in interfaith relationships. Other topics such as discrimination against same-sex relationships, the legacy of the British colonial rule, human trafficking and child labour are also touched upon. 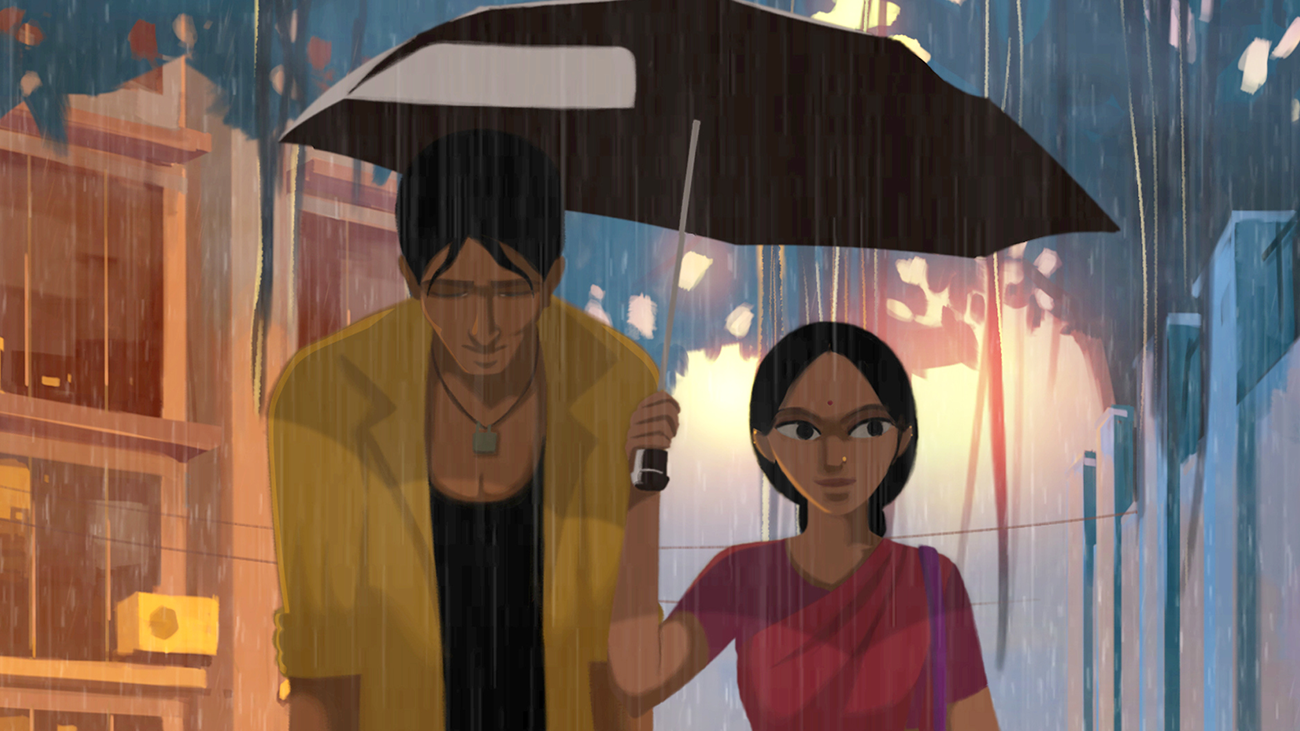 In Bombay Rose, it’s also thanks to Rao’s brilliant animation that the audience is invested in the past and future of secondary characters, who are as interesting as Kamala and Salim. From the opening sequence of the film, the audience has an idea of the quality of design and animation that awaits them. It’s a timelapse that shows Rao’s ambition as simple brush strokes animated on screen quickly form into a gorgeous and fully painted picture of Bombay. This serves as an introduction to the film’s multiple background designs, each of which act as a tribute to the city.

Another way of honouring Bombay, a city with a significant history of migration, is by giving special attention to the origins of the characters, their dreams, and what unites them despite their differences. What is it that connects Salim, a young Muslim man, and Kamala, a young Hindu woman? Tara, a schoolgirl, Tipu, a child worker and Tara’s grandfather, a watchmaker? What lies beyond the late love of former Anglo-Indian film star Miss D’Souza?

When shifting the perspective of the main story to focus on a singular character’s point of view, Rao uses a signature-method previously seen in her shorts Orange and Perfect Window; she juggles with various art forms and incorporates different styles, all suitable for 2D animation. In Bombay Rose, inspiration is taken based on the place of origin of its characters. We find certain forms of traditional art such as Mughal miniature paintings when it comes to Kamala’s imagination, and truck art painting that is found in North India and Pakistan for Salim’s. 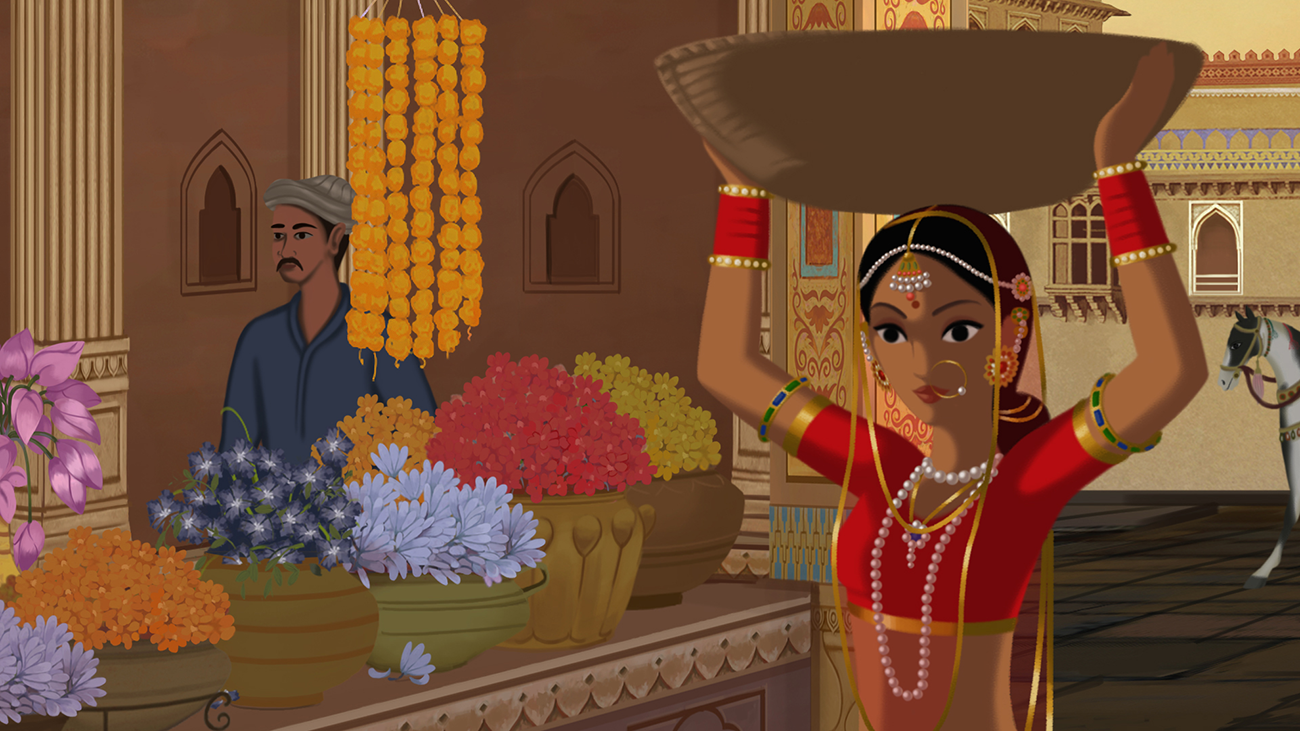 Unique art styles and techniques aren’t the only tool that Rao uses to distinguish her characters as the filmmaker also uses cinematic genres to define them. We find Salim on several occasions and pivotal moments in a Bollywood film context, seeking an escape from the uncertainty of his daily life, while the codes of film noir are what define Miss D’Souza and are reminiscent of her past.

Also noteworthy is Bombay Rose’s music selection. Kamala’s theme, “Rewa Nainon Mein Rahe”, translated as “Rewa, the river dwells in my eyes”, is a very delicate piece performed by Kamala’s voice actress, Cyli Khare, and is played repeatedly throughout the film. Indian songs from the 1950s to the 1970s like Lorna’s “Red Rose” guide audiences through the city while more intense tracks such as Laya Project’s “Tapatam” are used for faster paced scenes. Additionally, “Cucurrucucú Paloma”, which Wong Kar-Wai fans will quickly recognise, complements Kamala’s theme as both touch on ideas around longing and sorrow.

Bombay Rose explores themes like taboos that can stand in the way of romance, loss, longing and even perhaps found families. Despite a story that can at times evolve in an awkward manner, the work put into the production makes up for it. The film is an animation with rich colours in both day and night scenes, rich textures, backgrounds and graphic styles that not only paint a love story between two characters, but also a loving declaration to the busy and complex city of Bombay. With the visual success that is Bombay Rose, there is hope that the landscape of animation in India will keep growing with more features from Gitanjali Rao and future emerging artists.