Mountains May Depart was director Jia Zhangke‘s competition entry for this year’s Cannes Film Festival. Having picked up the Golden Lion in Venice for Still Life and the screenwriting award for A Touch of Sin a couple of years ago in Cannes, there was much to anticipate with Jia’s latest.

Zhao Tao, the film’s lead actress, was hotly tipped to take home the Best Actress award at Cannes but lost out in the end. Still, it is not hard to see why. Her performance is irrefutably the strongest aspect of Mountains May Depart which is perhaps why it is frustrating from an audience’s perspective that Jia refused to focus on her character, instead attempting to reach ambitious levels of storytelling that were never fully fulfilled in his latest film. 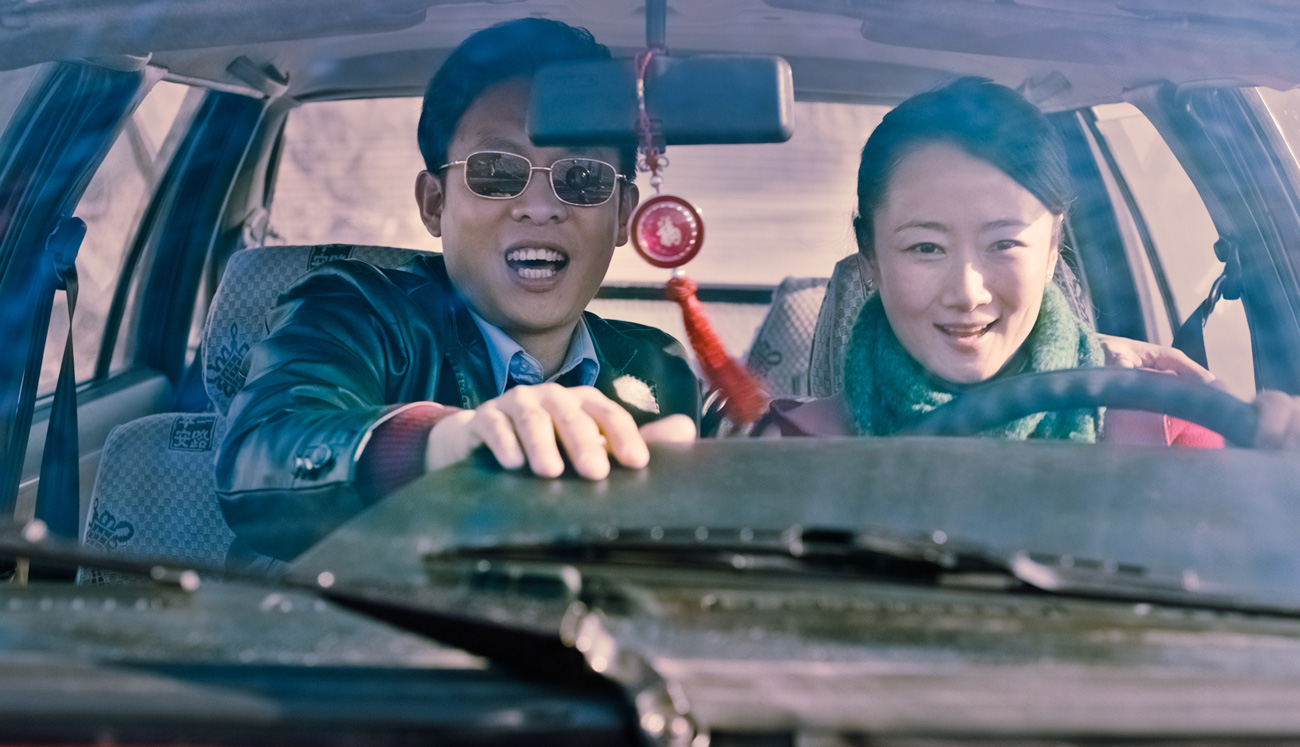 Like A Touch of Sin, Mountains May Depart is told in three parts except here each segment utilises a different screen aspect ratio. Recent films such as Wes Anderson‘s The Grand Budapest Hotel and Xavier Dolan‘s Mommy have experimented with the varying aspect ratios to much success. In Mountains May Depart, the first part, set in 1999, utilises the almost squared 1.33 ratio. This first segment is also the most straightforward in terms of its storytelling yet its effectiveness is often lost due to its lack of editing.

We learn that Shen Tao (Zhao Tao) is caught in a love triangle between the humble, stoic Liang (Liang Jingdong), who works as a coal miner and the loud and their flashy friend Jinsheng (Zhang Yi). The love triangle itself functions as a rather transparent metaphor for modern China: Jinsheng represents capitalism and the future while Liang represents the bygone years that modern China would prefer to forget about. Of course, Tao’s choice is China’s choice — she goes with the money and chooses Jinsheng. The square aspect ratio gives the impression of a much bigger story, and also a suggestion that Tao’s choices as a Chinese woman is limited. As this first part concludes, you get the sense that these themes will be properly explored, but unfortunately this is never actualised. 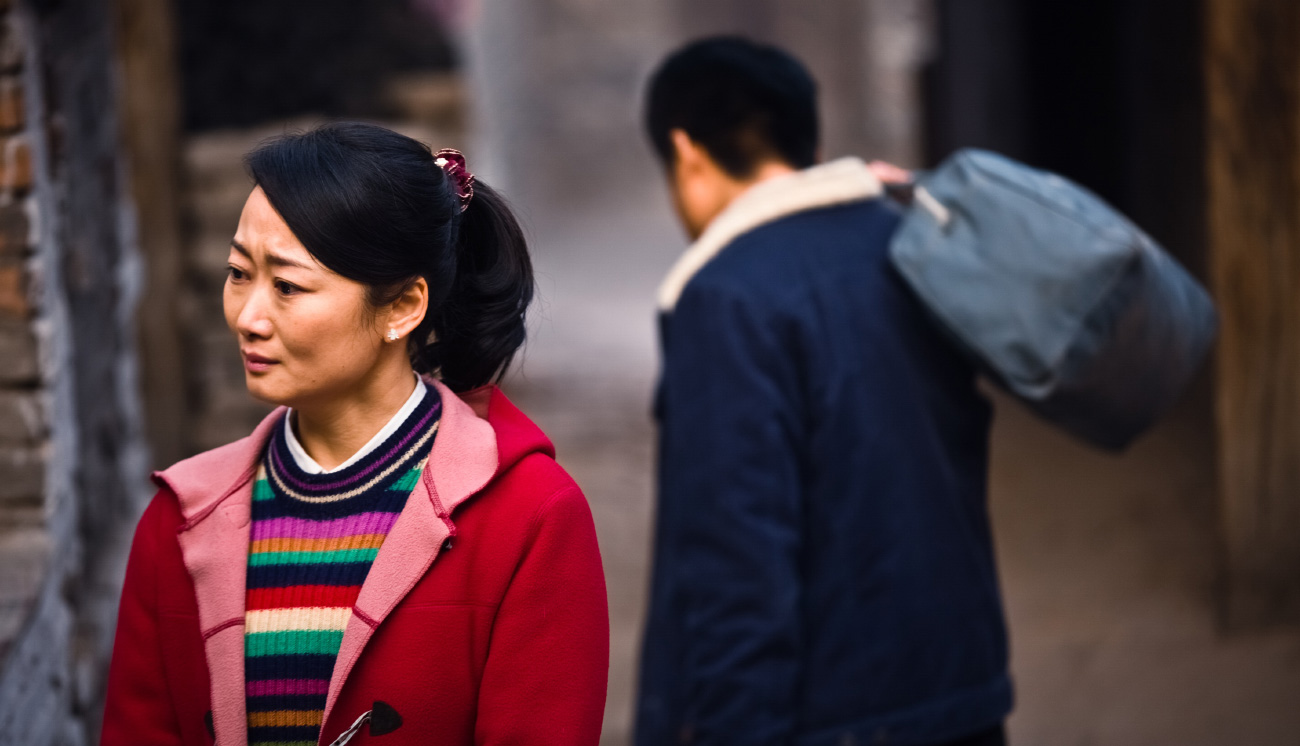 The second segment is probably the least problematic out of the three parts though this isn’t saying much. Set in 2014, with the wider 1.85 aspect ratio, this part of the film deals with the aftermath of Tao’s divorce from Jinsheng where we see her return to her hometown of Fenyang. For a while, it looked like as though Mountains May Depart‘s second segment would deal primarily with Tao only for it to suddenly shift its focus to Liang, who has also returned to town after becoming sick with lung cancer. He is reunited with Tao but the story never does anything with this and you begin to wonder why Jia needed this storyline when he could have concentrated fully on his best asset in Zhao Tao and her character of Tao.

The theme of motherhood is introduced also in this segment as Tao struggles to connect with her estranged son, who is now 7 years old and and living with Jinsheng who holds primary custody. It’s a promising theme, one that in hindsight deserved to have been explored with greater depth as Zhao Tao delivers her best work as a loving mother who feels culturally and emotionally disconnected from her son. But of course, Jia had other ideas and instead chose to close that chapter and move on to the disastrous third and final segment.

The third and final part of the film focuses on Tao’s son Dollar in 2025, who is living in Australia. His relationship with Jinsheng is strained and pretty much non-existent. Literally nothing in the third segment works. The choice to focus on Dollar is terrible in the sense that the actors are hindered by the language barrier; the delivery in English is awkward. Dollar is meant to be a representation of Jia’s cynical view of modern China’s future; that the youth are becoming completely displaced from their native tongue and culture with the globalisation of China, but the writing as a whole is clunky. If Jia really had to push for this segment, he could have just kept the story at a minimum instead of throwing in the ridiculous May-December romance between Dollar and his teacher (played by the legendary Sylvia Chang). The romance, again, is another of Jia’s unwieldy metaphors with Chang’s teacher character as a stand-in mother figure with an Oedipal edge.

Ultimately, it seems like the story and characters in Mountains May Depart are secondary to Jia’s heavy-handed allegories on modern China. He never lets his characters grow organically, with many plot developments feeling forced. Concerning the first segment, Jia’s actors have no chemistry to build a believable enough love triangle for the audience to be invested in. Despite Zhao Tao doing what she can with what she’s given, it seems to be a deliberate move on Jia’s part to make the audience feel like as though they shouldn’t bother rooting for either of Tao’s suitors. It’s as if Jia assumes the audience will predict that she will go with the money since this is the kind of low-key satire that Jia tends to slip in his work. But because of the uneven tone, that kind of direction choice with the characters and actors just does not work ultimately in keeping the audience interested.

Jia also makes a giant misstep by not focusing solely on Tao, completely leaving her out of the third act until the last scene, which is actually fantastic and once again shows off Zhao Tao’s talent. But by this time, the audience has completely lost any goodwill for the film after that disastrous third act.