JFF 2017 Review: The Tokyo Night Sky is Always the Densest Shade of Blue

In a city of ten million like Tokyo, it can be easy to be just part of the crowd – forgotten as an individual and seen as merely one of many. Director-writer Yuya Ishii’s latest focuses on these overlooked Tokyoites – exploring the human anxieties which pervade the lives of those unseen through a surprisingly dour romance. Based on a collection of poetry, The Tokyo Night Sky Is Always the Densest Shade of Blue’s cynical tone and poetic interjections are a refreshing take on the age-old love story, even if its core narrative is sparse and slow-moving.

The philosophical musings of The Tokyo Night Sky Is Always the Densest Shade of Blue are often delivered by Mika (Shizuka Ishibashi), a nurse who moonlights as a server at a girls bar. Despite her profession, she is far from personable and is unabashed in her attitude towards death (“Don’t worry, you’ll soon forget” she thinks as a widower farewells his recently deceased love). Meanwhile, Shinji (Sosuke Ikematsu) works in construction along with a motley crew of Tokyo residents. The two strangers encounter each other in a series of chance meetings, with their lives slowly intertwining.

Despite a relatively short 108 minute runtime, The Tokyo Night Sky Is Always the Densest Shade of Blue’s realistic tone utilises a considered pacing, with the story revolving around minor encounters between the two leads. The film’s close examination of the ‘unseen’ working class sees it work better as a character study rather than a traditional drama or romance. Of particular interest is Mika. On first inspection, it would be easy to dismiss her as angst personified. She is outspoken in her disdain for society, where people appear unaware – or perhaps unwilling – to be honest with themselves (“The moment you love Tokyo, it’s like you’ve killed yourself” she notes at one point). She is unafraid to speak openly of mortality and, in a break with romance genre convention, decries love – envisioning its ability to destroy individuality and emotionally devastate as a destructive kaiju (creatively portrayed with hand-drawn animation). But to boil her character down to merely a representation of angst would discredit Ishii’s ability to develop his lead. In spite of Mika’s blasé display of indifference towards death and romance (played with appropriate opaqueness by Ishibashi), brief moments of genuine emotion and repeated dialogue suggest this is merely a performance to avoid confronting her painful past. 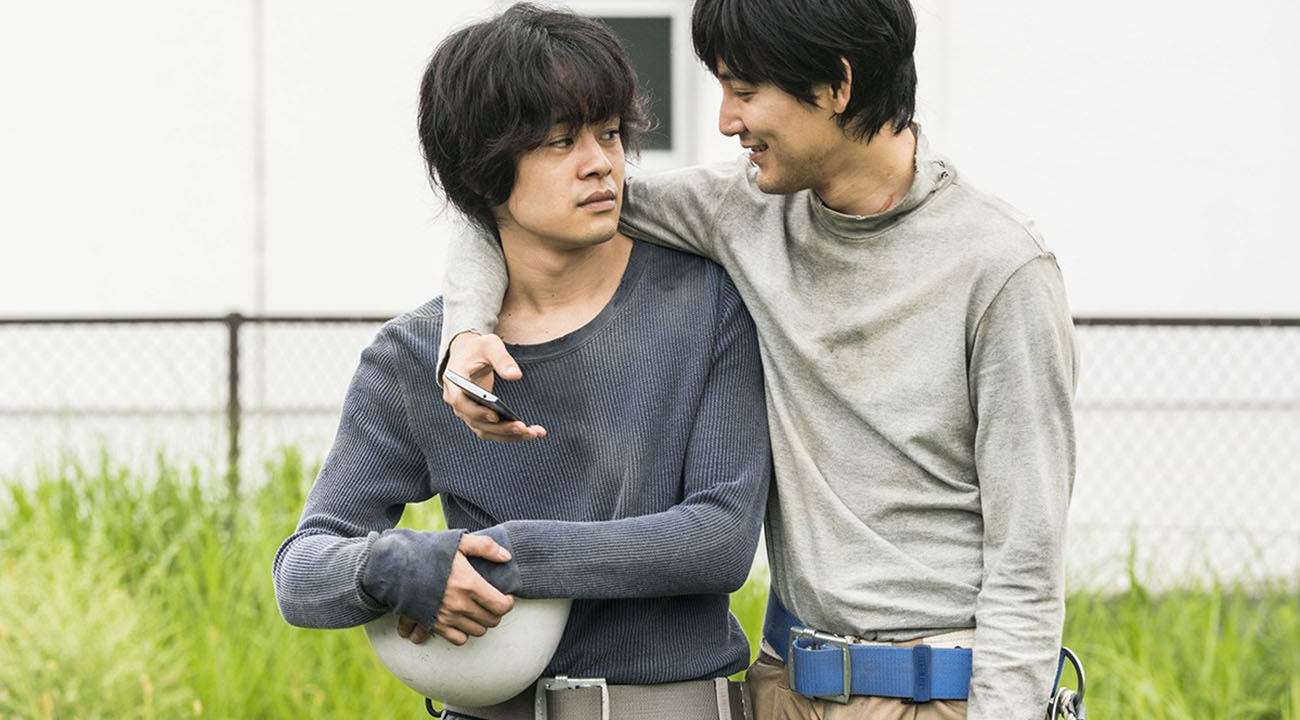 Shinji is similarly emotionally repressed, but it seems to not be of his choosing. Told to be quiet whenever he goes off on a fast-paced rant, a growing jadeness with the artificiality of others and the inability to ask for emotional support begins to develop. The transition between states is handled well by Ikematsu, whose subtle versatility is represented well during his moments of frenzied worry. Initially played with an endearing playfulness when rattling off facts about zippers, later similar scenes show a once humorous use of pacing (both in terms of physicality and dialogue) turn to utter distress, with Ikematsu adding a stutter and doubt to a previously confident stream of consciousness. Whilst both characters are somewhat stagnant in their overall personalities, it is these minor shifts in outlook and acting details which bring a realistic sense of change, rather than the convenient, drastic transformation seen in most films.

The Tokyo Night Sky Is Always the Densest Shade of Blue’s character-driven story does not mean Ishii abandons the other ‘unseens’ of Tokyo (to do so would almost be hypocritical, with Mika expressing her distress over what distinguishes the ignored from the important). The film can be far from subtle in its portrayal of isolation, with one montage showing each central character alone at night accompanied by Mika’s narration of “Are you okay? Are you alive?” (questions she claims are never asked, but merely assumed in an attempt to pretend everything is alright). But even passing characters build upon the atmosphere of solitude and detachment throughout – an elderly man too poor to run his air conditioner, a salaryman whose stressed banging on the walls of his loud neighbour go unheard, and identically-dressed factory workers packing bento by the boxful. It is a brief touch, but one which goes far in establishing the film’s tone and humanising the population of Tokyo.

Accompanying these scenes of detachment is cinematography which somehow accentuates the film’s lonely tone whilst being frenzied in its movement and various styles – each with their own purpose. The use of a mobile maps app to represent a character’s movement is a possible commentary on the isolating potential of modern technology, whilst point-of-view shots from Shinji’s perspective simultaneously communicate his impaired vision, affection for Mika, and observative nature by blocking half the screen. Meanwhile, more standard cinematic techniques such as slow-motion and dramatic zoom-outs which call to mind Hong Sang-Soo emphasise the emotional disconnect between Mika and Shinji and the surrounding populous city. 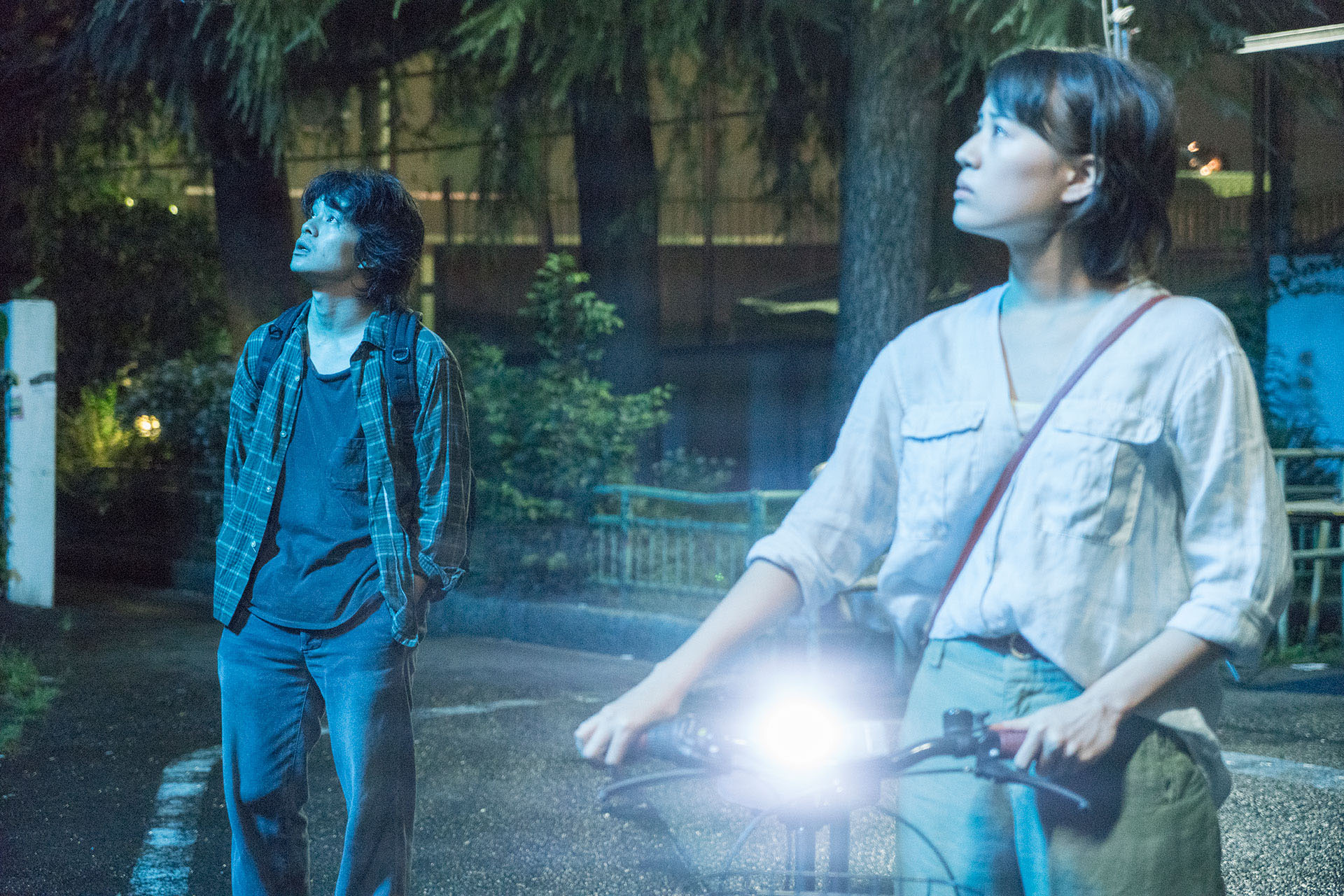 But for a film so unafraid to wallow in existential despair and loneliness, a late turn into what could be described as light romantic-comedy (at least by this film’s standards) will be either jarring or a relief. Whilst there are moments of humour throughout from Shinji and his elderly co-worker, Mika’s sudden switch of dialogic style from sombre poetics to short, frank punchlines played for laughs is at the least noticeable (a fun twist on the ‘running to your love’ trope wherein Shinji appears at Mika’s apartment is one example). However, this does not mean the film has abandoned its previous preoccupations with impending doom. Mika still carries her anxieties and abandonment issues during the times she should be happy – an experience some who have anxiety can relate to. She is still the same person despite love’s touch – not devoid of personality as she predicted, but not free from unhappiness either.

It is this sense of strong continuity which in the end may be The Tokyo Night Sky Is Always the Densest Shade of Blue most divisive feature. Some may feel frustrated by the slow development of the characters and their relationship, with the most significant development lazily delivered by a confusing time-skip. Others familiar with Japan’s slower-paced dramas and slice-of-life features however may be able to withstand the largely placid plot to find a surprisingly honest display of basic human anxiety under the twinkling neon lights of Tokyo.