What happens when we lose our knowledge of the past?

What about when we lose sight of what is happening now?

These are the questions asked in Toshiaki Toyoda’s informal ‘Wolf Mountain’ trilogy, composed of the 2019 short Wolf’s Calling and 2020’s Day of Destruction. Despite some recurring locations and actors, Wolf’s Calling and Day of Destruction are radically different in their tone, stories, and societal concerns. Although a testament to Toyoda’s versatility, unfortunately neither really live up to the full potential of their intriguing premises. 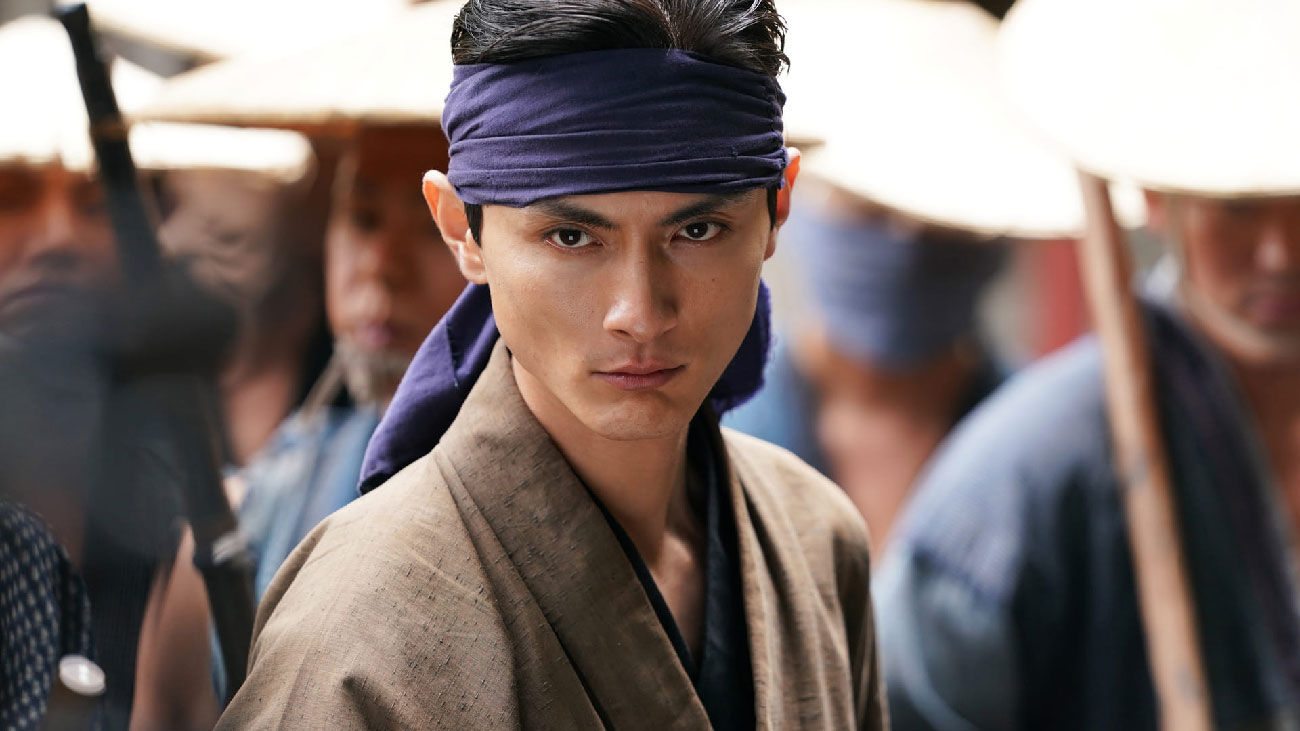 A woman searches through the drawers of an abandoned building when suddenly she finds a gun in a box. Based on Toyoda’s own experience being arrested for possessing his grandfather’s firearm, Wolf’s Calling dives into the history of the in-film gun with an extravagant, music video-esque montage. Entirely free of dialogue, the majority of the short is dedicated to assembling a crew of nameless samurai played by some of Japan’s most recognisable actors (including Yôsuke Kubozuka and regular Toyoda collaborator Ryûhei Matsuda). Each is given a gorgeously shot visual introduction as they make their way to an ōkami (a now-extinct Japanese wolf) shrine, accompanied by an increasingly chaotic score of traditional Japanese instruments composed by the Seppuku Pistols. The choice of traditional-meets-punk composer and wolf iconography throughout are intentional in strengthening the film’s reverence for a potentially-forgotten past. The Seppuku Pistols explained in an interview that ōkami are a symbol of “the lost tradition and culture of Edo period in the course of modernisation and westernisation of the country”. (Oh, and the group also claims to be the last surviving ōkami.)

These bits of context are certainly interesting and the build-up to a surprising cameo and reveal is well-executed, but with the film giving so little in the way of story or characterisation it’s difficult to justify just how long this sequence drags on for a message which is sufficiently communicated by the short’s present-day bookends.

If Wolf’s Calling infers disappointment at our ignorance of the past, Day of Destruction shouts rage at our indifference to what is going on around us.

Unlike the vagueness of Wolf’s Calling, Day of Destruction slams audiences with its timely message. In 2020, an epidemic is sweeping Japan seven years after a pulsating, fleshy monster is discovered (its physical form perhaps a reference to Akira given Day of Destruction‘s preoccupation with the currently postponed 2020 Tokyo Olympics).

While villagers remain cautious of the epidemic, it is clear they largely feel powerless to change its course and relegate all blame to a literal monster. However, a Shugen-dō follower named Kenichi (Mahito The People) believes he can heal the world of sin and sickness through pilgrimage to the Mt Resurrection Wolf Shrine (coincidentally the same shrine in Wolf’s Calling). 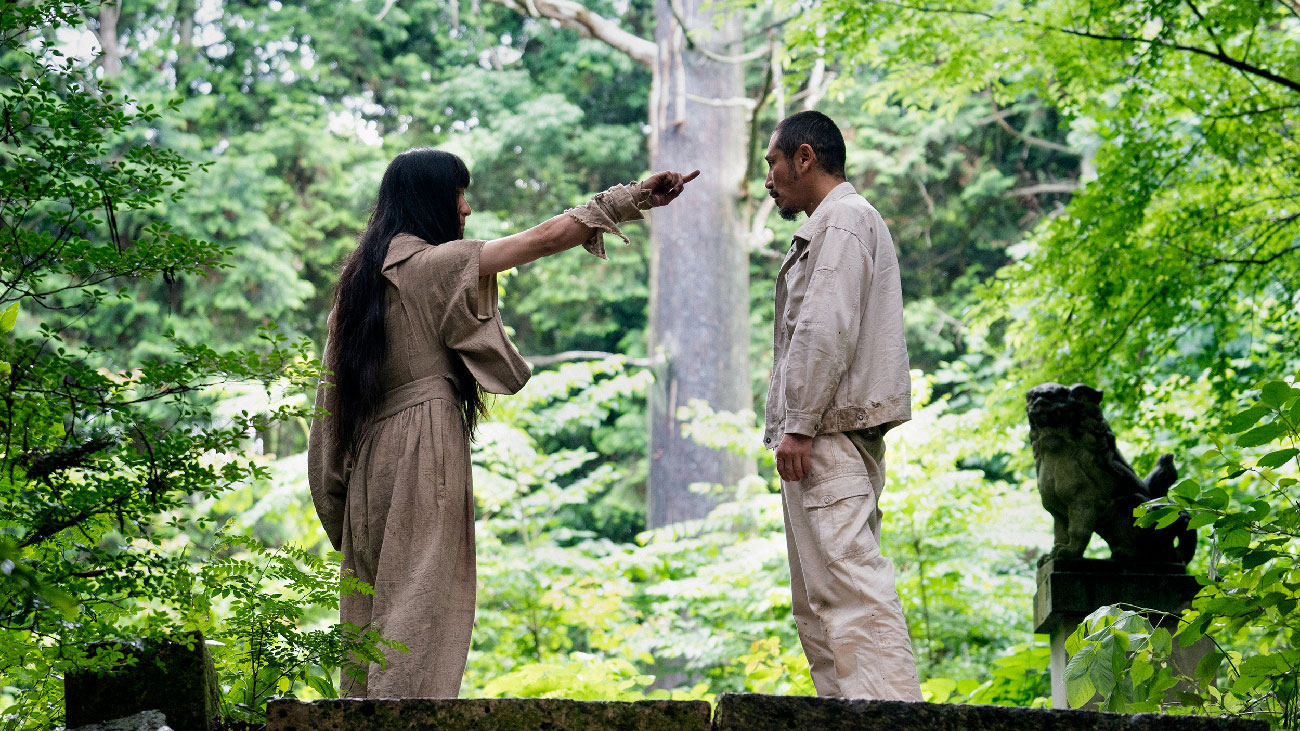 The current-day relevance of Day of Destruction’s epidemic story is startling. The film’s crowdfunding page notes that the story was originally conceived as a statement on the flashy greed of the Tokyo 2020 Olympics. Yet with the evolving COVID-19 situation (during which the film was shot over 8 days with consideration for COVID safety), its central monster analogy now more closely reflects the lingering pandemic in which we are currently living.

From the opening credits, in which a rock song by metal-rock band Gezan (fronted by Mahito The People) screams lyrics like “virus, virus, virus, self-restraint encouraged, do you all realise the identity of the monster?”, it is clear that Toyoda is frustrated by the real world response to COVID. The most obvious finger pointing is at the government (“The government is raping all our senses…Now is the time to rage” goes another soundtrack lyric). But unlike other recent fictional works like the bureaucratic satire of Shin Godzilla, Toyoda also turns his eye to the general public who avert their gaze to the crisis around them. In a series of similar instances, labourer Teppei (Kiyohiko Shibukawa) comes across a businessman in a rice paddy rambling that “the monster infected us all,” and “I’ve done nothing wrong”. Teppei later crosses paths with him again begging for entry to a locked building, crying “Politicians, lawmakers, bankers, and monks, all of you inside hiding from us!”. While such blatant writing of already obvious metaphors around selfishness and fear help the film’s brisk pacing across its 60 minute runtime, a bit more subtlety would have been appreciated. Toyoda doubles downs with an ending that teeters over from being motivational to patronising with its directness.

What is surprisingly restrained, however, is the cinematography. A notable switch up from Wolf’s Calling epic aesthetics, cinematographer Kenji Maki’s spacious, symmetrical shots and use of gradual zoom possess a grace the script sorely lacks. Even when Maki experiments with more overt displays of style, such as the opening flashback shot in stark black-and-white with moments of shaky cam, it never feels ostentatious, but rather striking.

The production of Toyoda’s double-bill on human ignorance is admirable – one drawing inspiration from the director’s criminal history which saw him blacklisted from the industry, while the other was produced during a deadly pandemic. But despite some nice visuals and excellent sound design and music, neither of the resulting films are as challenging as the events which surround them.