In the beginning of 2017, South Korean citizens from all walks of life mobilised to take part in weekly candlelight protests against the sitting president Park Geun-hye. They called for her impeachment, with protests continuing on for months. At its peak, millions of South Koreans protested peacefully in the streets across multiple cities, all in the bitter cold of winter. This was their resolve. The sheer mass of the protest saw its eventual success with politicians and lawmakers daring not to doubt the will of the people. In the history of South Korea, these protests were not out of the ordinary — the country has mass protest written in its DNA.

Now cast back 30 years prior in mid-1987. The South Korean people are disillusioned with the way their country is being run and change is on the verge of arriving. 1987: When the Day Comes is the retelling of another very famous protest movement, this time against the sitting president and dictator Chun Doo-hwan. Set a year before the Seoul Olympic Games with the country on the cusp of promised democratic elections, it’s tense times as dictatorships don’t stand aside easily. The clashes are violent as the people become more passionate and the authorities more reckless.

The Anti-Communism Investigation Bureau (ACIB) runs rampant, operating with a brutality that would make the SS blush. Students, suspected dissidents and anyone voicing opposition to the government are snatched off the streets and sent straight to their interrogation rooms/torture chambers. They have a presidential greenlight and immunity from the law but it all goes belly-up one weekend in June 1987.

An on-call prosecutor won’t release the body of a prisoner for cremation until an autopsy is performed on the Monday. Whatever his motivations, and they appear to be anything but altruistic, this defiance sets in motion a chain of events. Slowly, it emerges that a young student was tortured to death. They went too far and for what? The cover up is revealed, the press break ranks with the story making front page news. The people are outraged and they hit the streets, thus the house of cards begins to collapse. 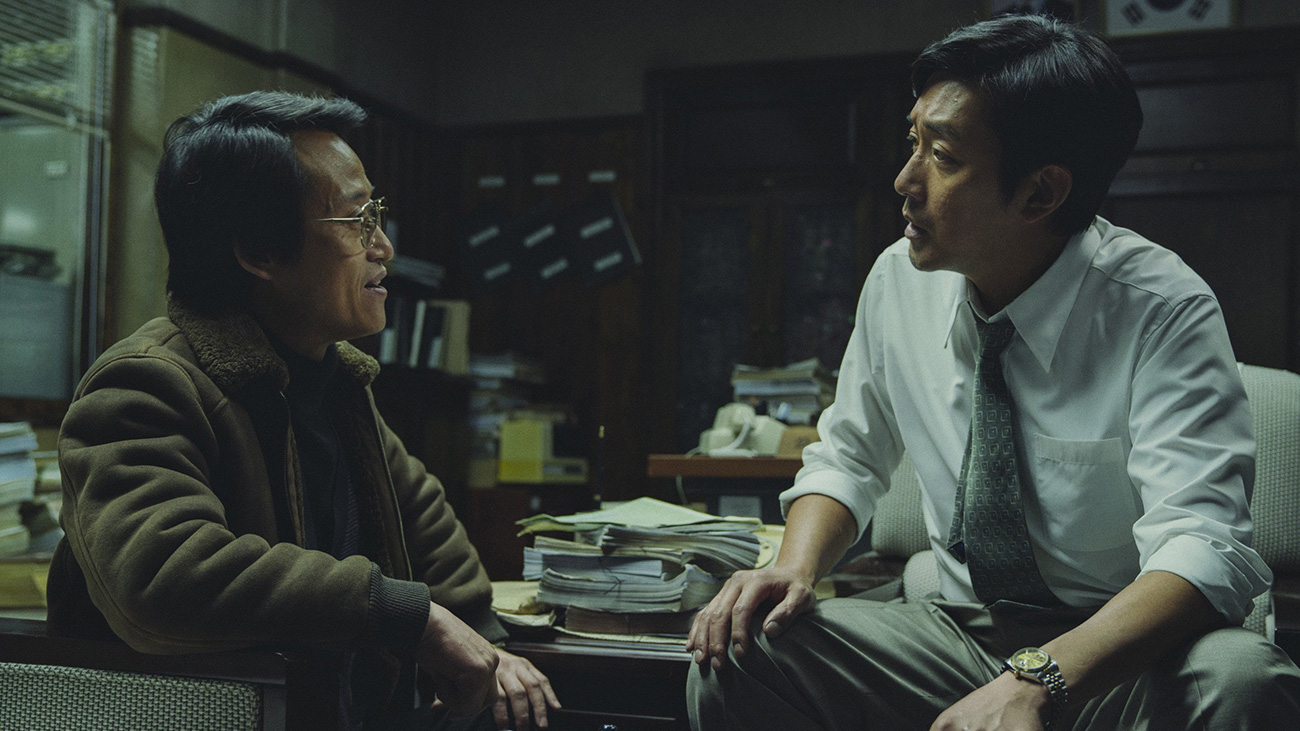 Park Jong-chul, the tortured student, is a household name in South Korea and 1987 tells us how and why. It’s the latest in a string of films, based on fact, that re-visit South Korea’s recent history and recount the struggle for democracy — A Taxi Driver (2017) and The Attorney (2014) being two excellent examples of similar pivotal political events.

1987 is a star-studded ensemble showcase where the Korean A-list and other great supporting actors are lined up for the film. This reflects the deep resonance of the story within the Korean psyche and must have been dream for Director Jang.

Moon Sung-kun, a veteran actor for Hong Sang-soo and others, grew up in a hot bed of politics, religion and resistance as the son of Rev. Moon Ik Hwan. His father was the famous and a very vocal leader of the pro-democracy movement of 1987 and beyond. Another very experienced actor with a first hand connection is Woo Hyeon who famously held the South Korean flag while leading the funeral march for murdered student, Lee Han-yeol. In the film, both Moon and Woo jump the fence, playing key villains on the government’s side.

Kim Tae-ri, last seen stunning audiences in Park Chan-wook’s The Handmaiden (2016), plays a naïve student who gets swept into the protests almost by accident. She meets and befriends the student Lee Han-Yeol (Gang Dong-won) in the weeks leading up to his death. Her uncle, played by Yu Hai-jin from A Taxi Driver, is a corrections officer who smuggles messages to and from political prisoners to the resistance outside. The information he delivers becomes pivotal in the government’s demise.

Other major names round out the ensemble cast, including Ha Jung-woo (Tunnel), Kim Yoon-seok (Haemoo) and Lee Hee-hun. Each have their own parts to play in the film’s cinematic retelling of South Korea’s tumultuous journey towards democracy. 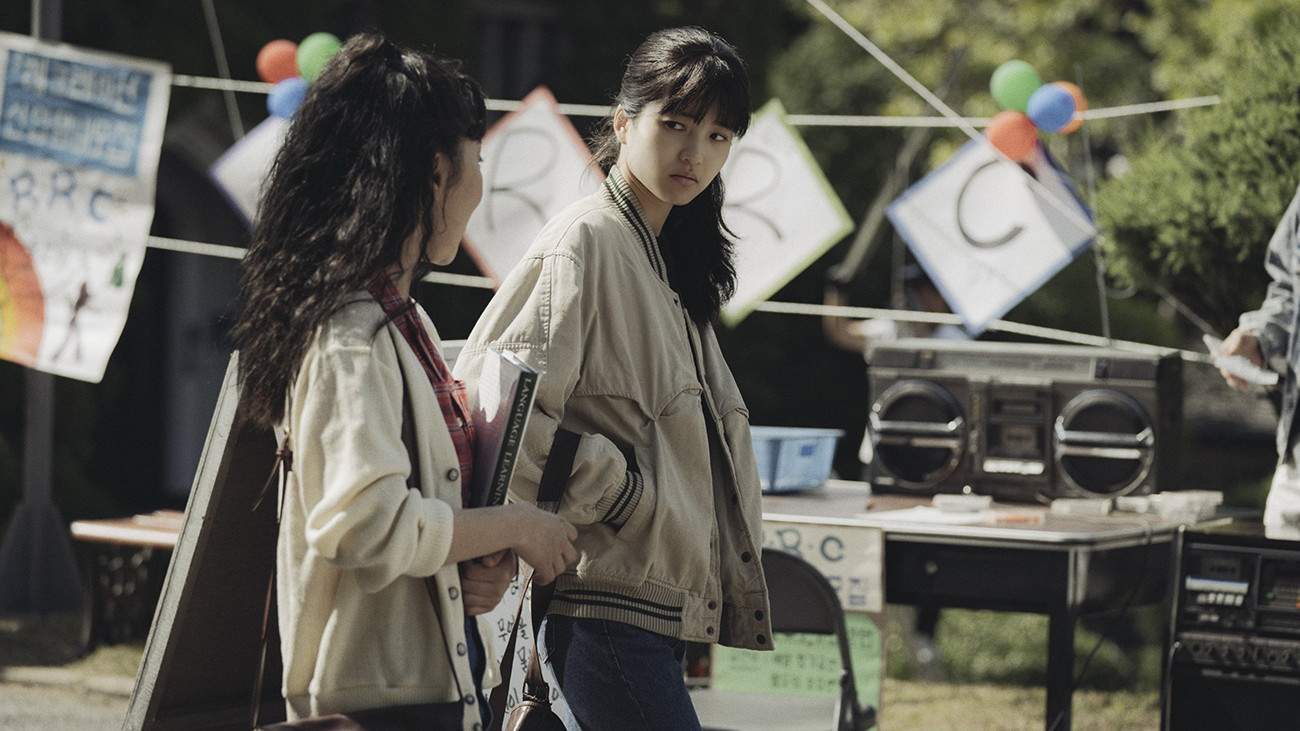 The amazing take home from this film is seeing how fragile the birth of a movement is, especially in the face of brutal resistance. Just through one person’s action, no matter what their motivation, a whole chain of events cascades out of control, again set off by individual acts and decisions. What if they had changed their mind? Would South Korea still be in the grips of a dictatorship that rivals Kim Jong-un’s? In a movement, everyone is a hero or they at least have that potential. Everyday people can become giant killers through simple acts of conscious in the face of dreadful outcomes. 1987 isn’t sentimental and doesn’t overplay events. There are some storylines that have been fictionalised but most of the film is brutally straightforward and based in historical fact.

Brace yourself for the end of the film after the story has finished, where stock footage shares the screen with the credit roll. There is nothing new about this device to stamp authenticity onto a film but the truth that it is stamping is a further wrenching of the emotions. In my viewing, stunned silence and weeping summed up the audience when the lights came up.

It was too much to leave during the credits, too disrespectful. 1987: When the Day Comes is not a pretty film but the brutal events that went down that year are etched in history. And for a new generation of Koreans born since, it will contextualise last year’s candle-light protests. For those who remember, perhaps it is satisfying to see how far they have come. As an outsider looking in however, this is yet another fascinating insight to the fiery birth of democracy in South Korea and a timely reminder of how young it is.