Why ‘Song Lang’ is almost a great queer romance

Song Lang, the debut film from Leon Le takes place in 1980s Saigon. Set against the backdrop of cải lương (modern Vietnamese folk opera) in its golden years, we watch as two young men on very different paths in life collide into each other and find a special connection. Dung “Thunderbolt” (Lien Binh Phat) is a fearsome debt collector working for Auntie Nga, a kind-faced but ruthless loan shark. One of his jobs finds him at a cải lương theatre, where he meets Linh Phung (mononymous Vietnamese popstar Isaac), the star of the opera troupe. Their first encounter is no meet-cute however as Linh attempts to pay the theatre’s debts after catching Dung dousing the troupe’s costumes in gasoline. Over the course of two days however, their second encounter leads them both down a path of self-reflection and an awareness that the connection between them is far more profound than they could have ever imagined.

The first thing any viewer will notice is how handsomely made and utterly ravishing the film looks. The recreation of the hot and humid streets of Saigon in the ‘80s on a limited budget is nothing short of a technical marvel. Saigon’s streets are bathed in lush colours, striking contrasts and golden light. Skin tones are rich and photographed through a nostalgic lens which also has a grit and grain that recalls cinema of the ‘70s. Colours bloom in the cải lương performances, juxtaposed against the almost noir-like qualities of the grittier scenes where Dung roams through the back alleys collecting money. The considered style and composition of many shots in the film speak of a piece of work created with a lot of love and care (DOP Bob Nguyen’s work is nothing like I’ve seen in recent years). Director Le’s love and respect towards cải lương and his Vietnamese heritage is also strongly palpable on screen. For the most part, the film is a nostalgic and wonderful celebration of a traditional art form that has largely been forgotten by today’s generation, according to Le, with some mistaking the film as one about Chinese opera. In telling his story, director Leon Le cited Wong Kar-Wai as an influence at the NYAFF premiere and is himself a fan of the Hong Kong filmmaker according to his DOP. It’s definitely a way to sell the film to anyone hesitant. But Song Lang is very much its own film, and DOP Nguyen’s restrained camerawork is more in the vein of Mark Lee Ping-Bin than the kinetic nature of Christopher Doyle’s in Wong’s early films.

In that spirit, Song Lang, is for the most part a very sensitive and delicate film despite its melodramatic set up. In its exploration of Dung and Linh’s unfolding connection, it is cautious and gives the audience a simmering slow burn—almost too cautious. So when the film reaches its climatic scene involving cross-editing between the tragic opera Linh Phung performs onstage and the tragedy unfolding to Dung offstage, it feels almost out of place. Sometimes when you watch a film, you can see the scene that the entire film is built around. This climactic finale seems like the set piece that the director wanted to show off, that the whole film was leading up to this. For all its build up, as an audience member I too wanted all that slow burn to boil over with a satisfying payoff. But not like this. This scene is melodramatic, operatic even, which seems ironic. It calls to mind Moulin Rouge!—think that climatic finale where Nicole Kidman’s Satine literally dies onstage while her character survives the musical, with the camera cutting between the euphoric reactions of the audience to the happy ending and the tragedy unfolding backstage. The operatic melodrama of Moulin Rouge! fits perfectly with its film but nothing about the rest of Song Lang that came before suggests a finale like this. Pacing-wise it seems rushed, almost as if Le and his co-screenwriter Minh Ngoc Nguyen did not know how to tie the film up; unfortunate given how measured the entire film that came before felt. 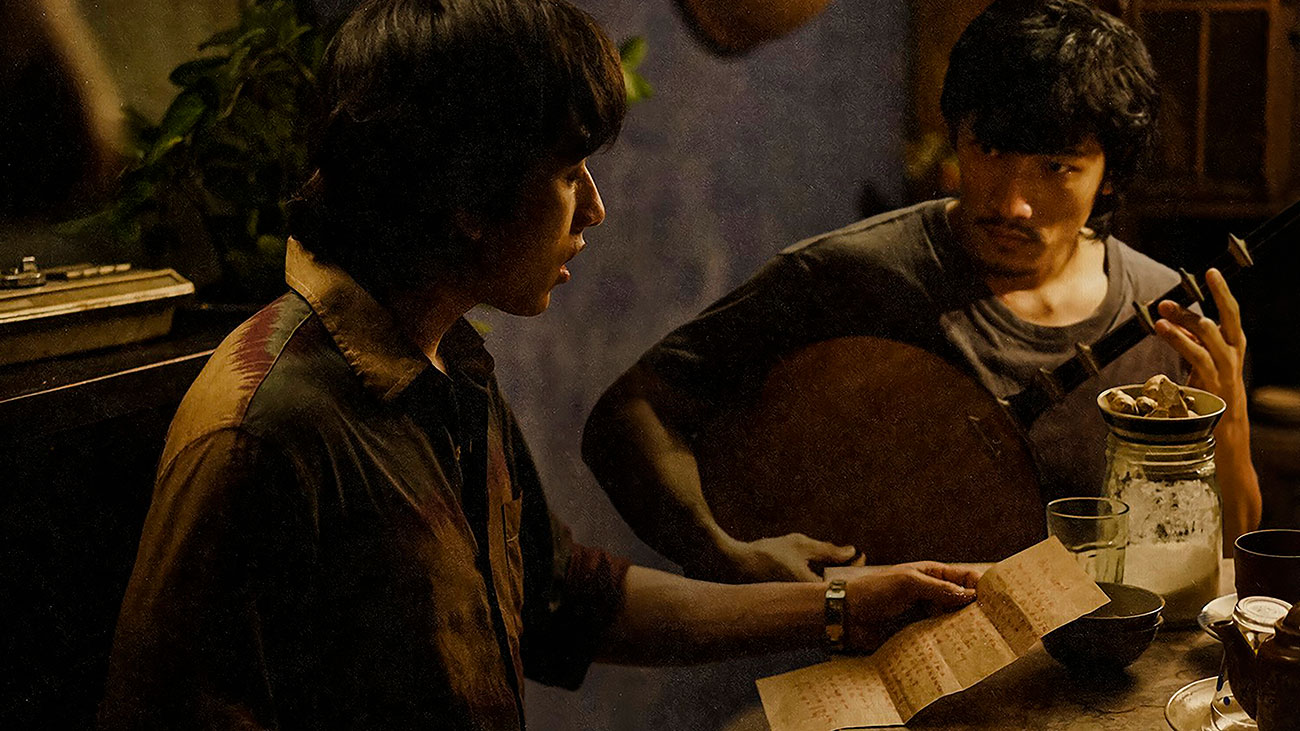 This rushed climax is also at odds with Song Lang’s themes. The film introduces the instrument song lang (“tap box” in Vietnamese) in its opening. It is an instrument used in cải lương to keep rhythm, and is used in the film as a metaphor for life. Dung has lost his way in life. Where he once played the đàn nguyệt (“moon lute” in Vietnamese), now he lives an aimless, day-to-day existence demanding money. Dung is so affected by his initial trip to the cải lương theatre where he first meets Linh Phung because of trauma in his past tied up with his parents’ professions as cải lương performers. Through Linh Phuong, he rediscovers cải lương and begins to reflect on his life choices. Dung comes to terms with his hurt, leading him on the path of redemption. His initial self-reflections take him to traditional sites of spirituality like churches and temples, but it is in his connection with Linh Phuong that nudges him back to a path he once walked. Linh Phuong, after hearing him play the đàn nguyệt, asks him to audition for their opera troupe. It is a ray of hope, the chance for Dung to find his rhythm in life again. Hope and redemption seem to be two major themes. While Linh’s connection to these themes seem less pronounced, he comes out of his shell as he confides in Dung. In Dung he finds the hope of someone who understands who he is and lets him be. Through this newfound emotional vulnerability, he is able to grow as a performer and artist. So when tragedy strikes in the final act, it is so abrupt that there is no real closure for its characters, its themes, or its audience. Most stories are about answering a single question thrown around from the beginning. The question that Song Lang raises throughout its film—on whether Dung can find hope and redemption again—is never really given a satisfactory answer. Perhaps it was too late for him then? It seems cruel to give him this hope, hope that he could walk a new path alongside Linh Phuong, only to take it away. It makes me wonder what this might mean for queer Asian audiences? 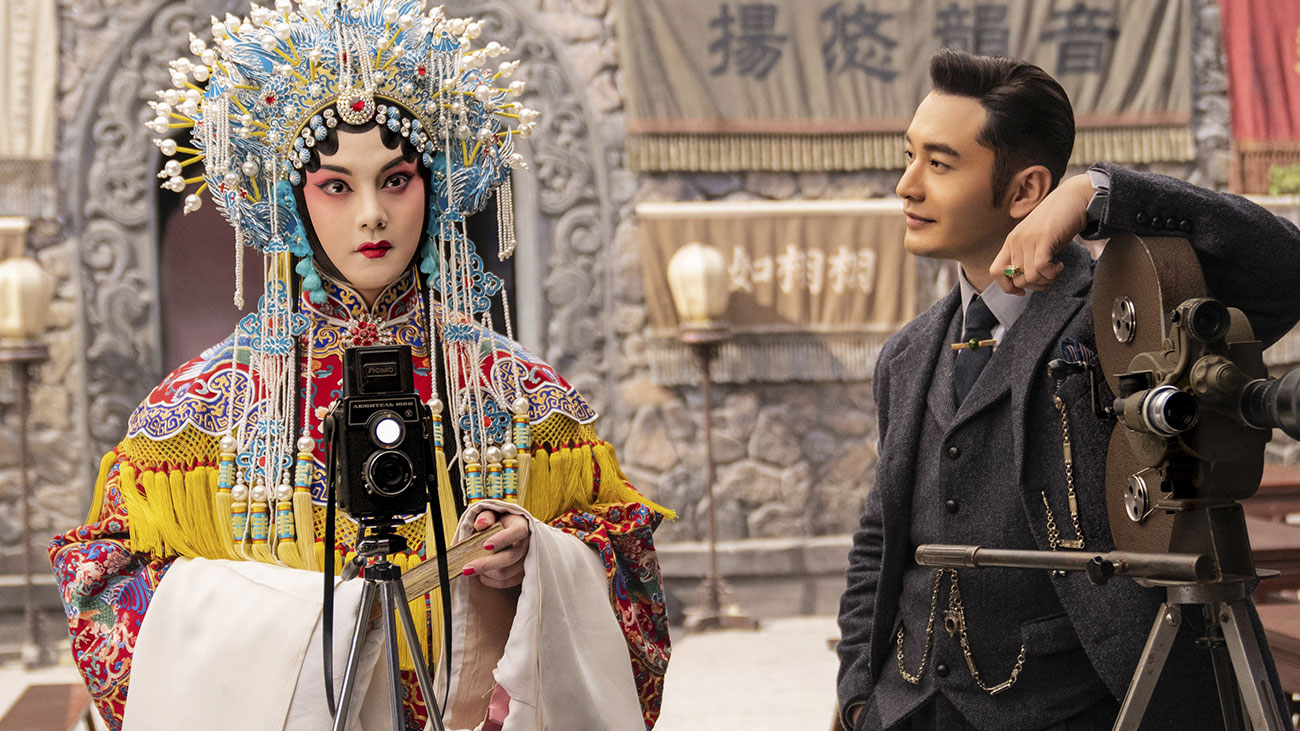 Chinese drama ‘Winter Begonia’ shares some similarities to ‘Song Lang’ but it feels more rounded in its romantic portrayals.

Perhaps I am projecting—projecting the need for less tragic, unfulfilled stories of queer romance. Perhaps I am also increasingly dissatisfied after years of reading and watching content featuring queer-coded characters or relationships that are never canonical or made explicit. Director Leon Le stated that, “with Song Lang, I wanted to make a film where the leading characters didn’t have any physical contact so maybe the audience can simply view them as people.” But why? Queer people should be viewed as people no matter how they are. As someone who is all too fond of a period romance, where a simple touch of an ungloved hand is so sexually charged, I understand deeply the power of restraint in depicting intimacy between people on screen. But I also don’t believe in taking away physical intimacy just to stay away from ‘stereotypes’ of the genre, which director Le also gave as a reason regarding the lack of physical contact between his characters. And in discussing stereotypes of LGBTQ cinema, isn’t ‘Bury Your Gays’ a more harmful stereotype? Personally, I think it’s healthier to challenge a heterosexual, cis white audience, instead of having to make queer Asian-ness palatable by sanitising it.

Even if we were to ignore the lack of physical intimacy depicted on screen, it returns to how the film fails to answer its own questions. Shortly after my first watch of Song Lang in February, the Chinese drama Winter Begonia premiered. Set in the world of Beijing Opera, it is similarly about an unexpected connection formed between the star of an opera troupe, only this time with a Western educated businessman. The central question the story poses is for its opera star—will he choose his art over life? His answer at the start is that he will always choose his art, even if it jeopardises his life. But over the course of the series as his relationship with the businessman develops into a soulmate-like bond, we as an audience can see him wavering in his convictions, because he has found something, someone, even more important. The story concludes with an open ending. The question is never fully answered. But it keeps trying to answer it, right up to the very end. The novel the series is based on was originally published in the danmei genre1 Danmei/耽美 (dān měi) literally: ‘indulging beauty’ is a genre of literature and fiction media from China. The key element of the genre is a romantic relationship between two male characters. It can be considered the Chinese equivalent to the BL (Boys Love) genre in Japan. , so it is canonically queer. Chinese censorship kept the story from making the relationship explicitly queer, but the depth of the relationship between the two men is explored to its full potential. If taking out the physical was to focus on the emotional, Winter Begonia successfully did that. And in fact, physical intimacy doesn’t have to be sexual; it can be affection and care. And this is why I question the ways in which Song Lang is almost too cautious and restrained, almost as though it is holding back, playing it safe. So when even the figurative tension is released within the film’s climax, it rings false. 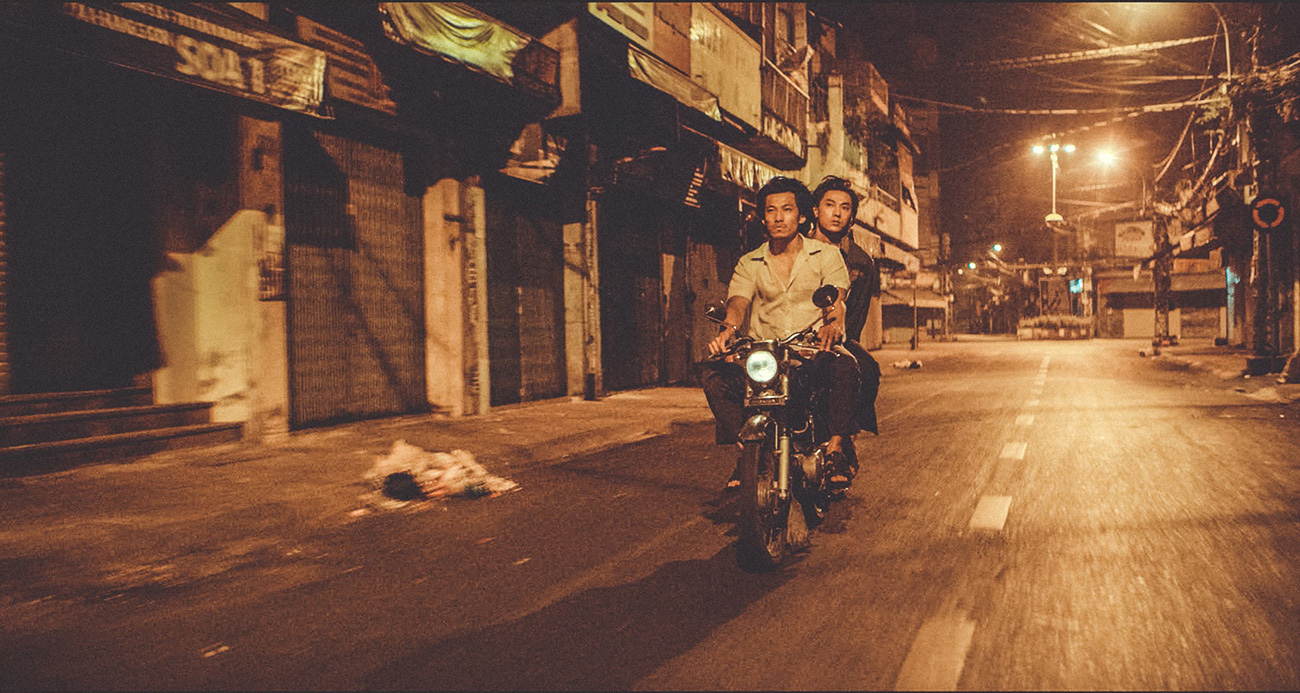 Sometimes the film you set out to make is not the one you end up making. Leon Le cites Wong Kar-Wai as a major influence, but Song Lang is very much “a Leon Le film”. His voice is very much evident in this piece, and he shows great promise as a filmmaker. But one of the most interesting aspects of Wong’s filmmaking is in his willingness to throw away the script and improvise scenes on the day itself. It can be a chaotic, maddening process, as documented through Filmed in Ether’s own In the Mood for Love video essay, but the results show. Wong’s films always feel vibrant and organic, even in a restrained piece about repressed longing like In the Mood for Love. On the cutting room floor, Wong is willing to cut out whole characters and setpieces after realising the film he is making has developed into something else. I’m not saying directors, or even Director Le should work like this, but I do think it pays to be less precious about the ideas you start with and let your characters and the journey they take inform the final outcome.

In the strive to tell a ‘nuanced’ story of queer relationships, Song Lang might not reach its full potential but what it does offer is an opportunity to consider what restraint really means in romantic LBGTQ+ storytelling. When I think about some of the best queer romance films in recent years, I think about films like Park Chan-wook’s The Handmaiden (2016), God’s Own Country (2018) and Portrait of a Lady on Fire (2019). The connection between two people in these stories often represents hope. Even if the story revolves around something else (a con, like in The Handmaiden), that two people can find an understanding in each other, share something about themselves that no one else has ever discovered—that, in itself, no matter how fleeting, is a moment of freedom. As LGBTQ+ people are often still searching for acceptance in many cultures and societies, hope is something that we often need.