Editor’s Note: Changes to wording have been made to more accurately reflect Akihiko Shiota’s involvement in the soundtrack for Farewell Song.

Within the broad landscape of Japanese youth films, Akihiko Shiota has crafted his own niche. Shiota’s portraits of lost adolescents are often characterised by a detached, unceremonious presentation and cynical outlook on human behaviour. This is evident since his feature-length debut  Moonlight Whispers, an eye-opening examination of sexual desire, loneliness and imbalanced relationships in teenagehood.

With Japan Society’s Flash Forward program showing a double bill of Shiota’s Harmful Insect and Farewell Song, we look at how his directing style opens up varying contemplations on the futility of overcoming life’s obstacles. 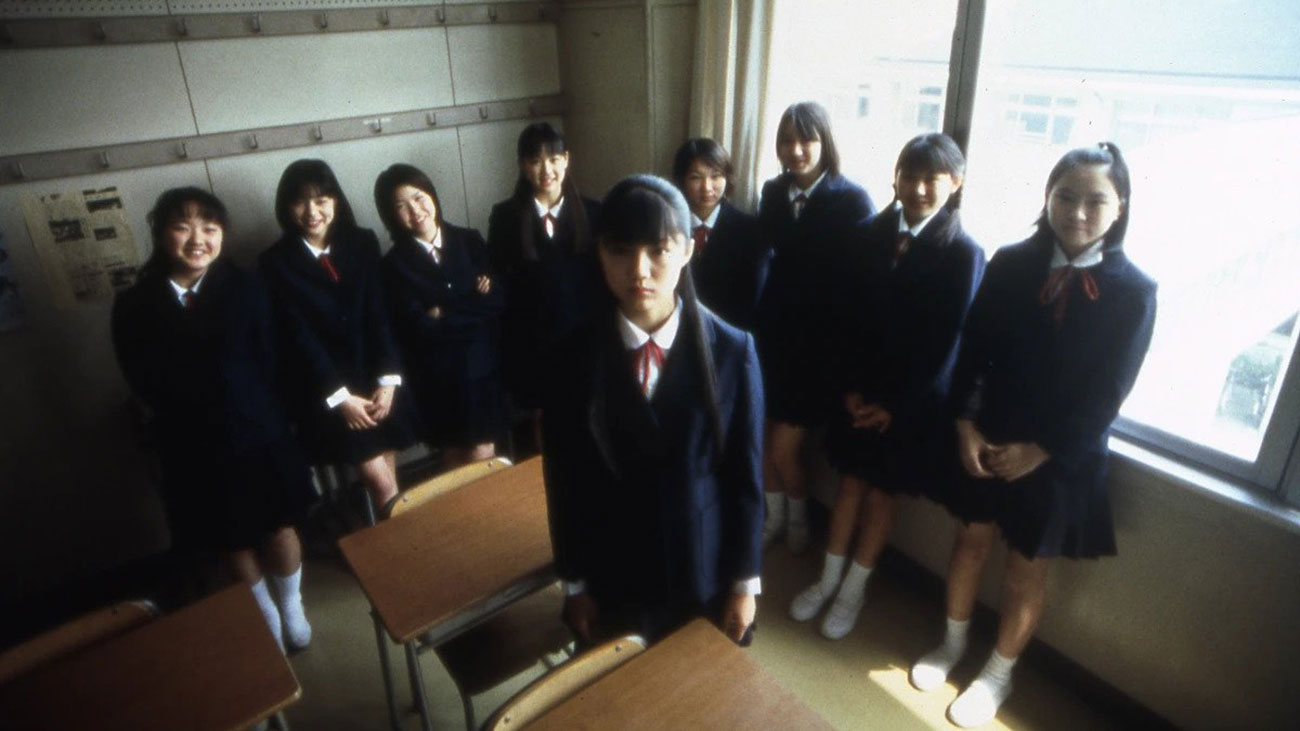 Released just two years on from Moonlight Whispers, Harmful Insect unsettles with its depressing chronicle of a young girl’s misfortunes. Its story is made all the more heartbreaking thanks to the powerful performances of its young cast headed by Aoi Miyazaki and Yu Aoi.

Middle-schooler Sachiko (Aoi Miyazaki) has experienced pain far beyond her years. With an absent father and an unstable mother, her home life is far from comforting. School, when she attends it, is not much better. Classmates gossip about Sachiko’s family and romantic relationship with a teacher, with only Natsuko (Yu Aoi) showing her any kindness. Though Natsuko tries her best to befriend and encourage Sachiko, she is met with resistance. Instead, Sachiko finds more solidarity with her older scam artist boyfriend and their homeless friend, dwelling at the fringes of society.

Despite the rather shocking story written by Kiyono Yayoi, Shiota’s understated direction of both the mise-en-scene and his young lead is far from exploitative. In fact, he imbues Sachiko’s outcasting and trauma with a sense of resignation and almost banality. At school in crowded classroom scenes, Sachiko is noticeably still with her eyes down amongst a sea of laughing and fidgeting children. Even when she finds her suicidal mother breaking down in the middle of the night, her unblinking gaze suggests it’s a sight she has become used to.

In an interview, Miyazaki explained that Sachiko’s emotional withdrawal from her surroundings is a survival mechanism, saying: “Although Sachiko looks like an adult, she is not one on the inside, [but] she is forced to live like that.”

Yet despite her attempts at what she perceives as maturity, Harmful Insect constantly reminds us that Sachiko is still a thirteen-year-old girl. Sachiko only ever being in a school uniform, a letter from her teacher telling her she should be “dating boys her own age”, and Natsuko shouting that they are “only in seventh grade, why does [Sachiko] have to suffer so much?” are the most obvious examples.

But there are also the actions of Sachiko herself. It is the small moments where her stoic exterior is broken – most happily, when she smiles at a cute dog or talks to a neighbourhood child; and more frighteningly when she escapes the grasp of predators. The fragility of her veneer is most vivid when she burns down her family home in a short-sighted act of rebellion and catharsis. Initially Sachiko is beaming in delight as her home starts to catch alight. But as the magnitude of what she has done dawns on her, she sheds tears for the first time. Enveloped by darkness with only the flames of her home illuminating her face, cuts and cinematography are used to great effect to emphasise her loss of control. Sachiko backs out of the frame, only for her to be re-captured by an even closer lens, each cut seeing her more outwardly distraught.

As the film reaches its quietly devastating conclusion, it seems Sachiko’s future is unlikely to improve. But now, Sachiko’s navigation of a world dangerous to young girls is no longer met with naivety or avoidance, but rather an understanding that life is unfair. Miyazaki’s subtle performance as Sachiko leaves her hometown says it all – in just a few seconds, her eyes turn from fear and regret to tepid acceptance. There is little hope for Sachiko, and with such a persistent defeatist tone until the credits, Harmful Insect stirs a similarly affecting sense of hopelessness in viewers.

Nearly two decades on from Harmful Insect, Shiota’s 2019 music-filled Farewell Song is a surprisingly commercial and comparatively upbeat entry compared to the rest of his youth film oeuvre.

We first meet indie darling band HaruLeo at the end of their journey, heading off on one last tour before they go their separate ways. Composed, fittingly, of singers Haru (Mugi Kadowaki) and Leo (Nana Komatsu), the band journeys across Japan with their manager Shima (Ryô Narita). As they tour, Haru, Leo and Shima reflect on their relationships, digging up a long-standing love triangle they swore to never act upon.

Despite its road trip structure providing the perfect symbolic basis for transformation, Haru and Leo are instead a stubborn continuation of Shiota’s fascination with stasis – albeit with a much different outlook.

Farewell Song utilises its soundtrack as dialogue to explore the nature of HaruLeo’s relationship. In the song ‘Farewell Lips’ (also the film’s Japanese title), the interplay between singers shows HaruLeo’s perspectives on their missed opportunity at romance. It’s not exactly subtle when it comes to Haru’s regret either – with lines such as “My temperature was rising, and I think you could tell. So instead of opening my eyes, I hesitated”, and “I’m fine with this thorn staying stuck inside me, because it’ll always remind me of you”.

Between each repetition of the song, Shiota reveals more of Haru and Leo’s complicated relationship through flashbacks, with ‘Farewell Lips’ itself even appearing in a recollection of the beginning of HaruLeo. When it is time to say farewell to HaruLeo at their last show, their final performance of ‘Farewell Lips’ is presented with Shiota’s characteristic lack of fanfare, rather than the kind of jubilation or melancholy one might expect.

Ultimately though Farewell Song finds comfort in the familiar. The ending at first feels like a betrayal of the finality its premise hinges on (to the point that it is jokingly acknowledged in-film). But when one considers the film’s consistent rhythm from venue to venue, HaruLeo’s dedication to finishing the tour, and optimistic lyrics on perseverance (particularly in ‘Tachimachi Arashi’), it becomes clearer that it is their time with each other in the present – not the end – that really matters. What that means for HaruLeo is unclear, but their carefree attitude and happy singing in unison suggests they’re willing to endure any pain in order to continue together.

Despite taking very different paths narratively and tonally, Harmful Insect and Farewell Song both reach the same conclusion: life goes on – for better and for worse. Whether optimistically or oppressively, there is no escaping from life’s unpredictable course for the youth in Shiota’s films. All one can do is accept the known and unknown and keep going on.