Interview: Makoto Nagahisa talks ‘And So We Put Goldfish in the Pool’

With boundless energy bursting from nearly every shot, one of the year’s best short films is And So We Put Goldfish in the Pool, the debut film from Japanese writer-director Makoto Nagahisa. Currently available to view for free online, the short film first garnered attention at Sundance Film Festival 2017 where it was awarded the Short Film Grand Jury Prize.

Set in Sayama, a city located in the Saitama Prefecture in Japan, the short is splintered into chapters and captures the everyday malaise of four young girls stuck in a dead-end town with humour and imagination. Gorgeously shot, Nagahisa’s short doesn’t try to tell a story in the traditional sense. Instead, he maximises the film’s visuals and sounds to orchestrate an entire experience that you lose yourself into, resulting in a short that is both arresting and at times, unforgettable.

We caught up with Makoto over email (his answers translated by Sandra Berghianu) to talk about his award-winning short film, the influence Shin Godzilla director Hideaki Anno has had on him, the songs he felt resonated with his own youth and more!

It’s incredible to know the inspiration for your short came from a news story you saw on Twitter. What did you see in that original tweet that made you think that this was a story that needed to be told?

“400 goldfish in a swimming pool. Guilty: 15 year-old girls. Thought they would ‘look pretty’.”

This is the short text which led me to find out about this event. The text became known throughout Japan, but it only gave a simplified explanation for the girls’ actions. I felt the real motives weren’t explained in the text, and were not understood by anybody. And so, an impulse led me to depict these motives.

Not a single frame in your film feels wasted, even when you switch to using phone cameras, surveillance cameras or what looks like Go-Pro cameras. Were there any other types of cameras you considered using for this film?

For the scene where the camera flies through the air, we threw an iPhone and used the ‘slo-mo’ function. If I could find a smaller camera, I’d love to use one. Like the one they use in your stomach.

Your short is able to maintain an extremely infectious energy the whole way through. It really feels ‘alive’ despite the lack of freedom these young characters experience. Do you think this energy is only possible because your film is a short? Or do you think modern filmmakers need to be much more creative in telling their stories?

I think it’s possible to maintain this energy throughout a feature. That’s why I’m working on an even more energetic feature film at the moment. I feel that recent films have a narrative which is too well-constructed, and they tend to lose the energy. I think people’s feelings are stirred by things unconnected to stories, so I’d like to see more filmmakers explore other methods of creating images which move people’s feelings, not just the storyline.

The story moves like as though it’s being told through someone’s stream of consciousness, bouncing from one thought to the next. Yet this also feels like a direct contrast to how you approached film, as you’ve previously said in interviews that your short was all planned out to the point that a ‘prototype’ film was made beforehand. Did you ever want to be surprised during filming? Or do you prefer not leaving the creative process to coincidence and chance?

Rather than include many people’s feelings or experiments, I believe that depicting a materialisation of a single person’s brain helps create a film with more freedom. (Of course, this doesn’t mean I dislike nice surprises during filming or rehearsals. They’re welcome.)

However, fundamentally, in order to create a unique piece, I think it’s important to construct the storyboard and scenes by constantly having a conversation with yourself, even if others don’t understand you.

You’ve previously cited Hideaki Anno as one of your artistic inspirations and fans of his work will no doubt find elements of Anno’s films, especially Love and Pop, embedded in your film. What is it about Anno’s approach towards filmmaking that you admire in particular?

I respect Mr. Anno’s live-action films for not being caught in the web of ‘beautiful’ imagery. It’s fantastic how he doesn’t pursue superficial beauty, chooses his cameras freely, and can’t be categorised into stereotypical cinema.

In researching for this interview, I noticed that you were promoting your short film at an event with writer-director Daigo Matsui whose last few films have felt very similar to your own short. What’s your relationship like with him?

I met Mr. Matsui at a dinner party about five years ago, before I had made any films. We had exchanged a few emails, and that was it until this event. Maybe we’re rivals. I think both of us want to express the same ideas in our films (for example, the importance of the present moment). But our approaches, as well as the depiction of important characters, and his cool-headedness feel very different from what I do. That’s why I’d like us to keep working in our own ways, and have an opportunity to discuss again. 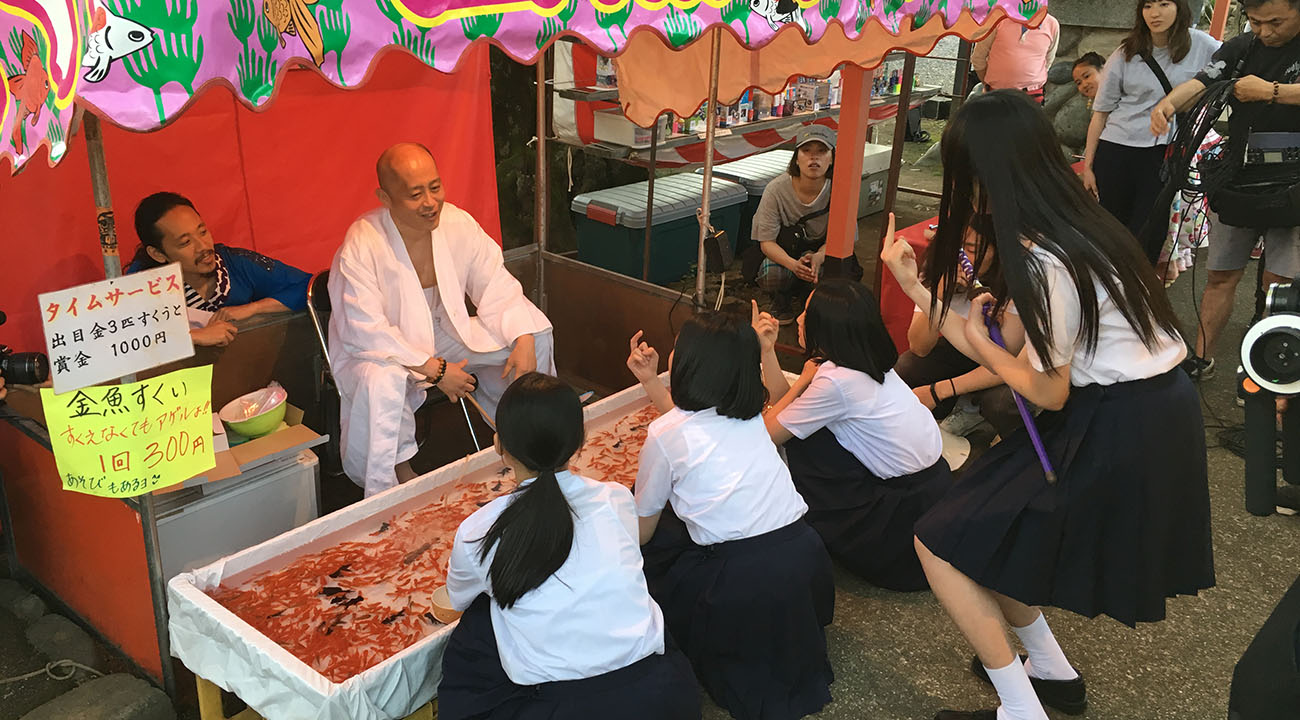 Chisato Moritaka’s song ‘17’ is the anthem of the girls in your film and I think most people who’ll see your short won’t be able to get that song out of their head afterwards! For yourself however, which songs remind you of your own youth?

‘17’ is a cover by Chisato Moritaka, and it’s actually an older song. It’s been sung throughout recent times in Japan.

My youth was all about punk and jazz. As jazz, I used to play a lot of Gil Evans Orchestra. Their music taught me that people’s feelings aren’t moved by logic, but by sudden yet calculated discordance. As for punk, I was a huge fan of Scafull King. Like them, I want to create films which can be physically enjoyed by the audience.

That’s probably because Japanese filmmakers have a young mental age. Many people feel like they’re under 20, when they’re already over 30 years old. It’s both a problem and a good thing.