A film from director Naoko Ogigami is always a treat. Known for making “iyashi-kei eiga”, or “films that provide emotional healing”, her films are characterised by offbeat and sometimes absurdist humor, idiosyncratic characters, but above all, deep humanistic sensitivity. As with all her films, she has both written and directed Riverside Mukolitta, adapting it from her own novel. The film sees many familiar recurring motifs from Ogigami’s films: a newcomer arrives at a new place and gets to know the colourful characters that make up the place, unexpectedly forming meaningful connections with them. 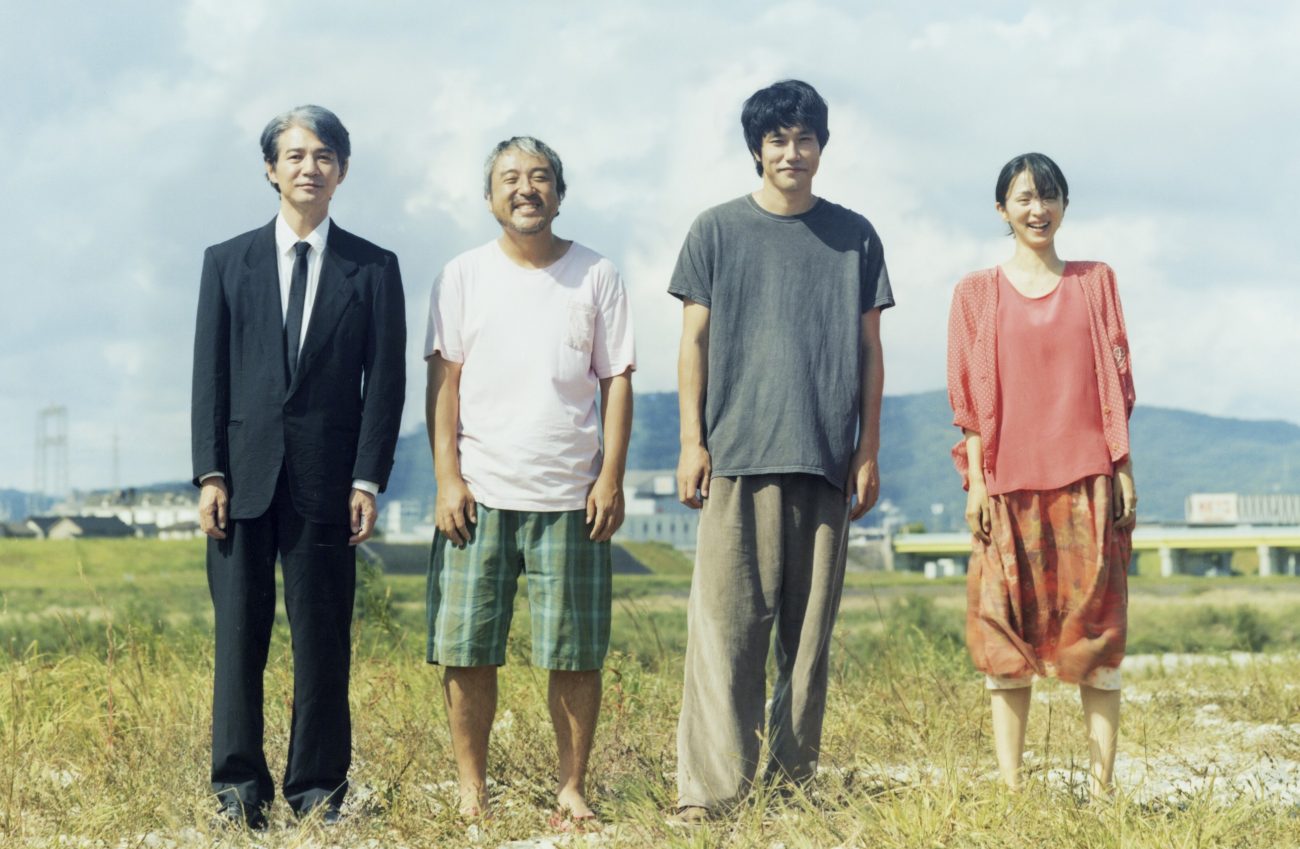 Our newcomer in Riverside Mukolitta is Takeshi Yamada (Kenichi Matsuyama), an ex-con who arrives at a quaint rural village in the Hokuriku region to work at a shiokara (salted fish paste) factory. His kind boss arranges lodgings for him at the nearby Mukolitta Apartments, whose landlady is the young widow Shiori Minami (Hikari Mitsushima). One afternoon, eccentric self-declared “minimalist” neighbour Kozo Shimada (Tsuyoshi Muro) barges into Takeshi’s life to use his bathroom and later takes more liberties with Takeshi’s personal space including eating his rice and insisting he help with his vegetable garden. Meanwhile, Takeshi also gets to know the village’s door-to-door tombstone salesman and his son, the local monk and his landlady.

Riverside Mukolitta is notably a heavier film than Ogigami’s previous works, with its chief theme being death. Grief, depression, guilt, regret and unprocessed trauma haunt the residents of Mukolitta Apartments as they grapple with their own ghosts. If this sounds like a sombre departure for those familiar with Ogigami’s light-hearted work, fret not. Ogigami’s writing deftly wields these themes with great discernment, keeping her signature sense of humour while showing new textures to her writing and characterisation of people and relationships. Community and simple acts of kindness such as sharing a meal become little acts of salvation, allowing many of the characters to experience warmth and healing.

With its frank attitude towards death and embracing everyone’s unique ways of grieving and processing loss, Ogigami has created yet another one-of-a-kind story. We caught up with her just before Riverside Mukolitta’s North American premiere as part of the Japan Society’s The Female Gaze programme highlighting women filmmakers. 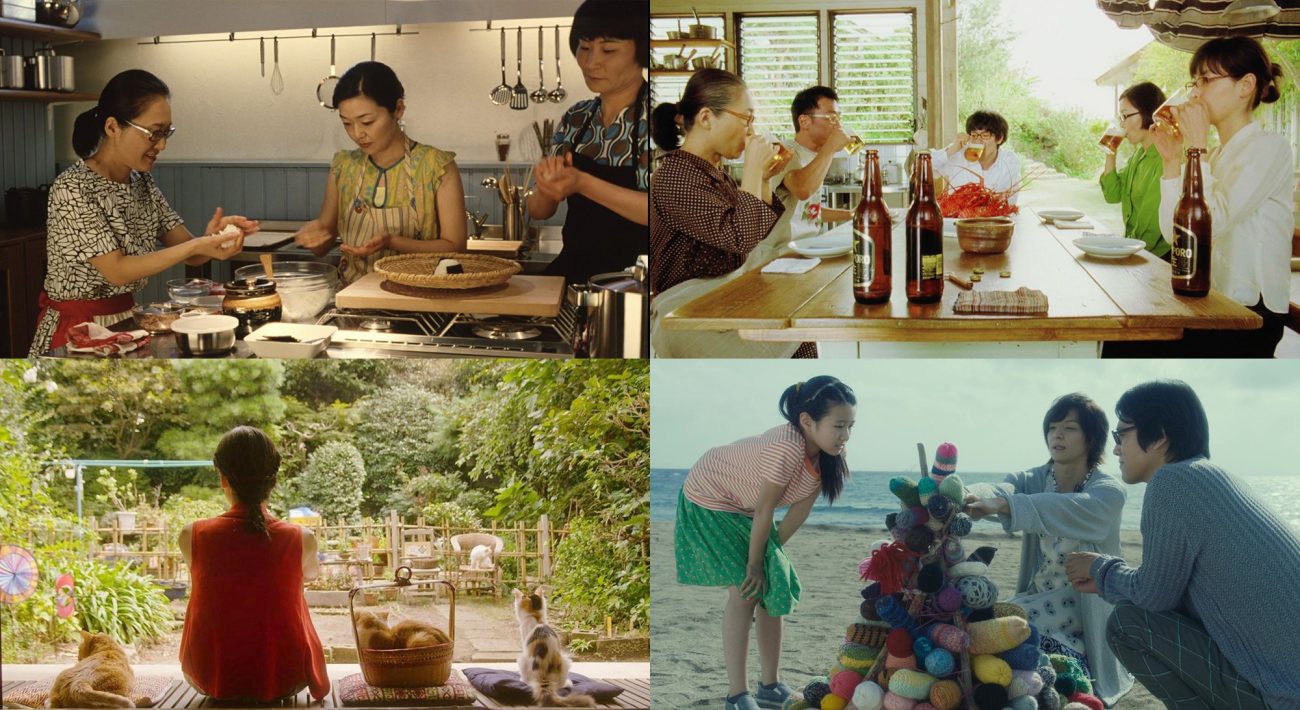 Congratulations on the premiere of Riverside Mukolitta in America! In Singapore, where I am from, your films Kamome Diner (2006), Megane (2007), Rent-A-Cat (2012) and Close-Knit (2017) have been screened here before and they have all been very well-received. Have you noticed any differences in the reactions to your films from audiences in different parts of the world?

You write the scripts for all your films, but this was the first film that was adapted from your own novel into a film. Was it easy adapting your own work for screen, or how was it different from writing a script straight away for screen?

Actually, I finished writing the script in 2018, and I started preproduction with a producer from a movie  company which is pretty famous. But we had a big fight about casting. And then the project collapsed. I was really angry, and I could not sleep for three days, I could not do anything but curse the producer. I woke up on the morning of fourth day, and I started writing the novel. 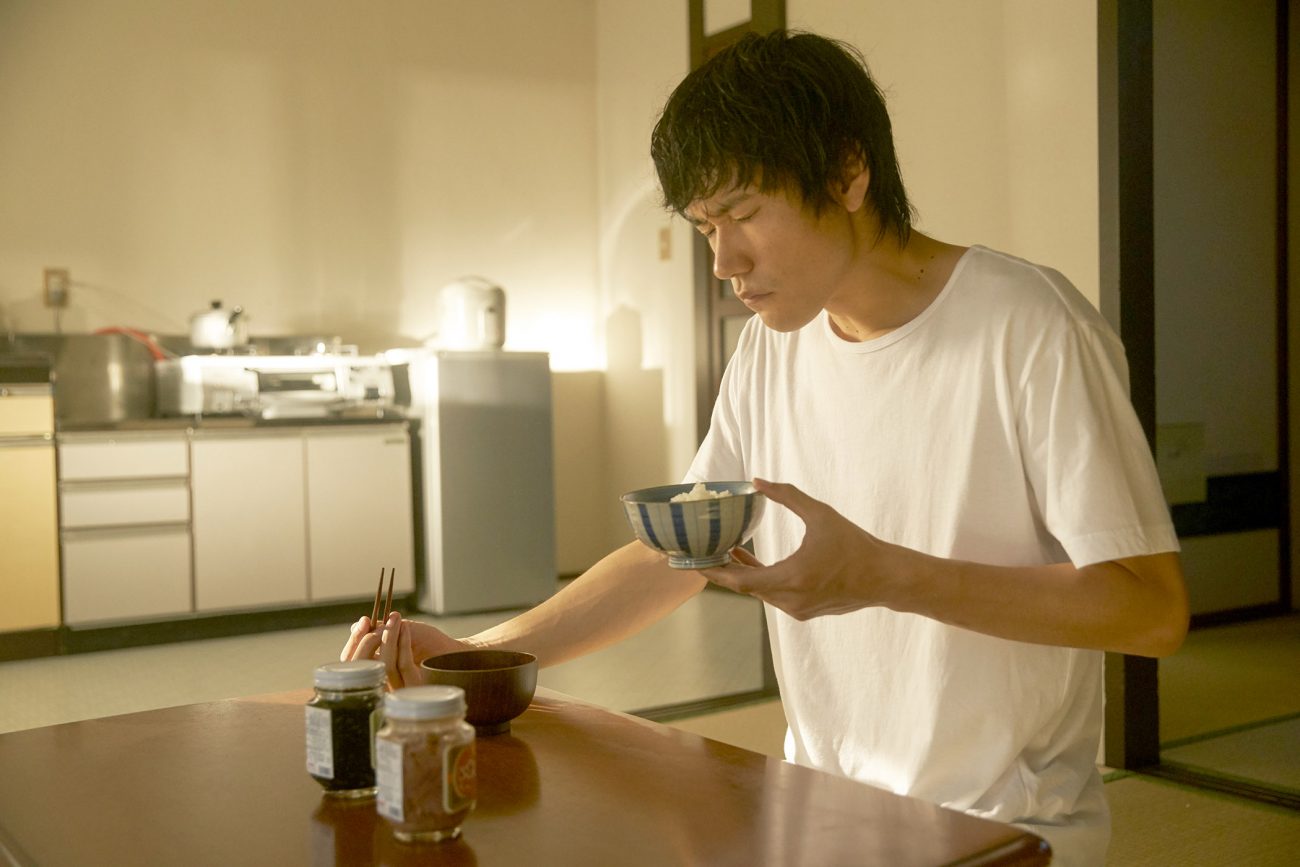 Casting Kenichi Matsuyama was a fateful encounter. Right after I finished writing the script, I went to Udine, Italy, for the Far East Film Festival. At dinner, on the day I arrived, Kenichi Matsuyama was sitting in front of me. We enjoyed our meal together. At that moment, I decided that he was the only person I could see as the main character in this film.

I knew Hikari Mitsushima has some special charm as an actress. I have been wishing to work with her. 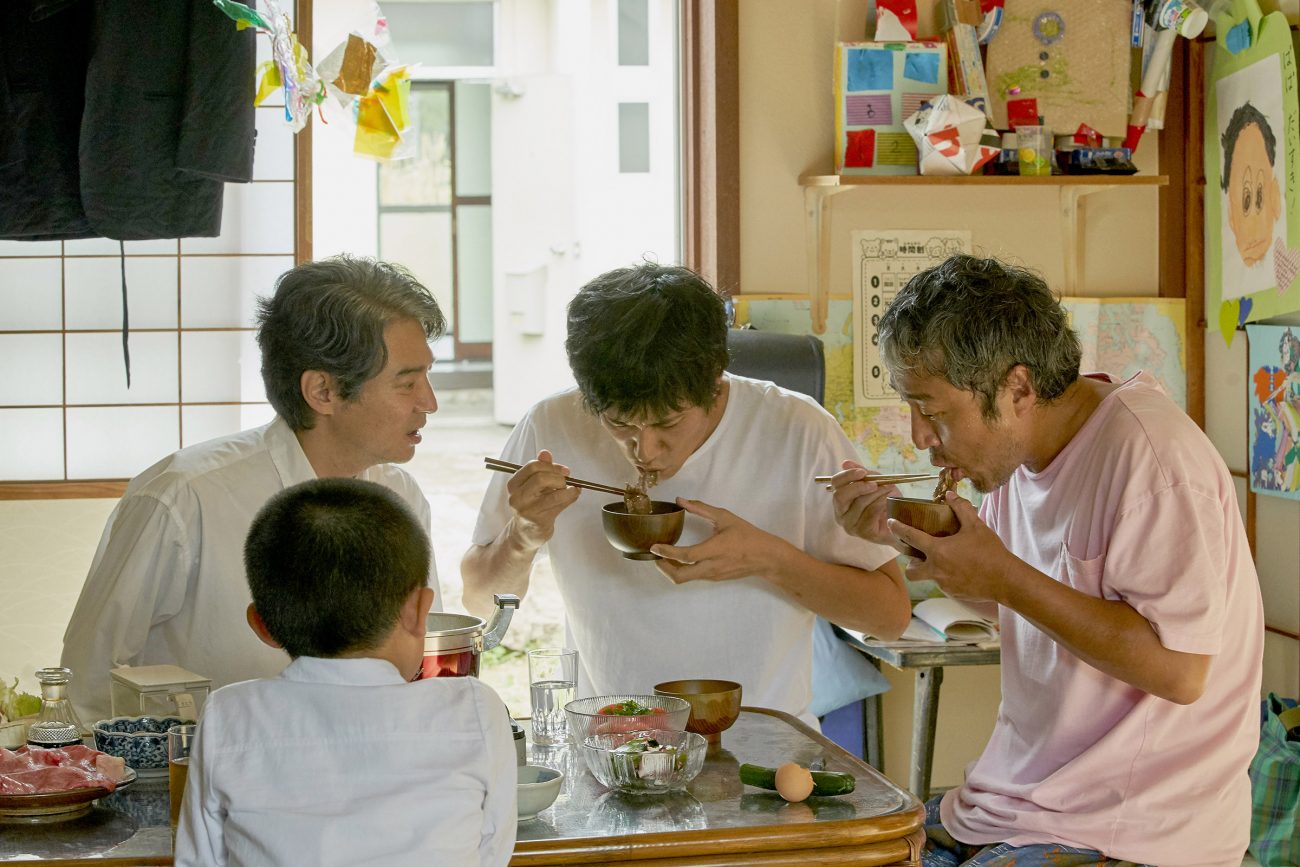 I always want to make films about people’s daily lives. Most people eat food three times a day. Therefore, it is inevitable that the meal scene comes into play.

Shimada in this film needed to be brazen enough to step into the mind of the protagonist, who is willing to die [Writer’s note: The protagonist Takeshi Yamada is implied to be suffering from depression]. I thought that growing vegetables in the field and eating meals together were the most natural tasks that two people could do together.

Riverside Mukolitta deals a lot with death and how living people cope with the loss of loved ones. It can be a very uncomfortable topic for many in all cultures. What made you decide to tackle this topic and turn it into a film?

I happened to watch a TV documentary about solitary death (dying alone), there was a scene where many ashes (remains) are lined up on the shelves of the city hall just like the scene in my film. The image was very shocking to me. There are so many forgotten people in Japan. I wanted to make a film about them.

There are many quietly powerful scenes in this film, such as the scene with the flying kite, and the sukiyaki scene. But my favourite is the one of Shiori and the bones. It is both sad yet very beautiful in showing how deep Shiori’s love for her husband is. How did this scene come about?

I have heard that some people consume the bones because their beloved has died and there is nothing they can do about their love. I wanted to express that in the film.

“End of summer” is quite a popular time of the year for Japanese directors to set their stories in, and it has almost become its own genre. Why did you choose to set your story at the end of
summer and what is unique about this period of time in Japan compared to the rest of the world?

Summer is the season for Japanese people to mourn the dead. In recent years, however, summer has also become a season of high death tolls due to rising temperatures. Hot summers have become dangerous. I have set the stage for a summer that is not only beautiful. 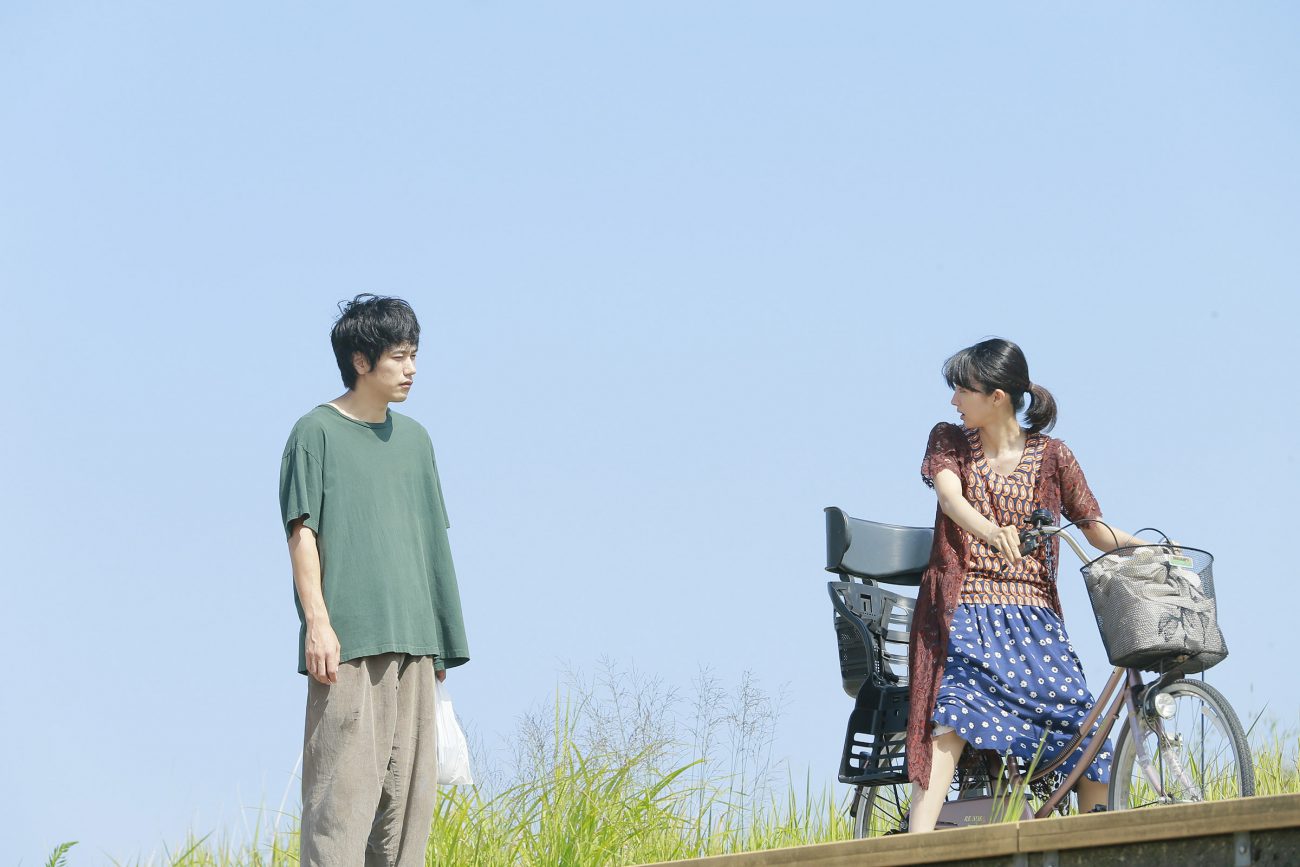 Your films always look very calm but also vibrant at the same time. This film, in particular, had a very high contrast look with lots of deep shadows and bright colours. Did you do anything differently in how this film was shot compared to previous films?

I am not particularly aware of this, but perhaps it is due to the fact that I am getting older myself.

Your characters are all very memorable, but an unexpected one was Tsutsumishita, the clerk at city hall. Civil servants are usually portrayed humorously in movies, and can be quite dull or mean. This character was very kind and patient. How did you come to develop this character?

When I was writing my novel, I researched city hall employees. All of the employees who dealt with death were very kind and dedicated to their work.

What is the message you would like for people to take away from Riverside Mukolitta?

I think I make films because I can’t put it into words.

What are you working on next?

It is a secret. It is already finished and will be delivered to the audience next year.