Arguably among the most recognisable working filmmakers from Asia, South Korean director Bong Joon-ho has become renowned for instilling genre pieces, such as kaiju film The Host or the procedural thriller Memories of Murder, with a mixture of humour, emotion, and social commentary.

Director Bong’s latest film, the Netflix-distributed Okja, continues this tradition. Following a young girl, Mija (An Seo-hyun), who travels to New York city to rescue her ‘super pig’ best friend, Okja provides a blockbuster experience along with commentary on almost everything from the ethics of genetically-modified food to capitalism. We briefly caught up with director Bong, who was accompanied by translator Jason Yu, during the 2017 Sydney Film Festival to talk about the film. 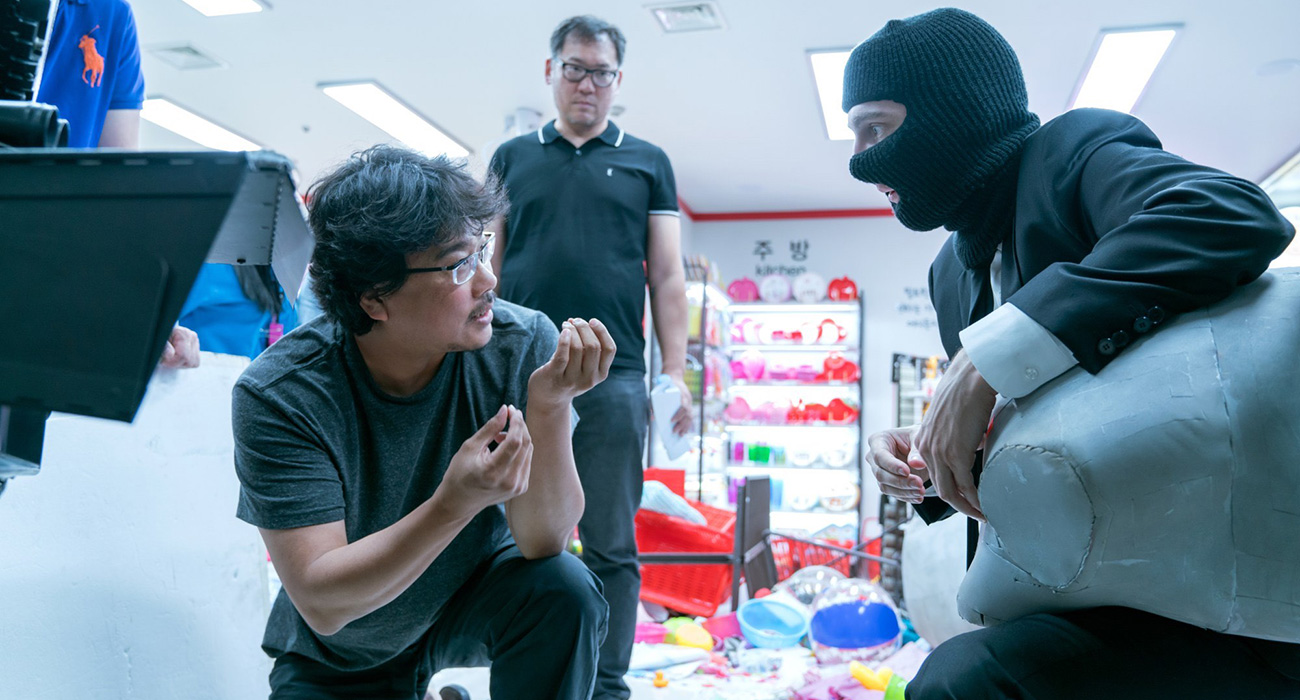 Director Bong working with Paul Dano during one of Okja’s thrilling setpieces.

Many of your previous films, most notably Memories of Murder and The Host, were at least somewhat based on actual events. Were there any actual events which inspired any part of Okja?

BONG (translated): For the film Okja, it’s not actually based on an event, but the characters themselves, such as the ALF [Animal Liberation Front], it’s a real life group. There was a lot of research done on that area.

I heard that the design of Okja, the animal itself, went through about 100 redesigns. How did you and concept artist Jang Hee-chul come to the final design?

BONG (translated): Himself [director Bong] and the creature designer Jang Hee-chul had to rely on the intuition of their senses for all phases of the character design. Their goal was the following, which was quite contradictory if you think about it now. They wanted to make a realistic looking animal, but an animal that nobody has even seen in their whole life. It’s an animal that lives deep in the mountains, but the audience after five seconds has to believe that it’s an actual animal that exists in this world. And also it had to be very lovely at the same time. So it’s a very difficult task.

I think you definitely achieved that [your goal].

BONG (translated): He [director Bong] received lots of inspiration and ideas from real life animals. For example, the manatee that lives in Florida. We call it the dugong in Australia, I think. It lives in the water but it looks very introverted and kind, innocent. It feels like it would often be wrongly accused [director Bong laughs]. 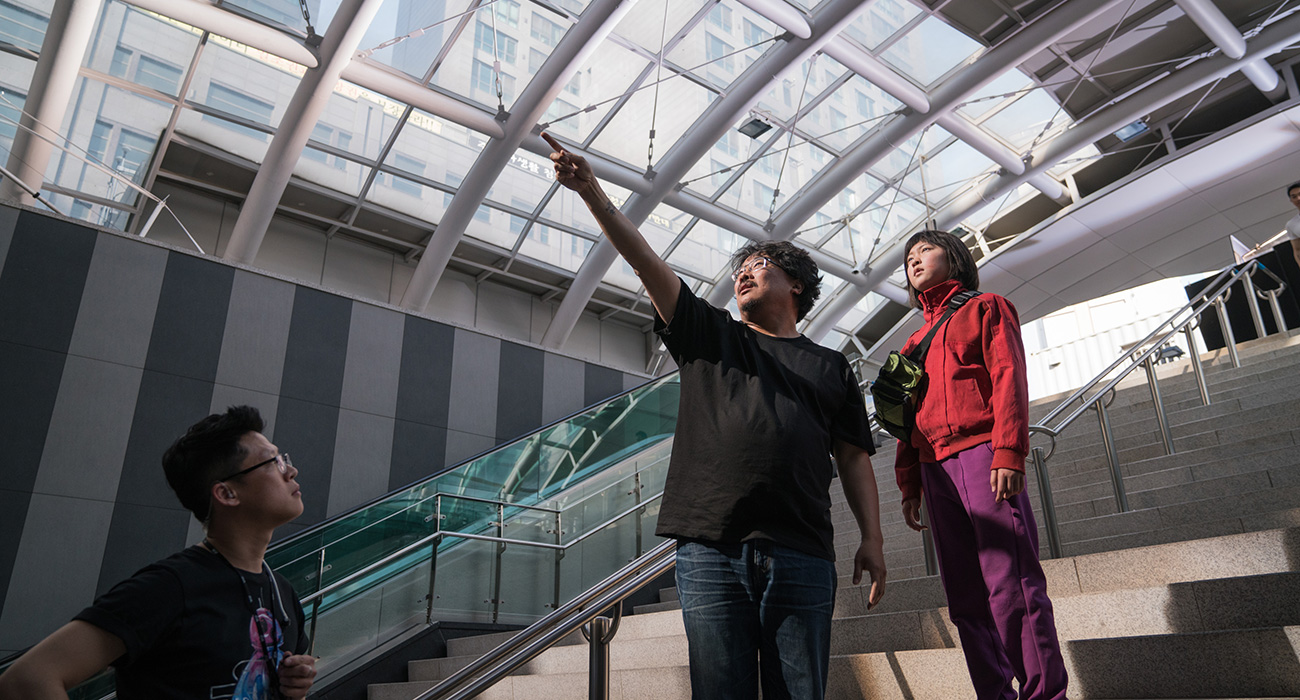 Newcomer An Seo-hyun shines as Mija in director Bong’s first film with a child as the leading protagonist.

This is your first film with a lead protagonist that is a child, and it’s mostly from Mija’s perspective. Why did you choose to frame it around Mija’s, or a child’s, perspective?

BONG (translated): I believe the structure of the story had naturally led him [director Bong] to map out the story like this. An entity that can most effectively connect with an animal is a child, but that’s not the sole reason. This film not only touches upon the food industry, but it’s also about the degradation of capitalism — how it’s a mixture of show business, marketing, and just corporate imagery. And out of this mayhem of this degradation of capitalism, he thought it would be effective if we contrasted with an innocent child; it will stand out even more. So that’s why he ultimately chose it.

Obsession with image culture, and also capitalism and the bond between animals and humans, are very prominent themes throughout Okja. But I also sensed a bit of a tension between traditionalism and individuality. Would you be able to comment on that?

BONG (himself): You mean some tension between Mija and her grandfather, or at the same time Lucy and her family?

BONG (translated): Although Mirando, the company within the story, tends to be modern, it’s very tied to the family tree and it’s almost pre-modern in some senses, and it’s almost like the corporations we see in Korea. So from the beginning, we can see that Lucy Mirando, played by Tilda, disses or makes fun of her grandfather from the get-go.

BONG (translated): But we can all agree that herself, Lucy herself, is a psychopath [director Bong laughs]. In some sense, this degradated[sic] family just seeps into the corporation. Although it feels it’s a like a clash between traditionalism and individualism, although Lucy Mirando is fighting to overcome the traditionalism, they fall short. He [director Bong] feels that Lucy’s failures are particularly sad to him, she always strives to be different from her father or grandfather or sister, and she always strives to be hip, but she falls short of doing so.

BONG (himself): She always says in the movie, “I’m different, I’m not like that.” But actually at the same time, she is very same to that, it’s quite sad. 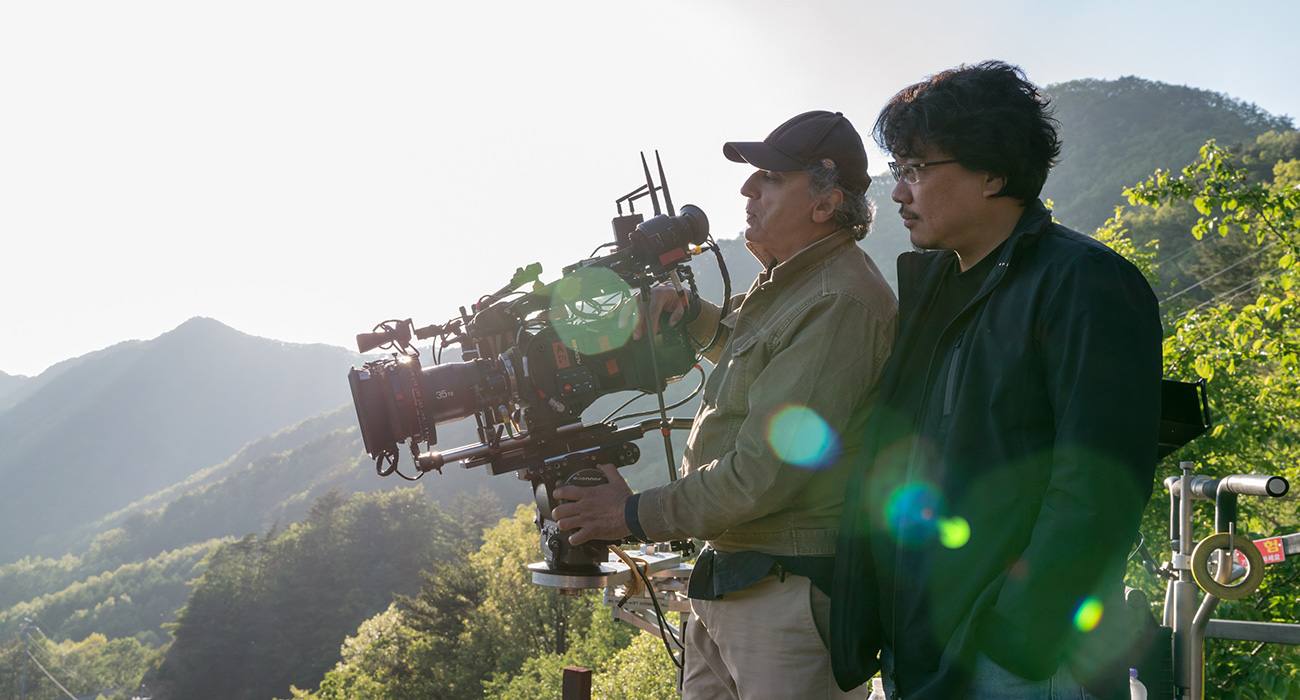 Okja is a bilingual film, working in two languages, and the film even notes a little bit on how there can be difficulties crossing language barriers. How involved are you in the subtitling or translation process for Okja‘s English release?

BONG (translated): Even in the last stages of the filmmaking, he [director Bong] delved deeply into the subtitle process. That’s because he had written the script himself, and from time to time he and Jon Ronson [co-writer of Okja] had discussed certain parts of the subtitles to him. Particularly for this film, translation is a very important story element and a part of the humour code of the film. He really wishes that it would be a sacred subtitle, a sacred translation.

BONG (himself): Maybe you understand Korean?

Yes, I picked it up. I picked up when they [the ALF in the film] jump off the truck into the Han River [that the subtitles did not match the dialogue]. I brought my native Korean friend with me, and I said to her “that didn’t sound right” when Steven Yeun says farewell to Mija.

BONG (himself): When he jumps, the original Korean dialogue is Steven Yeun to Mija: “Hey Mija! My name is, my real name is Goo Soon-bum”, which is very old-fashioned, funny name. So maybe Korean audience will laugh with the ‘Goo Soon-bum’.

Was there a reason why the subtitle was changed for English?

BONG (himself): It’s impossible to…

BONG (translated): It’s impossible, or almost near impossible, to translate that nuance into English. Although in Korea, the name Goo Soon-bum is a very cheesy, old-fashioned name, it would never translate well to English audiences. He [director Bong] figured that he may just come up with a different, off-beat English humour joke with Jon Ronson’s aid.

BONG (himself): Like your friend, maybe who knows Korean and English at the same time, they can be a little bit confused at the moment, but please understand.

Filmed in Ether would like to thank director Bong and his translator Jason Yu for speaking with us, Sydney Film Festival, and Catapult Public Relations for organising the interview.